© Alain Goulard / AFD
The first Finance in Common Summit on November 9 to 12, was hosted remotely from Paris by Agence Française de Développement. The mainly virtual gathering brought together public development banks to discuss the key issues of the 2030 Agenda and to initiate a new coalition. Here are 10 highlights of this unprecedented event.

A global coalition, a joint declaration

An ambitious joint declaration by the 450 public development banks (PDBs) shows that they have succeeded in forging a global coalition determined to work for the planet and its people. PDBs make 10% of global investments and play a role more important than ever, given the world’s current situation. Behind their common commitment is a determination to put their financing in line with the Paris Agreement, to support biodiversity, and to step up the fight against inequality—in particular with regard to gender. Some PDBs wishing to make further commitments on certain themes have made specific coalitions and additional declarations.

See also: The Finance in Common Summit, all our articles

Support from the French President and major international bodies

As part of the joint PDB statement, Emmanuel Macron emphasized that development banks, and AFD in particular, have a capacity for action in working towards a fair transition. The French President recalled AFD’s role as a platform that can mobilize all the actors of the financial system. The Managing Director of the International Monetary Fund, Kristalina Georgieva, and UN Secretary-General Antonio Guterres also stated their strong support for the concerted action of the PDBs.

This first summit of the world’s 450 PDBs was a chance for the development community to make a name for itself: 25 high-level events were held on topics such as adaptation and resilience to climate change, financing African economies, social investment, gender and biodiversity. These sessions brought together more than 100 panelists and were followed by 10,000 participants. On Twitter, the hashtag #financeincommon2020 was used more than 3,500 times.

The Finance in Common Summit also saw AFD Group commit to new large-scale projects alongside its partners. The objectives of those projects include supporting resilience to financial risk linked to Covid-19, eradicating famine and poverty in rural areas, promoting stronger resilience of health systems in Africa, and strengthening the climate financing of African development banks.

A database on PDBs, unique in the world

Prior to the two-day Summit, the 14th AFD International Development Research Conference entitled “The Visible Hand: development banks in transition” helped strengthen the concept of PDBs in the academic world. It helped demonstrate the role that PDBs could play in a development-oriented financial architecture with massive financing in line with the Paris Agreement and the SDGs. An extensive and unique database of PDBs, developed by AFD and Peking University, was presented at the conference. It is available as a data visualization website. The research conference also made it possible to publish 10 strategic recommendations to empower PDBs to fully play their role as “visible hands”.

$4 billion for the private sector in Africa

The European Development Financial Institutions (EDFIs), including Proparco (AFD’s subsidiary dedicated to the private sector), announced a support plan for African micro, small and medium-sized enterprises (MSMEs) of at least $4 billion, to be raised by the end of 2021. Because these enterprises generate by far the majority of jobs in Africa, helping to create, promote, and finance them is crucial from a global development perspective.

Gender equality as a core concern

The International Development Finance Club (IDFC), which brings together the world’s 26 largest regional and national development banks and is already involved in fighting climate change, also announced new measures at the summit. These include tools to achieve alignment with the Paris Agreement, consideration of the social dimension against the backdrop of the Covid-19 pandemic, and interconnections between climate and biodiversity.

See also: The Urgency of Adapting to Climate Change

A joint stand for a pro-biodiversity economy

The IDFC also announced a massive investment in the conservation, sustainable use, and restoration of biodiversity. IDFC members recognize the importance of public investment in in-depth changes that seek both to curb biodiversity loss and to enable long-term economic recovery. For that reason, they have joined forces to take a common stand to maintain natural capital and develop a pro-biodiversity economy. In their joint declaration, the PDBs stated their readiness to help align financial flows with the future post-2020 global biodiversity framework to be adopted at COP15 on biodiversity.

A broad coalition on sports for development was announced by AFD CEO Rémy Rioux and President of the Paris 2024 Olympic Games Tony Estanguet on November 11, in connection with the Summit. The Sport for Development Coalition is committed to strengthening financial resources, investments, and expertise to build a sustainable world together, in line with the Sustainable Development Goals. This initiative is accompanied by a powerful financing and networking tool: the Sport en Commun Platform. “More sport, more impact!” 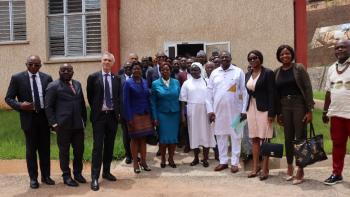