30 Years of Activity for Financial Inclusion

© Oriane Zerah / AFD
In Marseille, on Tuesday 9 July, AFD will be celebrating not one, but two very special anniversaries: its 30 years of activity in the field of financial inclusion and its 15 years of partnership with the Boulder Institute of Microfinance, which is marking the occasion by organizing its Boulder MFT training program in the City of Marseille.

It was the awarding of the Nobel Peace Prize that put financial inclusion in the spotlight in 2006. Muhammad Yunus received the award at the time for having created the first microcredit institution, Grameen Bank, in 1976. Back then, it involved lending money to people with no means and guarantees who were therefore excluded from the banking system.

“Grameen Bank’s gamble was that the poor repaid their loans better than the rich. And this was proved right!”, says Christine Poursat, coordinator in AFD’s Financial Systems Division. Following the first credit projects in the 1980s, inspired by Grameen and mutualism, all the development actors started to become enthusiastic about microfinance.

From microfinance to financial inclusion

“At the beginning, we spoke about microfinance, but little by little, the objective of targeting the excluded gathered a wide range of actors, microfinance institutions, but also banks, telephone operators, Fintechs… New services were offered to excluded people and companies, such as insurance or mobile banking. This is why we now speak about financial inclusion”, points out Christine Poursat.

In the 2000s, under the auspices of the think tank CGAP (Consultative Group to Assist the Poor), actors in financial inclusion played a trailblazing role, in particular by defining the financial sector’s first indicators of success. AFD played a major role in this. “We have supported all the developments in the sector and acquired real expertise and visibility in this field by developing a range of tools to support actors in financial inclusion”, points out Christine Poursat.

We have come a long way since AFD’s first foray into financial inclusion, back in 1989, and the financing of a pioneering project that subsequently became the first microfinance institution in Guinea, Le Crédit Rural de Guinée, which is still the leader today. The support, which was initially in the form of grants, was shortly after extended to loans in local currency – an innovative choice at the time – then to equity investments and guarantees, paving the way for financing microfinance institutions by the traditional banking system.

Cambodia, the Comoros, Tunisia… AFD Group – both AFD and PROPARCO – actively supported the first financial inclusion projects in the countries. Over the years, the Group has also invested in funds which refinance and provide technical assistance to the most fragile institutions. In short: it relies on trusted third parties to contribute to the development of the sector for the benefit of excluded populations.

Thirty years on, financial inclusion is central to the Group’s "financial systems" strategy.

For example, in 2019, AFD undertook to support the public reforms engaged in the Philippines for a digitalization of actors in the sector and to ensure greater client protection. With some forty projects financed every year, and the amount of commitments continuously rising for AFD Group, financial inclusion has a bright future.

The famous microfinance training program in French, Boulder MFT, will set up shop in Marseille from 8 to 19 July. Two weeks of intensive courses given on the campus of Kedge Business School during which 100 participants from the banking, regulatory, public, private and academic sectors or from NGOs will come to train in management techniques and digital policies and developments related to financial inclusion.

This training has been provided for 15 years by the Boulder Institute of Microfinance (BI), which will be celebrating its 25th anniversary next year. The Institute aims to help professionals from the financial inclusion sector better understand and analyze ongoing developments in order to effectively serve people excluded from financial systems in their respective countries.

BI has been a partner of AFD for 15 years now. The first stage in this partnership was the creation and implementation of the MFT program in French, which over the years has become a leading international training program in the financial inclusion sector. More than 6,500 professionals from 153 countries have been trained by BI since it was set up. 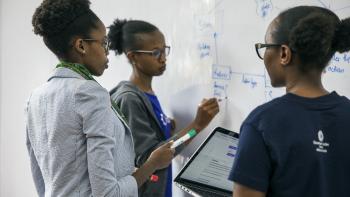