© Sonier Issembé / AFD
Adopted in 2013 and extended until 2018, AFD's biodiversity cross-cutting intervention framework (CIF) has undergone evaluation. Backed by a survey involving 800 internal and external respondents, the evaluation focused on the second objective of this strategic document, namely, the mainstreaming of biodiversity into all development policies. Below, we review the main lessons learnt from the exercise

The evaluation showed that AFD officers took less ownership of the guidelines and recommended tools than they did for other thematic strategies such as climate and gender. This CIF seems to have been less widely disseminated. As a result, the inhouse and external surveys carried out with AFDs partners and counterparts indicated that the Institution was not perceived as a biodiversity leader. 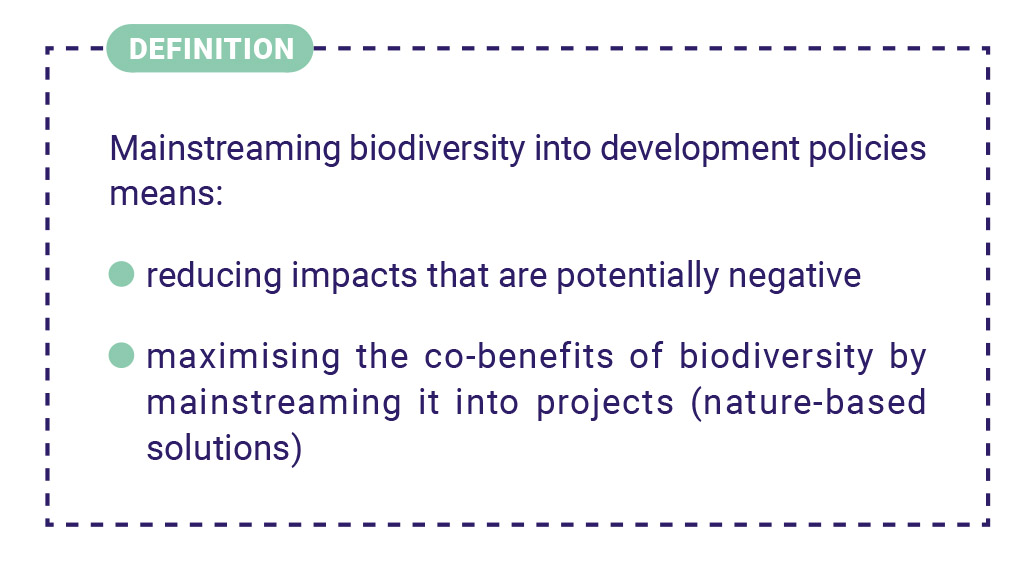 Although the approach to mainstreaming biodiversity is certainly relevant, the intervention logic chosen by this strategic document seems suboptimal. The evaluation observed a mismatch between the objectives and their sub-objectives, as well as an overlap between their various components (“facilitating private investments” and involving private investors in “sharing conservation costs”) (see p.29). Furthermore, the CIF does not clearly identify the responsibilities for its implementation or the associated human resources.

Combining both approaches is crucial. This long-standing issue once again became central to the debate during the latest international negotiations. As part of its Biodiversity CIF, AFD specifically aims to create a synergy between these two approaches: reduce the negative impacts of development projects on the ecosystems while maximising the co-benefits derived from biodiversity. This is a relevant guideline which draws on relevant tools to assist in implementing the crosscutting objective of mainstreaming biodiversity. However, these tools are limited to methods to reduce negative impacts. They barely deal with maximising the potential co-benefits of biodiversity projects, or in other words, reaping the benefits to be gained by integrating ecosystem balances into all sectors. AFD is working on this in the forestry, fisheries management and agriculture sectors, but other sectors remain sidelined (e.g., transport, energy and cities).

AFD set the target of doubling its financial commitments to reach €160 million per year as of 2013. This objective was exceeded with €284 million pledged annually between 2013 and 2018. The expected financing for cross-cutting Objective 2 has thus been greatly exceeded, showing +44% (versus +21% expected) of total commitments for the period 2013–2018.

AFD-initiated projects with positive biodiversity co-benefits mostly involve wastewater treatment and integrated water management and agriculture. AFD's other areas of activity are not represented. Yet, over the same period, projects with a high risk of negative environmental impact focused, in fact, on transport, energy, water and sanitation. As a result, no commitments were made for projects with positive biodiversity co-benefits for the period 2013–2017 in the energy, transport and education sectors (the situation is relatively similar for other membersof the OECD DAC).

The measures to reduce the negative impacts associated with the CIF's cross-cutting objective to mainstream biodiversity were satisfactorily implemented. However, while the integration of biodiversity impacts has been making headway at AFD, the financial commitments do not necessarily mean that this theme has been better integrated into the set objectives or the content of development projects.

The CIF evaluation highlighted that the framework's monitoring only allows projects with positive biodiversity co-benefits to be included in ODA accounting, whereas Objective 2 mainly lists tools geared to reducing the negative impacts of projects. If
the financial commitments related to negative impact mitigation are not monitored, this increase in commitments with positive impacts may give an incomplete picture of the impacts of AFD interventions as a whole.

The evaluation shows that reducing negative impacts is still considered a brake rather than a solution for development.
The institutions that design and implement AFD-funded projects are often difficult to convince when it comes to the challenges and benefits of biodiversity. In a number of sectors of activity, AFD officers themselves do not automatically perceive the projects as a source of potential positive impacts for biodiversity.

Moreover, the consultation carried out at AFD revealed that the institutions responsible in AFD's countries of
intervention are viewed as unable to bear the additional costs incurred by taking biodiversity into account. Other donors, however, manage to finance this type of measure through loans.

AFD is not is not the only donor to focus its financing for projects with positive biodiversity co-benefits mainly on sectors such as water and sanitation or agriculture. As underlined by a report published by the Organisation for Economic Co-operation and Development (OECD) in 2018, the other members of the Development Assistance Committee (DAC) have encountered similar difficulties in initiating projects in the energy and transport sectors.

More generally, the OECD has observed that the cross-cutting integration of biodiversity is insufficient in development projects. Efforts are needed not only to better communicate on the practical and concrete methods for biodiversity mainstreaming but also to better evaluate the results of these cross-cutting efforts in order to inform public policy about the feedback obtained.

This evaluation focused on the CIF's Objectve 2 (mainstream biodiversity) and its sub-objectives.
Objectives 1 and 3 have not been evaluated. Source: EY-Biotope Evaluation Consortium from the Biodiversity CIF 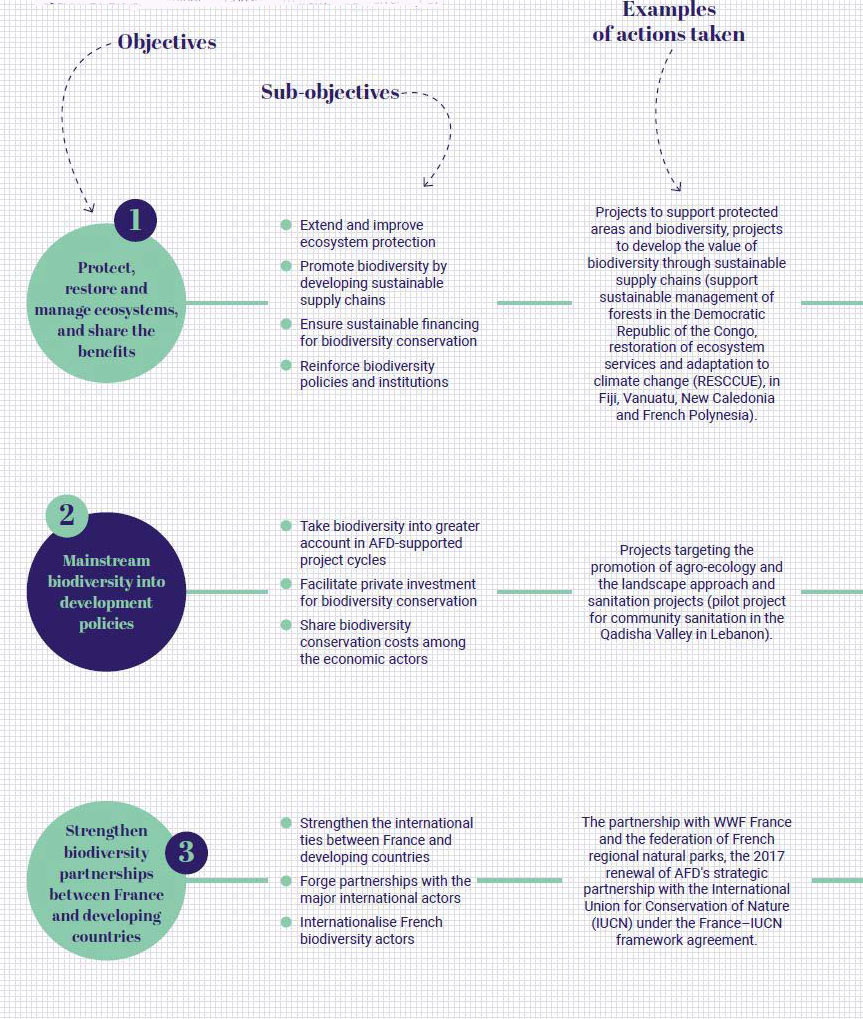