In Dhaka, Drinking Water Finally Makes its Way Into Slums

© Eau et Vie
Dhaka, the capital of Bangladesh is constantly growing and is seeing the sprawl of informal neighborhoods both in the city center and in the outskirts, which are deprived of basic services. The water authority and experienced NGOs are working hand-in-hand to provide clean and accessible water to 250,000 people. The result: a system of mini-connections at a low cost. A project supported by AFD and the European Union.

With one of the highest urban growth rates in the world, Dhaka sees its population increase every day. It has today reached 17 million inhabitants. Among these new city dwellers, farmers settle in the outskirts of the city, with the means at hand, in neighborhoods where there is absolutely no planning and where basic services are not provided. It is the start of marginalization. These informal neighborhoods – low-income communities – are home to almost a third of the city’s total population.

One of the main concerns of residents, whether or not they are newcomers: access to drinking water. Faced with growing demand, the collective supply network, managed by the Dhaka Water Supply & Sewerage Authority (DWASA), only manages to serve half of the population, leaving slums on the margins, where facilities are more difficult to install and less profitable. So, to get by, self-help and resourcefulness come into play: “home-made” – illegal – connections to the network spring up everywhere, supplying poor quality and often contaminated water, which poses a threat to the health and hygiene of residents.

The Government has not remained unresponsive to this alarming situation. In partnership with the water authority, it has set an ambitious objective for 2018:  provide drinking water accessible to all the residents of Dhaka.

In the field, national and international NGOs, for their part, did not wait to take action. They have been working in these neighborhoods for several years to connect houses to the network and sensitize households to water-borne diseases.

To support the Government’s target and continue its commitment in the sector, AFD has decided to assist DWASA, with European Union support. In addition, to fit in better with the context, it has called on 4 NGOs whose experience and firmly established local base are recognized. The objective of the project, which started in late 2017: supply water to 250,000 residents in the capital’s 18 slums via 3,000 collective or individual connections depending on the model of each NGO. A real “political commitment” according to Mustafiz Rahman, who works for DWASA. 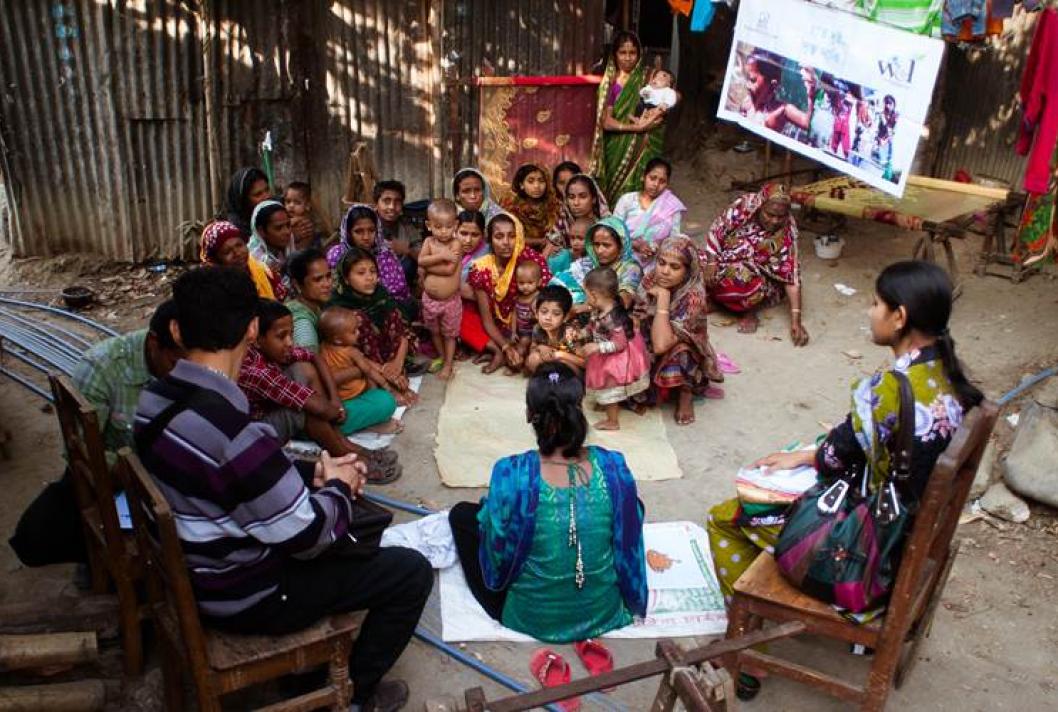 Cooperation between the water authority and NGOs is the key to success here. NGOs set up drinking water networks in deprived neighborhoods. The network which is built is subsequently connected to DWASA’s public network. These mini-networks thereby create a network at a low cost. In the case of semi-collective connections, an agreement is then signed between a community-based organization (CBO) and the water authority and the NGOs handle bill payments.

The water bill is sent for each pump, which is used by several families and managed by a CBO. It is essential for residents to be involved: as several families are responsible for the pump, it is often the case that no one takes care of maintaining it in good working order, leaving it up to others. With the principle of the CBO, a sustainable system is set up: everyone assumes their responsibilities and the maintenance and bills are taken care of.

The partner associations walk through the streets of these neighborhoods to meet the people affected by the shortage, to better determine their needs, their ability to manage a shared connection as a community… and to pay the bills. Each standpipe created will benefit several families who band together to share its use and its management. “CBO Chiefs” have been appointed to ensure the system works: they will be responsible for the maintenance and collection of money for each standpipe.

The NGO Eau et Vie has chosen another model: that of a tap in each house in the slum. This solution resolves both the problem of water storage, which is often a source of contamination, and of wasted time, especially for women and children who are generally responsible for this chore. Eau et Vie set up two local structures in Bangladesh for this purpose: an NGO (Water and Life) and a local company (SJP). An agreement has been signed to purchase water from DWASA. The social enterprise subsequently invests and builds the network, thereby supplying each family in the slum who requests so with clean running water. Payments are collected weekly by a network of collectors from these neighborhoods, in order to avoid debts and ensure there is a daily follow-up of the budget.

Another challenge is to convince the main stakeholders: residents who have to give up an already restricted living space to install tanks and networks.

When we meet the residents of these neighborhoods, they are far from being convinced by the project. But once the first connections have been installed, they recognize the benefit: the water is purer… and cheaper! Here, people are willing to pay an honest bill for high-quality water all year round, and for the guarantee that the infrastructure will be maintained in working order.

It is necessary to think of everything, particularly the “design” of the connections, to custom-build depending on the available space and feasibility in these areas of makeshift housing where the architecture is uncontrolled.

There is a true ambition: beyond simple network connections, the project aims to ensure that the facilities are viable, both in terms of maintenance and the profitability of the system. Indeed, while the Government’s commitment has prompted DWASA to connect an increasing number of slums to its collective network, the authority was until now not required to ensure the sustainability of the facilities (maintenance, payment of bills, etc.).

The negotiation was long: it was necessary to convince the water authority to entrust the supervision to NGOs for several years after the activation of the connections. It is quite a challenge: while the principle of the system based on the community’s commitment aims to achieve total independence in the long-term, ensuring it works properly can take time.

In the dwellings, the brick and cement tanks are beginning to emerge. These are the first steps, even if much still needs to be done: connect the new pumps and tanks to the DWASA network, but also train the CBO chiefs and continue educating the population about hygiene and nutrition issues.

The NGOs go even further than access to clean running water. The social enterprise set up by Eau et Vie offers additional services (waste management, sanitation), which are included in a single bill. With 50% of the team made up of people from the community, it also creates local employment. Finally, thanks to the activities for awareness-raising and training in fire prevention (for which most of the volunteers are women), Eau et Vie also works for women’s empowerment and gives them a real status vis-à-vis the community.

Everyone involved
In the slums of #Dhaka, #NGOs, the water authority and residents are working to provide accessible and affordable high-quality #water! An @AFD_eng and #EuropeanUnion project #Bangladesh 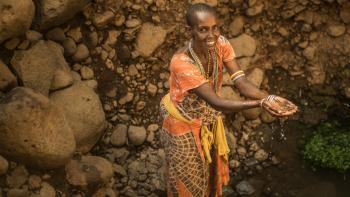