© DR
Implementing an e-government system has been a long-standing priority for Vietnam. Since 2015, the government has stepped up its modernization and digitization efforts for the benefit of users. Along with Expertise France, Agence Française de Développement (AFD) supports the Vietnamese authorities in this ambitious transition.

Vietnam is one of the most dynamic countries in the world, with a population that has risen from 85 million inhabitants in 2006 to more than 96 million in 2019. As a result, universal access to public service and the growing number of users have become key governance issues for the country.

The Vietnamese government first addressed the subject in 2015 and has since been working on modernizing and digitizing its administration. In particular, this is being achieved via a national portal for public services, launched last December 9.

AFD is supporting this transition through technical assistance, implemented by Expertise France which seeks to present Vietnam with tools that were recently developed for French citizens and to support the government in designing the reforms necessary for the establishment of an efficient electronic administration.

This portal seeks primarily to complement the existing supply of public services: “The opening and implementation of this tool is an additional channel at the service of people and companies to facilitate their procedures,” says Dr. Phan, Director of the Government Office's Administrative Procedures Control Department.

Physical administration centers will therefore remain open, especially for people who cannot or do not want to access online services. “In addition to the obstacles presented by equipment and accessibility, we must take into account the distrust that a part of the population has regarding online transactions and the difficulty of informing remote populations about this new platform,” says Dr. Phan. "We are therefore going to install it gradually, while maintaining traditional systems”

The digital portal also aims for continuous improvement in order to attract more and more users: “There will be regular updates to improve the functionality and quality of the information provided, as well as to optimize and personalize user experience.”

Several French tools have served as a model for the deployment of an e-government system in Vietnam, such as the service-public.fr portal and FranceConnect, a French digital identity management and electronic authentication solution.

A group of French experts worked in close collaboration with the Vietnamese government for several months to adapt this model for Vietnam: “During the exchanges that we had, we tried to take Vietnam's specific factors into account as much as possible in order to advise the best possible adaptations,” says Hervé Le Bars, an e-governance expert at Expertise France. “France's e-government was developed over a long period of time; we wish to share what we have learnt from our experience with our Vietnamese counterparts”

Other subjects were also covered in the exchange with French experts: “We received valuable support regarding the implementation of legislative framework, for example on the drafting of standards for online services, the standard conformity certification for declaration forms (CERFA), and even recommendations on personal data protection regulations,” says Dr. Phan.

A fruitful exchange according to Hervé Le Bars, who thinks the Vietnamese system could itself act as a model in a few years: “This experience was very enriching for French experts, who were able to understand new methods for implementing electronic administration. We believe that Vietnamese e-government experts will certainly be at the forefront of certain subjects within two to three years and could share their solutions and experience with other countries, including France.” 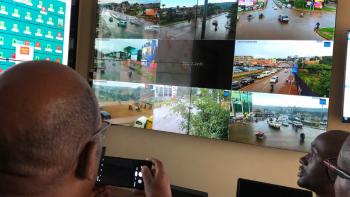 ASToN: digital transition for a network of 12 African cities