Bangladesh: Water for All in Dhaka

© Ashish Peter Gomes/AFD
Water and Sanitation
|
Infrastructure
Orients
Bangladesh:
Water for All in Dhaka
100,000
beneficiaries
In the Bangladeshi capital, finding drinking water is a daily quest for the most modest populations, occupying them to the detriment of their families and to their household income. Today, thanks to the joint efforts of the Dhaka Water Supply and Sewerage Authority, local NGOs, the European Union and AFD, these Dhaka residents are now connected to the drinking water mains.

Water shortages are now affecting over 40% of the world's population and Bangladesh is no exception. The capital, Dhaka, is facing a serious water supply crisis, in spite of the presence of five rivers and several canals, lagoons and lakes. Demand from the population and the city's rapid growth are placing even more pressure on its water resources.

The collective water supply system managed by the public water agency, DWASA (Dhaka Water and Sewerage Authority), only covers half the population's water needs. The informal, difficult-to-reach neighborhoods, which are home to 30% of Dhaka's 17 million inhabitants, are therefore marginalized. Illegal connections are more and more commonplace, but they do not guarantee access to clean water, and also damage the public water supply system and sewerage system. Furthermore, the lack of an official water supply service has led to the appearance of water "mafias" that control the supply and charge exorbitant rates to people in need.

The program backed by AFD and the European Union aims to install 3,000 connections in the disadvantaged parts of Dhaka. The work has been entrusted to NGOs specializing in the water sector and local organizations. The beneficiaries are also encouraged to take a responsible attitude to the maintenance of the system and the payment of their bills, thereby guaranteeing the project's sustainability. In Bhasantek, Shobar Jonno Pani (SJP, "Water for All") social enterprise works hand-in-hand with Eau et Vie in Bangladesh. This French NGO has installed individual connections for the inhabitants concerned. It also develops educational sessions on hygiene, the environment and fire prevention and aims to reinforce neighborhood committees by setting up sanitation, fire prevention and waste collection services. 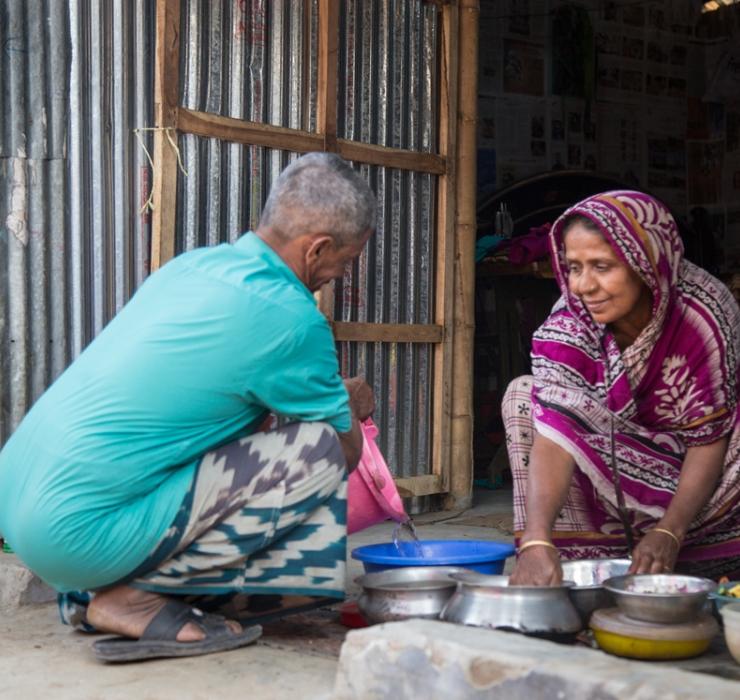 A collective action
Easy access to clean water at an affordable price remains a far-off dream for many inhabitants of the densely populated mega-city of Dhaka. Now, not only do residents in low-income neighborhoods have access to water, but the costs and risks involved in collecting water have fallen, making life much easier for many women and girls, such as Rahima (photo), aged 35, who works in a clothing factory and lives in Beguntila.

In order to ensure the sustainability of the programs, the participating NGOs have undertaken to provide their assistance for the four years following the installation of the connection . Furthermore, the DWASA receives support with logistics and human resources, in the form of technical assistance and in-service training for the department in charge of social programs.
For its part, the European Union has delegated an AIF grant (Asia Investment Facility) of €5 million to AFD, which comes on top of the AFD loan for Saidabad III. The agreement signed by AFD and the Bangladeshi government is intended to improve water supplies to Dhaka's informal settlements, to provide hygiene training and teach these populations how to manage and maintain these water points.

This grant also covers technical assistance to DWASA in the form of technical and human support for the LIC unit, a professional training program and the preparation of a long-term financial model in order to optimize investments.

Clean water at the front door
Jahanara Begum, aged 40, suffered from a shortage of water, along with all her neighbors: "We had to go and fetch water from a place a long way away. And the prices were high," she says. But everything has changed since the new water supply system was installed. "Now we pay our bill according to the water meter reading. We can also have baths more often and save time." The 15 members of the four families with whom she shares the water connection have also benefited greatly from the new facility.

Maya's life before and after
Maya Begum, 39, is a well-known personality in Kalapani Basti. Before, she used to work as a cleaner and she would ask her employers for just one bucket of water when she could. Otherwise, she would have had to spend hours at a water point collecting the precious liquid and she would not have been able to go to work. Now those days are gone.

Now Maya works for a community organization. She explains how the residents of the neighborhood coped with the many water-related difficulties they had: "We had to bathe in dirty open places. There are no words to describe that kind of poverty," she bursts out, thinking in the past. Maya, a resident of the Beguntila neighborhood, also remembers the illegal water suppliers who charged exorbitant prices.

With water available near her home, everythng has changed for swapna
At 25, Swapna is a housewife and mother of two boys. Before the water point was installed, she had to queue up for water. It took her so much time that she did not even have time to do her housework: "Just think how difficult it was fetching water from so far away to my house.. I was spending almost all my time on fetching water. And on top of that, there were days when we could not even get a drop of water!"

The stakes around this rare commodity are such that this white gold inevitably attracted its share of con men: "We had so many problems. There were even people who promised to find us a solution and took our money, but they never provided us with anything at all." Hence the inhabitants' initial wariness about this project. "We held an "Uthon Boithokh" [an internal discussion] among the residents to ensure that it was a genuine project, ' explains Swapna, And finally, we decided that we could trust them".

Has the situation changed since then? "Hugely!" exclaims and enthusiastic Swapna, "In the past, we paid a lot of money to water suppliers, but they never gave us a bill or a receipt. Now we pay for what we consume and we get a copy of the bill." Life is also a lot easier when you have water on tap at home. "The time I save can be invested in more productive activities and it gives me more time to spend with my family," confirms Swapna. 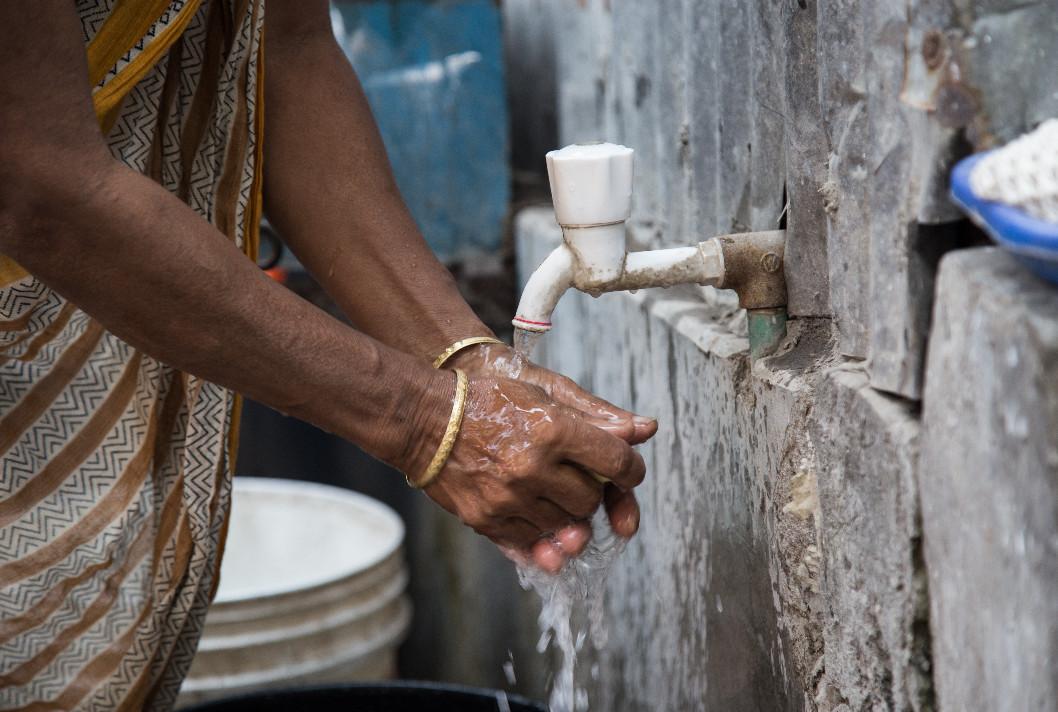 © Ashish Peter Gomes/AFD
The advantages of a community commitment

Fatema Akter, General Secretary of the low-income neighborhood development organization, Nagar Doridra Bosthibasi Unnayan Sangstha, thanked DWASA for its commitment to the community when it implemented the project. "It is encouraging to see that they have understood the need to involve the local residents in the work. If the community is involved, the outcome is more sustainable. It's what we have seen in this case", proclaims Fatema. Today, each member of the community has access to a water point that he/she manages independently, without the intervention of third parties.

As an inhabitant of the Korail community and a fervent advocate of citizens' rights, Fatema has seen how low-income communities all face the same problems. "Here for example, in the past, residents had to risk their lives crossing a large, busy road to go and fetch water. Not only did it take a lot of their time, but it also caused a lot of problems."

Furthermore, women sometimes have to give their labor for water or pay the suppliers in cash. "Before, given the complicated arrangements involved in getting water, these women could not work like their husbands and generate income for the family. They could not even lend a hand with other ordinary tasks. All of this also had an impact on family life, causing strife in some cases. Not to mention the pregnant women or elderly people who would have accidents while fetching water."

What have the impacts been?

This project has enabled the inhabitants of Mirpur and other neighborhoods to access clean water and improve sewerage facilities. For people like Ayesha Begum, aged 55, it has been a great relief. "We had to cover such long distances… they were difficult days… I still remember how hard my daughters and I had to toil to fetch water."

The project has also created a sustainable business model, one that is reproducible for all water supply systems in low-income areas. The stakeholders have promised to keep the initiative intact. A plan to extend the project is already in the pipeline. In addition, DWASA has benefited from the improved management of its system and seen a reduction in unbilled water consumption, as its operations are now more and more professional in informal settlements.

Forecasts predict that at least one person in four will be affected by recurrent water shortages by 2050. To provide access to drinking water at a price everyone can afford, it is absolutely essential to invest in water supply infrastructure and sanitation facilities and to promote hygiene at every level in the system.