Brazil: The challenges of Curitiba

© Zuleika de Souza for AFD
Sustainable Cities
|
Climate
|
Biodiversity
Latin America Brazil
Curitiba
Brazil:
the challenges
of Curitiba
30,000
passengers a day on the Green Line
EUR 36.5m
The amount of the loan allocated by AFD
30%
The proportion of the population benefiting from the redevelopment of the Barigui river banks
Faced with demographic pressure and an ever-increasing number of cars, Curitiba is stepping up its efforts to retain its image as the Brazilian leader in terms of sustainable cities and the fight against climate change.

When you land at Curitiba Airport, you rapidly get the picture. Posters invite travelers to go into the city by bus and be “sustentavel” (“sustainable”). Outside, you then see the first “tube”, the nickname for the city’s bus stops, which look like pipes, with automatic doors to get in the vehicle, like in a metro.

Even during the rush hour, the network in the capital of Parana, designed in the 1940s by the French architect Alfred Agache and extended by the Mayor Jaime Lerner from the 1970s onwards, allows quite a smooth traffic flow, both by car and bus.

But Curitiba has seen its population leap in ten years from 350,000 inhabitants to 1.7 million today (3.5 million for Greater Curitiba), while resting on its laurels. It is consequently faced with a paradox. While it has a bus rapid transit (BRT) network (a model which Curitiba has “exported” all over the world), it is losing passengers and Curitiba is now the city with the largest number of cars per inhabitant (1.8) in Brazil.

Since 2007, AFD’s operation has been helping it address the main challenges of its climate agenda: improve the quality of transport in order to reduce the number of cars and GHG emissions, but also adapt to the impacts of climate change by creating an ecological corridor. 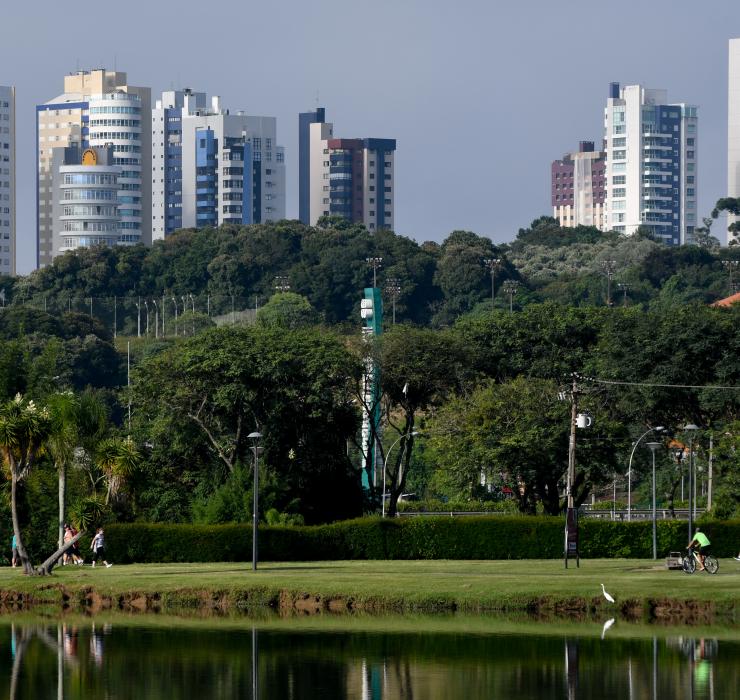 Jorge Brand aka "Goura", city councillor, Curitiba © DR
“Goura” and alternative mobility
Curitiba’s bus network is well developed, but is the city’s only means of public transport. For over ten years, the municipal councilor Jorge Brand, nicknamed “Goura”, has been pushing for a major extension of cycle tracks – they currently cover just under 200 km.

“There is very strong potential for the use of bicycles, but it is still too modest. If Curitibans prefer cars, it is also because the price of bus trips is one of the highest in the country (Editor’s Note: 4.25 reais, about 1.10 euros)”, says the city’s “Mr. Bicycle” with disappointment. “Curitiba’s public transport projects could achieve excellence with the systematic integration of cycle tracks, as is the case with the Green Line.”

Barigui park, Curitiba © Zuleika de Souza for AFD
Green belt
Curitiba is a city with a “green belt”, meaning parks, most of which are in the west of the city, along the Barigui River. Ninive Oricolli, a 56 year-old pensioner, goes there several times a week.

“We have many wonderful parks, which are ideal places to contemplate the lush nature and local wildlife. A lot of people go to them because they are well organized. You can walk in them, run, ride a bike, play sports and have a picnic”, she says. “The City Hall has done a lot for the city’s green spaces and residents of all social classes and from all over the region use them all the time.”

© Zuleika de Souza for AFD
Taste for public transport
They had been thinking about it for two years, but they only actually did it a few months ago. Bianca Zbuinovicz, 27, and her French husband Lucien, both French teachers, have sold their car and now only use public transport.

“Since I was a kid, I’ve always been told that Curitiba is an ecological capital, that the residents are proud of this, and I would in turn like to show my future children that we don’t always need a car”, explains the young Curitiban. “The bus network may not be perfect, but it works well, you don’t have to wait during the rush hour and the main lines have useful information tools.” 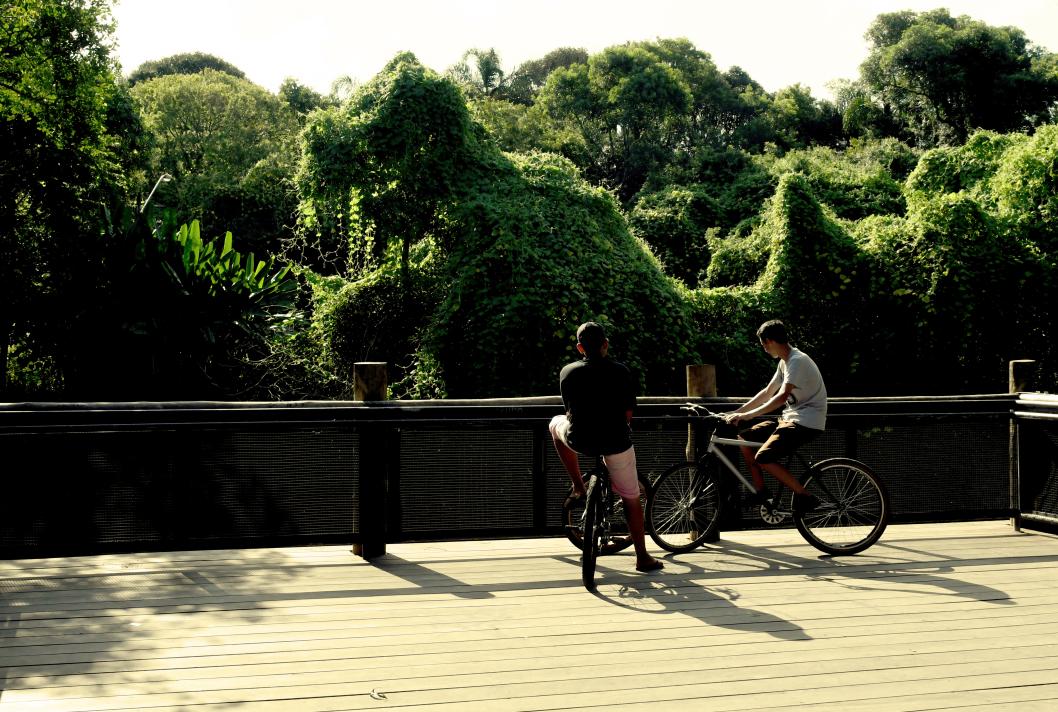 The city’s gradual extension by the South has not been combined with the solutions adopted in the North to regulate its river flows (flooding, pollution). This has proved damaging for the state of Barigui River, which is flanked by a number of informal dwellings. The ecological corridor financed by AFD is making up for this shortcoming and setting the city on a path towards adaptation to climate change.

It involves recovering biodiversity by redeveloping the river banks and creating four new parks. Residents in the illegal areas are either rehoused or can stay in their regularized homes. This project fits in with one of the initiatives of its future climate agenda – environmental development. It also involves urban revitalization (Green Line, LED lighting, green buildings…), urban mobility and the Smart City concept.

This revitalization is combined with an environmental education program, “Olho d’agua” (“eye of water”), in which students from 30 public schools in the area are participating by monitoring the quality of the water of Barigui River.

“This project will improve the quality of life for the residents of these low-income neighborhoods with free leisure facilities”, points out Leonardo Werneck, project manager at I Care Environment and a consultant for AFD. It has in fact completely transformed the area: “In the process, residents have started renovating their homes and new shops have opened.”

“Curitiba has always been a place where new things can be tested, in all fields, from creating parks to selective sorting and including the BRT concept, which was born here!”, says with pride Ana Jayme, Director of the Municipal Secretariat for Planning, Finance and the Budget. All this is concentrated in the “Linha Verde” (“Green Line”) project, which constitutes a real urban revitalization planned over a 30-year period.

This revitalization concerns some 20 neighborhoods which have sprung up along an old highway, which originally bypassed Curitiba by running across the South-east. As it is now an integral part of the city, a 6th BRT line, the Green Line, was added in 2009. It is planted with trees and also combined with a cycle track. Its extension towards the North, which should be completed next year, has been financed by AFD.

“The Green Line meets significant demand from the residents of the City of Curitiba and even though it is not finished yet, the positive results are unquestionable”, points out Leonardo Werneck. “Our forecasts show a real reduction in greenhouse gases”, he adds. The articulated buses on the Green Line run on biofuel, with the objective of eventually making them electric, whereas an increasing number of buses on other lines are hybrid (3.8% of the 1,500 buses currently in circulation, with a target of over 10% by 2020).

With this combination of efficient urban mobility projects and the redevelopment of all its natural components, the capital of Parana hopes to retain the advantages that make it an “exotic” city in Brazil: green, clean and well organized.