© Zuleika de Souza / AFD
Water and Sanitation
Latin America Brazil
Santa Catarina
Brazil:
Wastewater in Santa Catarina
finally treated
200,000
people concerned
500
km of sewers added to the network
9
wastewater treatment plants built
Since 2012, the Water and Sanitation Company of Santa Catarina (CASAN) has been implementing an ambitious project to improve the treatment of wastewater from cities in the interior of the State in southern Brazil. The initiative is reaching 200,000 people and offers a whole host of benefits, as it contributes to preserving the environment, reducing health expenditure and developing the tourism heritage.

Deep trenches split the paved streets into two in the popular neighborhood of Nossa Senhora Aparecida, in Curitibanos. Workers are installing the city’s new sewer network in them, whose wastewater will be directly treated starting at the beginning of next year by the new wastewater treatment plant under construction on the heights of the city.

As with sixteen other municipalities in the interior of the State of Santa Catarina (Rio do Peixe and Center-South coast regions), Curitibanos is a beneficiary of the Environmental Sanitation Program for Medium-sized Cities (30,000 to 40,000 inhabitants) implemented by CASAN since 2012 and financed with EUR 100m by AFD. The objective is to provide them with a sewer network by the summer of 2019, initially collecting 20 to 50% of their wastewater – a total of 500 km, 40,000 connections reaching 200,000 people, as well as nine new wastewater treatment plants.

This program is part of a comprehensive sanitation project for the whole of Santa Catarina, financed, for the other regions, by the Brazilian Government and other international organizations. While the State is the 5th richest in Brazil in terms of GDP per capita, it is indeed currently only 16th (out of 27) in terms of wastewater treatment (15% of the population, against a national average of 55%). When all the ongoing programs have been completed, Santa Catarina hopes to reach Brazil’s top 5, with 45% of the population covered. 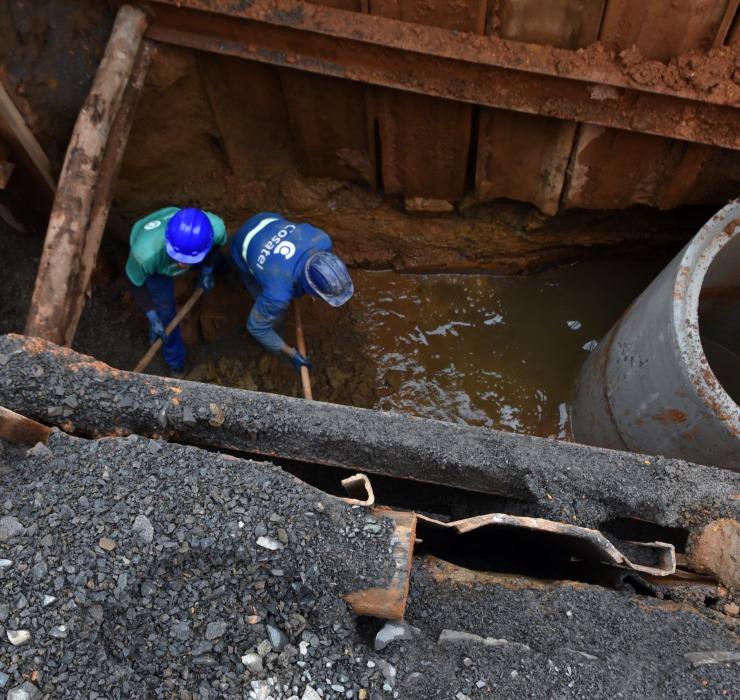 © Zuleika de Souza / AFD
Luciana Franca da Cruz, extensive educational work
All the residents of the State of Santa Catarina do not really know about Dona Janete. Unlike access to water and its treatment, it is not directly visible and both its implementation, with imposing works, and its cost can cause misunderstanding. In Curitibanos, it is the social worker, Luciana Franca da Cruz, who is tasked with dispelling the doubts of residents, particularly the most popular classes.

The young woman points out that it is the financial aspect which residents are mostly concerned about. “The main question which comes back is: How much is this going to cost us?” is the example she gives. The municipal authorities already estimate that its amount is expected to double – from about 10 to 20 euros a month. So, in addition to preventing diseases and preserving water and the environment, Luciana Franca da Cruz does not hesitate to put forward the increase in the value of property among the benefits highlighted.

© Zuleika de Souza / AFD
José Antonio Guidi, a mayor with a concern for the future
Fifty years behind. For José Antonio Guidi, the Mayor of Curitibanos, when medium-sized cities like his grew, “access to water and sanitation should have been the priorities”. The result: his municipality has one of the worst urban development rates in Santa Catarina, according to him. It is consequently the municipality where the financial investment (EUR 10m) of the CASAN program has been the highest, which will allow it to make “a major leap forward compared to the other cities in the country”.

Even if the impacts of sanitation will only be visible after the end of his mandate, José Antonio Guidi is content to leave a positive legacy, particularly in terms of public health and the environment: “It’s like education, we think about the future, not just about the term of our mandate, about transforming a society to offer it a better environment”.

© Zuleika de Souza / AFD
Dona Janete and the future of her children
“If we don’t invest, there will never be a future for our children”. Dona Janete Fatima Rosa de Lima runs a small bakery in Curitibanos. Despite the many inconveniences related to the works to install the city’s new sewer network (mud, dust, noise, road closed to traffic, water cuts…), the shopkeeper is aware that they are necessary.

“It is people who are not very well-off like us who suffer the most from the consequences of having no sanitation: the children ill, floods… We have to make sacrifices, but it will be better after”, she points out.
High-end wastewater treatment plants

The CASAN project comprises nine new high-end wastewater treatment plants, most of which are compact models, depending on the size of the city. Three are at present in service, in Chapeco for two years and since the end of last year in Canoinhas and Braço do Norte.

In Curitibanos, the construction site for the future wastewater treatment plant, a more imposing model than the others in the State, is making good progress. It started in June 2016 and should reach completion next November. “It will treat 40% of the city’s wastewater and subsequently discharge water that is 95% to 98% pure”, explains Marcio Rosa, one of the construction engineers. A lesser evil compared to the current situation: “Today, most of the city’s water points and courses are polluted”.

Sanitation does not have as much impact in terms of image as access to water. Yet it will have multiple long-term benefits for Santa Catarina, including major economic benefits. Firstly, a significant reduction in wastewater discharges into the State’s watershed will have the dual impact of allowing an environmental restoration of water courses and the coast and, consequently, the development of its tourism potential.

Many illnesses are disseminated by water pollution and particularly affect the most popular classes, which often live near water courses. If they are cleaner, their neighboring residents will consequently be less exposed to illnesses, which in the long term reduces public health costs. As in Curitibanos, the cities of Santa Catarina will then be able to devote their resources to other sectors awaiting attention, according to José Antonio Guidi: “These reductions in expenditure will benefit education or infrastructure”.

High-end water treatment
In Santa Catarina, a preserved environment, lower health expenditure and a tourism heritage developed: all this thanks to #wastewater treatment! Find out how on the website of @AFD_France! #Brazil #water #sanitation