© Chor Sokunthea / AFD
Agriculture and Rural Development
|
Water and Sanitation
|
Employment
|
Infrastructure
Cambodia
In Cambodia,
irrigation helps
weather climate change
It’s mid-November and the rice fields in Khvaek village are in full bloom. Fat, golden grains droop from their green stalks. Any day now, the farmers living here will hire a combine to harvest the rice. It will be threshed, dried, poured into 50 kilograms bags, and sold off. And then, they will begin planting it again.

Until recently, few in Cambodia’s Kampong Thom province would dream of growing rice more than one time a year. While several small rivers run through this area -- located about halfway between Phnom Penh and Siem Reap cities -- there was no reliable way to access water year round. Water could be collected only via wells, an expensive and time consuming process.

In recent years, climate change has made living here even more difficult. Some years, the droughts are so bad that there is simply no water to collect. To make ends meet, most families here would migrate during the dry season--taking on risky physical labor on Phnom Penh’s construction sites.

But with the advent of a rehabilitated irrigation system, life here is beginning to improve measurably.

In 2000, the French Development Agency (AFD) and Asian Development Bank inked an agreement with the Cambodian government to fund and support the rehabilitation of the Khmer Rouge-era Stung Chinit irrigation scheme. Nearly a decade after its completion, the 26 million euro project has brought a network of canals to thousands of farmers. The irrigation has allowed farmers to diversify their cropping, planting vegetables in the dry months. In some parts it has even allowed for the water-intensive practice of multiple rice plantations in a year. 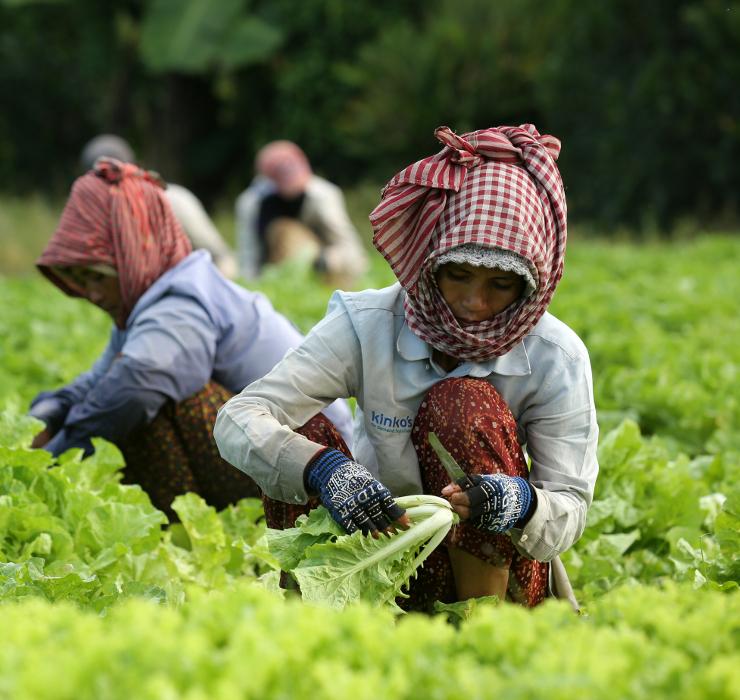 © Chor Sokunthea / AFD
Kan Nang talks about his life improving
Kan Nang, a 59-year-old farmer lives in a small house surrounded by a massive vegetable garden. When visitors arrived, he proudly showed off elaborate trellises dripping with gourds, rows of lettuce, and his two cars--the only ones in the village.

“My livelihood has increased about 30 percent since before they rehabilitated the canals. For rice productions, it’s 70 percent increase. Before, I could only grow once a year. Now I can do it two or even three times.”

With his extra income, Nang bought land to pass on to his children--its value has already skyrocketed from about $200 a hectare to $10,000.

“You don’t have to go to another country or province to see the difference. Just two kilometers from here, where they have no irrigation, it’s dry now,” said Nang. There have been problems with mismanagement over the years, but if the irrigation scheme were running perfectly, Nang is certain his community would be wholly immune from the effects of drought and floods. “There would be no problem with climate change,” he said.

© Chor Sokunthea / AFD
Chun Peng Long on how irrigation helps fight climate change
Cambodia runs on a seasonal flood pulse cycle. From May to November, monsoon rains swell the country’s lakes, pushing water and nutrients into the surrounding land. When the rain stops and the water recedes, However, there are fewer places where the soil remains rich enough or the water abundant enough to grow dry season crops. Even in the Angkorian era, irrigation was a crucial means of maintaining agricultural productivity. Centuries later, climate change and a growing population has made water access more important than ever.

“The canals help climate change adaptation,” said Chun Peng Long, the director of the Kandal province water department. “They can bring water in a drought and if there is too much flooding, they can move water from the flood zone to the river. It serves as a kind of regulator.”

In Kandal province’s Saang district, located about 30 kilometers from the capital, AFD has helped rehabilitate 7 prek canals. The 2000-meter-long canals run roughly west to east from a flood plain into the Bassac river. On either side are hundreds of plots of land filled with fruit orchards and vegetable plantations. Like the irrigation canals in Kampong Thom province, the prek in Kandal have replaced ground wells and allowed for year-round cropping, even during dry years.

© Chor Sokunthea / AFD
Chhuon Kim Sreng on how his family’s life has improved thanks to the rehabilitation
Chhuon Kim Sreng is just one of the farmers who have reaped the benefits of the rehabilitated preks. It’s the start of dry season, but he proudly shows off his crops of long beans. When those are harvested, in two months, he’ll rotate to bitter gourd and then on to sugar cane. Before, he planted only once a year.

“My life has improved quite a lot compared to five years ago,” he said, with a smile. “With the revenues, I’ve rehabilitated my house and had more money to educate my kids. I also bought all three of them motorbikes.”

Before he could plant year-round, Kim Sreng had to frequently borrow money in order to feed his family. His wife had to work as a laborer for another farmer to help pay off the debts. Today, he can support his whole family.

“It would be good if all farmers had this. It would induce them to grow more.”
"Vegetables everywhere"

Huot Chanthou was making her way to the market when she stopped to extol the virtues of the canal. On the back of her battered motorbike sat an overflowing bag of lettuce, one of several crops she grows in rotation.

“It’s much better now,” she said. “I can grow many things, and I spend far less money on pumping. There’s a better access road--you can just go to the next village to see how bad the road used to be.”

When the canals are rehabilitated, the roads are too, giving farmers better access to both middlemen and the markets directly. The AFD project ensures that community facilitators then come in to help farmers negotiate better prices, improve their techniques--such as by switching to organic farming, which brings more money--and market their crops. The upkeep and management of the rehabilitated canals, meanwhile, comes from the community itself.

But change can come slowly. In some areas, those elected to run the canals manage them poorly, or even embezzle the fees. Even when the irrigation schemes are well-run, it can take years before farmers are comfortable to change the agricultural practices they have carried out their whole lives.

In Kampong Thom, a canal runs the length of Sa’ang village -- separating the homes from small  plots of farmland behind them. Water from this drainage canal is controlled by a gate maintained by the Farmer Water Users Community (FWUC) and supported through dues paid by each farmer. Already, some of the rice fields have been harvested and replanted with neat rows of lettuce and morning glory.

In this area, people pay fees only when they are planting rice. The FWUC is eager to encourage people to grow crops during the dry season and they don’t charge for water use once the rains stop. Slowly, they have managed to change the behavior.

And as residents are becoming comfortable planting dry season crops, village life here is changing. Before, every dry season would see a mass exodus of men and women seeking seasonal work in factories, construction and as field hands in other provinces. Grandparents would take care of grandchildren and parents would resign themselves to long months away carrying out dangerous labor for scant wages.

“Before irrigation, people migrated to other places for labor. Now, we’re starting to organize our life around the canal. We’re figuring out ways to grow in the dry season and to find other opportunities closer to home,” said Oun Narin, a 28-year-old farmer. Two years ago, she and her husband stopped going to Phnom Penh to work in construction. He found construction work closer to home--poorer paying, but a cut they could afford thanks to the vegetables Narin can now plant and sell during the dry season.

“Before this canal was fixed you would only see grass back here to feed cows. Now, with the canal, if you come back in a few months you will see vegetables everywhere.”