Cameroon: Construction That Changes A City And Lives

© Alexander Schuecke / AFD
Mobility and transport
|
Gender Equality
|
Employment
|
Infrastructure
Cameroon
Cameroon:
Construction That Changes
A City And Lives
In Douala, the economic center of Cameroon, the government has launched large-scale construction projects to rehabilitate National Route 3 (NR3), a vital axis that is the backbone of the country’s life. Behind this colossal program are the men and women who, for months and even years, have worked to change the city. An exhibition inaugurated on April 18 in Yaounde recounts their singular pathways.

Almost all national commerce passes through Douala on the NR3 highway that crosses the city. Connecting east and west, Yaounde and Douala, the port and the airport, it is one of the main roads of Central Africa.

But roadway infrastructure has been deteriorating for many years, traffic is oversaturated and transit time can take several hours during peak periods. This situation not only threatens the economy, but also the most vulnerable of users, including moto-taxi passengers and pedestrians, who risk their life each day with infrastructure that has come to be dangerous.

It did not take long to get a response from the Cameroon authorities. Three worksites were launched to rehabilitate NR3 access east and west of Douala and build a second bridge over the Wouri River.

Completed in 2017, these projects have allowed redesigning over 30 km of roadways in the city center. With broader roads, landscaping and roadways tailored to different types of uses, this infrastructure facilitates urban travel, improves travel safety and enhances the living conditions. The project has also created a substantial number of jobs. The Ministry of Public Works and AFD, the main program supporter with a contribution of 300 million euros, have promoted the use of local skills and know-how.

This project has boosted the local economy and, above all, enabled the men and women of Cameroon to work towards the development of their country. As worksite supervisors or engineers, they have contributed to making the project a reality. They tell us their story. 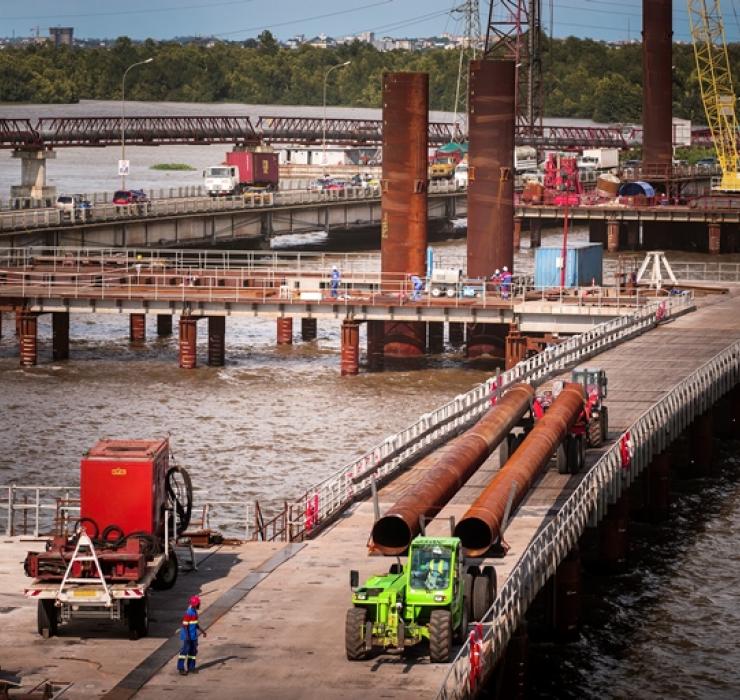 AN EXAMPLE FOR THE YOUNGEST
Jean-Paul is head of the company Fochou Planete, one of the subcontractors for the east and west Douala access worksites. “Because of the good work done on the east access, I won a call for tenders for the west access. This ambitious project enabled me to carry out certain things for the first time.” This experience boosted his confidence, enriched an already illustrious career and gave some very impressive references to his name.

Jean-Paul sees his future in Cameroon. “Today, going to Europe doesn’t interest me anymore. I want to continue working in my country, where there remains a lot to be done. I want to participate in developing my country.” And he wants to help the young; “I want to take young people under my wing and train them so that they can become more independent and confident.”

Today, his company has a turnover of 600 million CFA francs and employs local labor. “A source of pride” for this young entrepreneur who likes to make things happen.

© AFD
RACHEDATOU: “IN THE FIELD, PEOPLE SEE THE WOMAN BEFORE THEY SEE THE ENGINEER.”
A graduate of Yaounde Polytechnic, Rachedatou is a civil engineer, a profession that remains uncommon for a woman. In the field, prejudices are tenacious and twice the effort is demanded to be recognized.

“People see the woman before they see the engineer. We need to put stereotypes behind us. No, this job is not exclusively reserved for men,” explains Rachedatou. “We women have the same abilities, and we have the same training.” On the access worksites east and west of Douala, this engineer managed a team of four people every day and followed the administrative, technical and financial aspects of project implementation. She even presided over meetings with companies, the urban community and the Ministry of Public Works.

A role and project Rachedatou is proud of; “this is the first time I’ve worked on such major worksites in terms of size and impact on the population.”

DAMO: “THANKS TO MY JOB, I’M MAKING MY CHILDHOOD DREAMS COME TRUE!”
Damo, a structural engineer, worked on the second bridge over the Wouri River. He acquired his expertise from studies in Germany, financed by a scholarship from the Republic of Cameroon, and during work abroad. For him, going back to his roots was a natural choice. “I was in Germany for ten years, but it’s as if I were nothing but a drop of water in the Wouri. During this time, the roads were deteriorating in Cameroon, and the need for qualified workers was growing strongly.” So, Damo went back to Cameroon and took on one project after another.

His job has enabled him to fulfill a childhood dream of creating objects that will stand the test of time. The bridge over the Wouri embodies the vision that “not only will it facilitate traffic flow but also contribute to the beauty of the city with its shapes that represent the Sawa culture.”

He enjoys sharing his profession and field with the young interns at the worksite, and he would like for the people of Cameroon to make it their own one day. “With a bit of experience and practice, Cameroon engineers would be able to carry out this type of construction by themselves.”

FROM KOKI VENDOR TO... MACHINIST
How did Liliane start out at the second bridge over the Wouri worksite? She sold “koki”, a small traditional cake from Cameroon! This was before fate decided otherwise; “one day, I asked one of the workers to let me try his “claw,” the tool used to shape an iron bar. I did such a good job that the site manager asked me if I’d like to be an iron worker. I accepted without a moment's hesitation!”

Her enthusiasm and willpower won over even the most skeptical. “For the workers, it’s a man’s job. They didn’t think a woman could do it. But in the end, I could do it better than the trained iron workers.”

Liliane didn’t stop there. She learned how to use other machines, she formed teams and was even able to undertake training, such as in first aid. The bridge changed her life; “working here was a stroke of luck for me. From start to finish, I put my heart and soul into this worksite.”