Cameroon: At the School of Participatory Development

© Rodrigue Mbock / AFD
Agriculture and Rural Development
Africa Cameroon
Cameroon:
At the School
of Participatory Development
Working in Cameroon’s towns and villages, the National Participatory Development Program (PNDP) sets up and supports development projects across the east of the country and beyond. Supported by AFD and the European Union, these projects place rural communities at the heart of a programs whose sustainability will depend on continuing community engagement.

Rural development plays a significant role in Cameroon’s economy. In a country where close to half the population lives in rural areas, new funds can affect many people.

With support from AFD, the EU, World Bank and German development bank KfW, the PNDP serves the East, Adamawa and the North, and coordinates the roll-out of thousands of projects in partnership with municipalities throughout the country.

Since the PNDP began work in 2004, it has coordinated and carried out thousands of projects with local communities on a scale that is hands-on and participatory, using technologies that suit local needs.  A series of case studies illustrate how they’re playing out today – and what’s at stake.

A series of case studies illustrate how they’re playing out today – and what’s at stake. 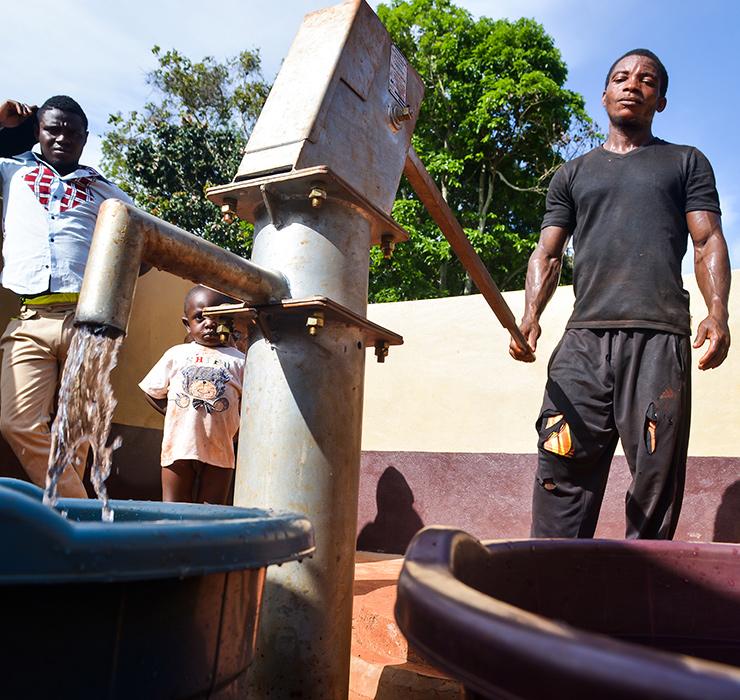 Previous Pause Next
1 of 5

© Rodrigue Mbock / AFD
Practical experience and Pedagogy
His back ram-rod straight, Englebert Massa Kella towers above those around him. The head teacher of Toungou Aéroport public school in Mandjou presides over a school that has received fresh funding – which was much needed after a rough start.

Founded in 2016, the school was a collection of huts made of provisional materials. That changed with the European Development Fund – money from the European Union, channelled through the PNDP. The project has resulted in the construction of an administrative building and several solid cinder-block classrooms equipped with desks – a far cry from the feeble wooden planks of before. Washrooms now have running water.

The school head grimaces at the mention of the former working and studying conditions. It was not just the dilapidated buildings; it was the lack of latrines, which meant there was little privacy between students and teachers, who were forced to relieve themselves in the surrounding bushes.

“The teachers and I taught the pupils lessons hygiene and sanitation,” says Engelbert Massa Kella. “Unfortunately, due to the lack of facilities, we watched them do exactly the opposite of what we taught them and were unable to do anything about it.”

But that was then. “Even in the most difficult conditions, this school has trained young people, many of whom are now the pride of the municipality,” says Massa Kella. “There is no way we are stopping now. The addition of new infrastructure is an additional source of motivation, for both the children and the teachers, to keep moving forward.”

© Rodrigue Mbock / AFD
Seeing through the Cracks
Maïmouna’s days start with a kilometer-long walk to Toungou public school, where she’s a Year 4 pupil. She meets classmates, and they shout and race each other on the way.

Like most of her peers, she used to learn her lessons in a ramshackle hut with a clay floor. The ceiling was made of woven palm leaves, which rotted quickly and had to be changed often. As the wind whistled through the wooden planks she could see between the cracks, outside. The first drops of the rainy season were falling, signaling a heavy downpour – and the end of class. Knowing the building would not withstand the elements, teachers dismissed their students: “It’s going to rain, time to go home.”

Blissfully unaware of the risks posed by the rain, Maïmouna saw only a playground. One afternoon, she got caught in the rain, and hopped over the puddles. Once home, the girl met with her parents’ consternation: the hard-earned books and school materials had been turned into a soggy pulp in her drenched schoolbag.
Today, Maïmouna’s studies are no longer stopped by the rain, except for when the downpour is so strong that the pounding of the roof makes it impossible to hear. The school is now housed in new buildings, thanks to the work of the municipality, funded by AFD and the European Union.

© Rodrigue Mbock / AFD
The Hazards of Drying Casava
Central to the regional diet, cassava production can be both difficult and dangerous.

Sonya, 25, had to carry a large, cumbersome plastic tarpaulin, which she would then put on the roadside, to prepare the cassava for sale. But first, the oblong tubers must be pulled up, cleaned, soaked and dried.

“If it is not dried properly, it can become moldy and the entire crop will be contaminated.”

Being close to road traffic will increase business, but it’s risky. Sonya, and many others who depend on the production and sale of cassava, work in hazardous conditions. With vehicle exhaust fumes, dust and debris threatening to contaminate the farmers’ produce, they’re in a race against time to have the cassava dried and ready for market, unblemished.

Locals like Sonya spoke up when the PNDP held public consultations in the area. With funds from AFD and the European Union, “cassava drying zones” were created. Large platforms, made of cement are easier to clean and reduce drying time. Once ready, the cement slabs are installed - away from the road for safer access.

“I don’t have to run around anymore,” says Sonya. “The drying area is right across from my house.”
But to meet demand, many more are needed.

© Rodrigue Mbock / AFD
“Mama President”
In the outskirts of Bertoua, not far from the border with the Central African Republic, women have stopped using tarpaulins to dry cassava here, too. “Mama President” of the association of farmers, Rosette Nya Loga, says the new drying platforms have changed the way they work, and have greatly reduced health and safety risks when working by the roadside.

“We used to harvest cassava, dry it, and sell the surplus in the form of cassava rolls and mintumbas (traditional cakes),” says Rosa Nya Loga. “Thanks to the new ‘cassava-drying stone’, the drying process is much faster.”

But they still lack other equipment, such as containers for soaking cassava, which means Nya Loga and her partners cannot yet sell to their full potential.
What’s more, the drying areas are only used by part of the village. Farmers located far from the site continue to use plastic tarpaulins.

© Rodrigue Mbock / AFD
Saving Lives with Well Water
As he paces the grounds of Gouekong public school, it’s obvious Charles Onana feels at home. The 40-something native of Gouekong studied in these classrooms as a child, and is now chair of the school’s parent-teacher association. “The school was founded in 1984. It was originally built with temporary materials,” says Onana. “Then, little by little, thanks to support from partners and donors, we were able to build with durable materials and expand.”

Now, there’s a well in the school, which has put an end to the journey undertaken by children for decades, to the only source of water around: a spring in the middle of a forest 1.5 kilometers away.

It was an increasingly dangerous walk.

“As children we all had the task of fetching water. It was difficult, but I think we got so used to it that we didn’t complain. But then they paved the road, there was heavier traffic, and accidents occurred,” the former pupil recalls.

Forced to cross the main road separating the school from the spring, several children were hit by cars. Serious accidents left the village in shock. When the PNDP and the municipality consulted with the local population on micro-project options, locals prioritized drilling a well inside the school.

The well is now operational and open to residents, who can draw water for free – provided they periodically contribute to a fund handled by a management committee in charge of maintenance. 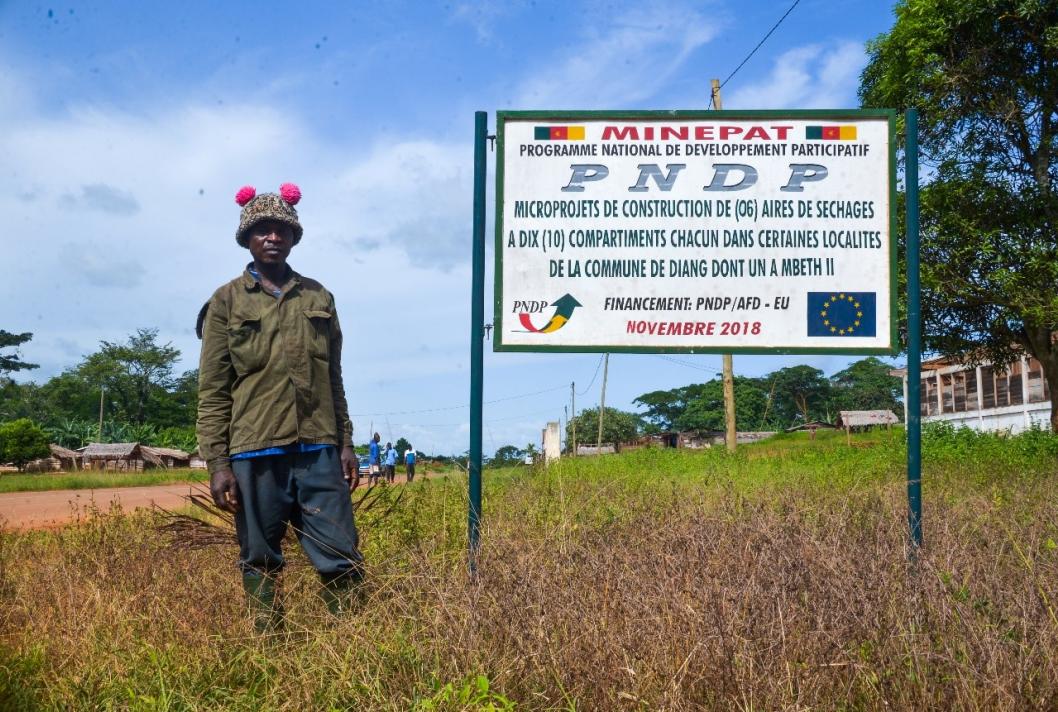 The National Community-Driven Development Program (PNDP) supervises the implementation of rural development projects financed by the European Union and AFD. Despite fears that such an ambitious program, deployed across Cameroon’s 360 municipalities, was too ambitious and spread out, it has benefited from public input.

The program is decentralized, with a participatory system that places the community at the heart of its actions. In this way, rural development is grounded in the empowerment of municipalities and villages, where locals become actors in their own development. This approach aims to break with top-down development projects that are planned far from the site and then imposed on communities with little or no consultation with the people affected.

The PNDP’s participatory approach seeks to marry popular input with financial assistance from major donors, such as the World Bank, which provides the majority of its funding. The PNDP also benefits from technical and financial support from AFD through the C2D initiative (Debt Reduction-Development Contracts), as well as the European Union’s Emergency Trust Fund for Africa and the European Development Fund.

Whether it’s schools, bridges, access to water, pasture or farming facilities, villages and municipalities play an important role in the assessments of community needs.

“The PNDP uses a didactic approach, which both seeks to build and empower the people affected,” says technical coordinator Frédéric Bandon.

“It’s a process that encompasses all stages of development, from the building and completion of a project, to its ongoing maintenance.”

The European Union Emergency Trust Fund for Africa for instance, supports investment projects promoting the employment of young people in the northern regions, using something called High Labor Intensive (HLI). Mobilizing local labor forces for construction sites on a large scale, the program provides training activities to young people. In some cases, a portion of the salary is deposited in a savings account at a micro-finance institution, thus allowing trainees to start saving.

Lacking prior professional training, Angeline Mebouskua worked at the construction site of the artificial pond and borehole at Ndoukoula in the far north of the country.

Earning about 3,000 CFA (€4.57) a day, the 28-year-old housewife and mother of five managed to save 80,000 francs (€122), which she has invested in a new sewing machine. Now that the construction project is complete and her contract has come to an end, Mebouskua has begun training to start her own business.

“The money I’ve earned allows me to provide for my children’s health, education and clothing,” says Mebouskua. “I am saving more money to build a small workshop and then purchase a second sewing machine.”