© Didier Gentilhomme / AFD
Sport and Development
Three Oceans Africa
Development
sport comes into play
Thanks to the values which it conveys - participation, respect, tolerance - sport brings in its wake education, health, gender equality and employment. Sport is increasingly asserting itself as a valuable cross-cutting tool to confront the major challenges of education and social cohesion in developing countries.

It is much more than a luxury or a form of entertainment. Sport - whether as a game, as physical activity, or as competition - plays a major role in all societies. It is vital for children’s stability. It provides the ideal framework for developing health and self-confidence; it teaches tolerance, participation, co-operation and respect, both for other people and for established rules. But it also teaches the value of effort and the way to manage winning or losing. All these are building blocks for social relationships.

‘The social role of sport has obviously not just been discovered, explains Jérémie Pellet, Deputy Chief Executive Officer of the Agence française de développement (AFD, the organisation responsible for implementing French development policy). Coubertin had already identified it as a means rather than an end… But it remains the case that the innovative use of sport encourages social inclusion and helps to solve social or educational problems. There is still great potential for this in many countries! So we are doing our best to press forward in this direction.‘

Building sports grounds or swimming pools in deprived areas, supporting training centres and also educational projects for children... The areas for intervention by development stakeholders are legion. ‘Sport is a tool, says David Blough, from the NGO Play International, which enables us to take action after crises, as well as promoting social development in more normal times. Sport provides a gateway to approach questions in a different way: it is a conduit for engaging the communities which we wish to support.’ 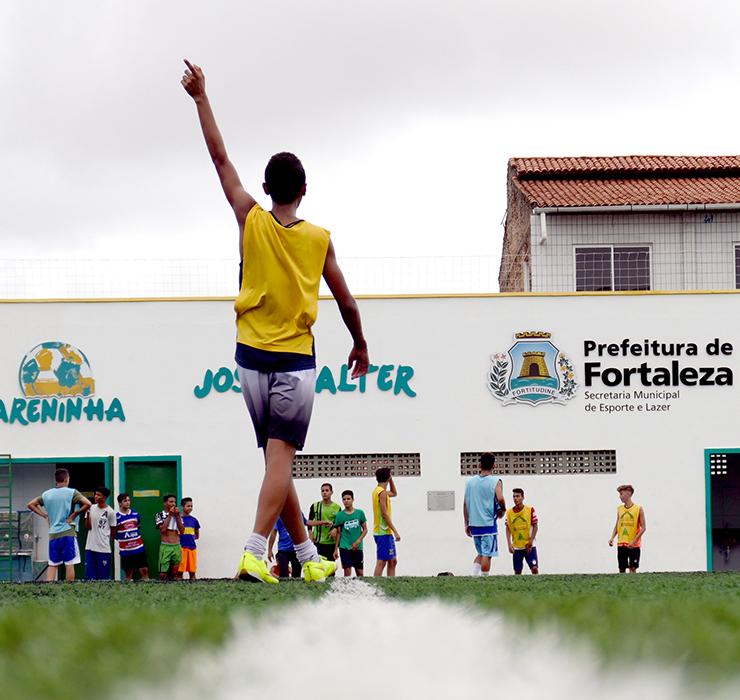 © Olivia Lamberti / AFD
For Burundi's children, schooling comes through sport
School can hardly be considered a fact of life for a Burundian girl or boy. Almost half the country’s population is aged under 15: schooling is free, but many types of discrimination exist, leading to many children dropping out and failing educationally. The country is still suffering the legacy of twelve years of civil war (1993 - 2005).

Against this background, the NGO Play International has been offering since 2016, with AFD’s support, a programme to give children access to, and keep up their engagement in, school, thanks to an original method, ‘Playdagogy’. This is a participatory method which uses sports games to raise children’s awareness of the importance of school, but also to dismantle stereotypes around poverty, gender, or disability. Wakati, one of the programme’s facilitators explains: ‘for me, Playdagogy is about bringing children together around a game to raise their awareness of the importance of schooling and of peaceful co-existence’.

This method has already proved its worth in more than 30 schools and youth centres in Burundi and has had an impact on over 10,000 children. The NGO is also engaged in Haiti, India and Kosovo and will soon deploy in Mayotte, also with the financial support of AFD.

AFD and NBA playing on the same pitch
When social bonds are lacking, it is an understatement to say that team sports have a role to play. To extend this role, a partnership agreement between AFD and the National Basketball Association will be signed this Wednesday, 4 July in Lagos in Nigeria. Riding on its success worldwide, the NBA has formed a special bond with Africa, wherefrom many of the players in the league originate. For its part, AFD is offering financial instruments, loans and subsidies, drawing on its extensive experience of structuring and supporting high-impact socio-economic projects on the African continent.

What is involved? Building sporting infrastructure and implementing educational programmes which have a bearing on health, citizenship, gender equality or entrepreneurship in Morocco, South Africa, Ivory Coast, Senegal, Nigeria... For a start.

The two organisations also plan to support former NBA basketball players, many of whom are setting up their own training centres in their countries of origin. What is at stake here? Ensure that these structures have a snowball effect and a lasting benefit for all.

© Alain Goulard / AFD
Ronny Turiaf: ‘They can do it too’
During a recent meeting organised by AFD in July 2017, the French champion and former NBA star Ronny Turiaf acknowledged what sport had done for him: ‘I didn’t really have a roof over my head; I started playing basketball much too late by normal standards to make a career out of it; I was a skinny kid... When I tell that to young kids in Ivory Coast, in South Africa or in Congo, they realise that we are all the same, and that they can do it too. All you need is someone to tell you that anything is possible. Sport encourages that relationship and that message! It also teaches young people strong values, both on and off the pitch’.

The former basketball player Emmeline Ndongue, a European champion while playing for France, and now Education Ambassador for Paris 2024, understands the contribution of sport: ‘It taught me friendship, powerful emotions, respect for the rules, and how to push my limits further. But also a readiness to work hard to succeed’.
Boosting an emerging sector of economy

The sports economy accounts for almost 2% of global GDP and this figure continues to grow. Hence, for many countries this provides a genuine opportunity in terms of local development and for employment. To help turn these opportunities into reality, France launched a programme of transformation through sport when Liberian President and ex-footballer George Weah was received at the Élysée palace in February 2018. The aims are to create more international partnerships and to support local initiatives encouraging neighbourhood sport and social cohesion.

This is a small-scale cultural revolution: sport moves into the limelight and will henceforth be a key element of France’s foreign policy. ‘Our aim is to strengthen the ties between the world of sport, companies, development stakeholders and organisations to bring forward more development projects’, explains AFD’s Jérémie Pellet. AFD group will play its role of catalyst and facilitator at the heart of this new initiative. It involves using sport to help achieve the UNDP’s Sustainable Development Goals (SDGs), encouraging local economic sectors through engaging the private sector. Preparations for the 2024 Olympic Games in Paris, whose main theme is that of ‘Sustainable Games’, will obviously accelerate this momentum.