JUMO: Banking services in the palm of your hand

© Chiara Frisone / AFD
Digital and Innovation
|
Social and Inclusive Business
Zambia
JUMO
Banking services
in the palm of your hand
USD 3
million of equity investments
6
countries where JUMO is active (Tanzania, Kenya, Uganda, Zambia, Ghana, Pakistan)
12.2
million loans allocated in 2017
Thanks to the emergence of the financial technologies sector – fintech – and mobile phones in Africa, these devices have become real service delivery platforms. One example is JUMO, a start-up which opens access to credit and savings in real time via smartphones.

In Africa, 80% of people living on the continent are connected to a mobile phone network, but only 20% have a bank account. At the same time, the explosive growth of fintechs in emerging economies allows millions of people to overcome daily difficulties related to access to electricity, healthcare, education or to obtain venture capital or cash. Another even more important aspect is that fintechs provide an affordable range of financial services and practical uses for people who benefit little or not at all from banking services. They therefore pave the way for universal financial inclusion.

In this context, AFD Group considers fintechs as key partners in its efforts to reduce extreme poverty and promote shared prosperity in developing countries. In April 2018, PROPARCO, AFD’s private sector financing arm, made a USD 3m equity investment in JUMO, a start-up providing access to credit and savings in real time via a simple mobile phone. The company’s services are available in Tanzania, Kenya, Uganda, Zambia, Ghana and Pakistan. 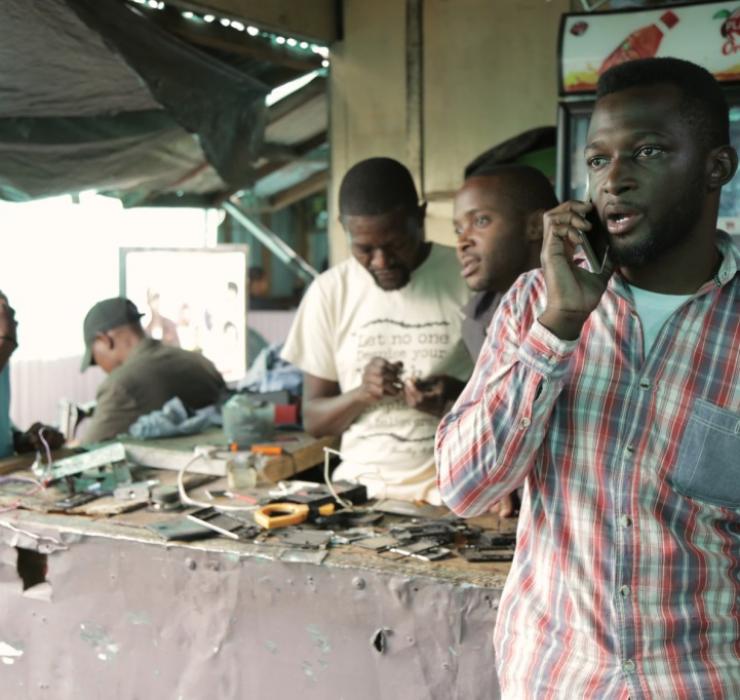 © Chiara Frisone / AFD
Women’s empowerment in business
In Zambia, JUMO has forged a strong partnership with Airtel, one of the country’s leading mobile network operators, to provide short-term loans paid directly via the customer’s Airtel Money account. The loans are simple and easy to obtain, as no savings or paperwork are needed. Customers can borrow small amounts, ranging between ZMW 26 (EUR 2) and ZMW 1,000 (EUR 85), provided they repay their loans within the allotted time. The majority of JUMO’s customers only earn very low incomes (for example, 80% of its customers in Tanzania live on less than 4 dollars a day) and have never had access to financial products before (77% of its Zambia customers have never taken out a formal loan before). What is even more interesting is the fact that three-quarters of JUMO’s users, all countries taken together, are small or micro-entrepreneurs.

This is the case of Denia Tembo, 23, who owns a shop selling women’s clothes and children’s shoes in the suburbs of Lusaka, in Chipata Compound. Less than a year ago, she was unemployed and did not know what to do with her life: “I didn’t have any money to pay for transport or buy anything for myself or my family”.

When Denia heard about JUMO and Airtel loans, she jumped at the opportunity to borrow money to start a small business. “With my first loan of ZMW 20 (EUR 1.7), I bought men’s socks and sold them. I made a small profit, repaid the loan and borrowed a bit more money to buy more items to sell”, explains Denia.

She slowly developed her stock and found premises to set up her shop in Chipata Compound. Her latest loan has helped her buy more stock for her shop and provisions for herself and her family. “Out of a total of ZMW 735 (EUR 62), I used ZMW 460 (EUR 39) to buy children’s shoes for my shop and ZMW 275 (EUR 23) to buy in bulk to pay less. I live with my sister, who’s unemployed, and her five children, so I have to support my family”.

© Chiara Frisone / AFD
Not having a guarantee is no longer a problem
According to the World Bank, mobile money promotes financial inclusion in Sub-Saharan Africa. While the share of adults with a bank account remained stable between 2014 and 2016, the share of people with a mobile money payment account almost doubled, from 12% to 21%.

As less than 1 one person in 10 has a credit history in developing countries and small businesses are often refused loans by traditional financial institutions, fintechs help these people access solutions tailored to their needs.

In the case of Richard Simutenu, a small unsecured loan helped him boost his business. He first borrowed ZMW 26 (EUR 2) through JUMO’s platform to buy everyday items for his hardware shop located in Lusaka’s bustling central market. He gradually increased the amount of his loan to ZMW 440 (EUR 37). “Thanks to the latest loan, I bought hardware items the most in demand, and this has really helped me boost my business”, says Richard.

He has never tried to apply for a loan through a bank or a recognized financial services provider, because they are known to turn down clients with no collateral. “It’s very difficult to get a loan for people like me who don’t have something to show”, confirms Richard. “For example, they ask you to provide property deeds, but if you’re renting, there’s no deeds to show! But with the Artiel loans, I only need to repay the loan on time, so that I can increase the amount I borrow and always have access to money, anywhere, anytime”.

Richard plans to borrow more money to increase his stock, especially with plumbing and building articles, which are very much in demand from clients. The shop of his dreams is much bigger than his current 2 m2 shop. “I would like to buy a big shop with an annexed warehouse where I would store all my stock, and my customers would be able to get all the items they need from me,” Richard is proud to say.

© Chiara Frisone / AFD
The “mobile money” market
Benny Musonda has been in the construction business pretty much all his life. Born into a family of builders, he learnt the ins and outs of the trade from his father and uncles. However, he waited until his early 30s to start his own business. “When I was 25, people used to say I was too young to earn a lot of money, and I continued to work for my uncle. But now that I’m 32, I’m old enough to take on big projects! This is the 50th site I’ve done on my own!”, he says proudly.

Like many self-employed people in Zambia, where secure jobs are scarce and people often have several petty trades at the same time, Benny has his own side business buying and reselling mobile phones.

Unlike many smaller entrepreneurs, Benny has a bank account on which he has been saving since he was 18. However, his bank refused to give him a loan because he could not produce payslips: “I was desperate because despite my ambition, the doors remained closed”.

Benny only found out about Airtel’s loans recently. He also started with a very small loan of ZMW 20 (EUR 1.7), before increasing the amounts to ZMW 1,000 (EUR 85) for his latest loan, used to buy three mobile phones which he sold with a huge 80% profit.

As he is always on the road, getting to and from his clients and his building sites, it is essential for him to have access to “mobile money” in case of emergency. “One day I forgot my wallet at home, but I managed to get a loan for ZMW 100 (8.5 euros) to pay for a transport service. When I’m on the road, I know that I can always get a loan to resolve the situation if I have my phone with me”. 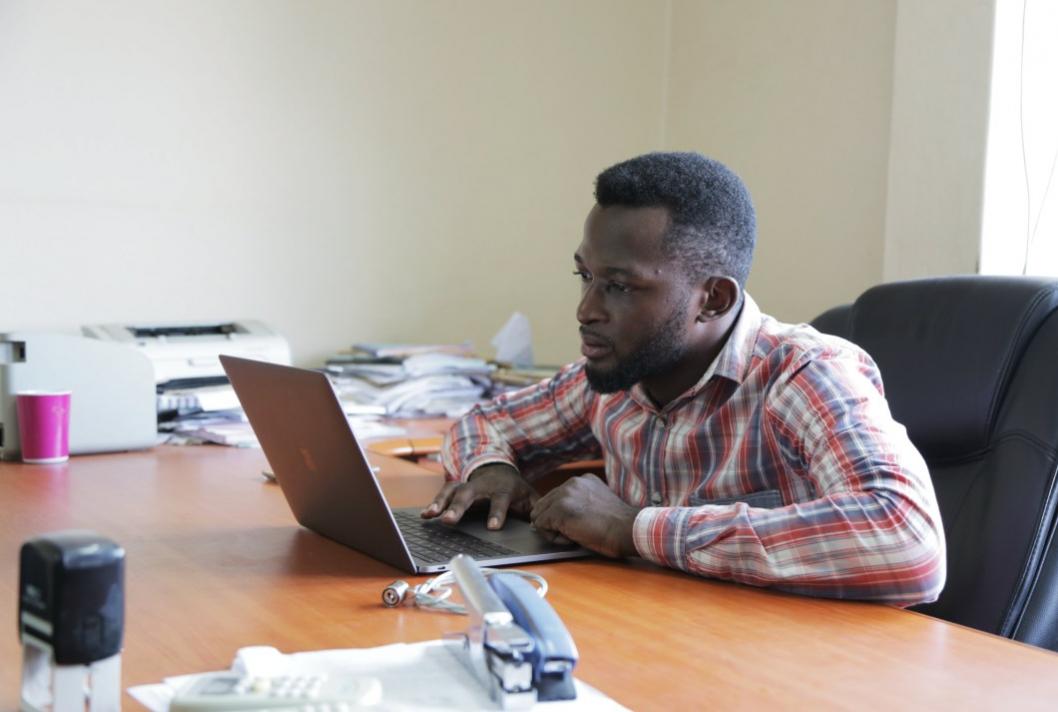 At the end of 2017, there were over 300 fintech start-ups in Africa. This sector has seen investments rise from USD 12.2bn in 2014 to USD 19bn worldwide in 2016. The increase in the number of development finance institutions joining the pool of investors in fintechs with a social impact reflects this growth and investor confidence.

“PROPARCO’s investment in JUMO – which is also our first investment in a fintech company – is a natural extension of our work to promote financial inclusion via microfinance institutions, loans to small and medium-sized enterprises – and now mobile technology”, explains Grégory Clemente, Chief Executive Officer of PROPARCO. “This project uses mobile phone technology to reach a larger number of people in a much wider area.”

JUMO was set up by Andrew Watkins-Ball in 2014 in South Africa. It has grown from a team of 7 people to some 300 people in 2018, selling its products in six countries. In 2017 alone, JUMO granted 12.2 million loans to its customers all over the world.

“JUMO has started to solve the problem of access to good quality financial services for people in emerging economies”, says Andrew Watkins-Bell, CEO of JUMO. “It’s unacceptable for people to have difficulties making transactions, saving or finding capital to finance their company.”

Despite the steady growth of investment in start-ups worldwide, only USD 560m were invested in these companies in Africa in 2017, against USD 2bn and USD 60bn in their counterparts in Latin America and Asia. Access to financing remains an obstacle for African start-ups, as shown by a recent study, which says that less than 4% of them have access to it.

In this context, PROPARCO is a major catalyzer of private investment in African start-ups, either directly, or through the Investment and Support Fund for Businesses in Africa (FISEA). This fund  makes equity investments in businesses, banks, microfinance institutions and investment funds operating in Sub-Saharan Africa.

Since 2015, PROPARCO has supported four venture capital funds for an amount of some USD 20m. In addition, PROPARCO has directly invested in four start-ups – including JUMO – which use technology to lower the cost of access to goods and services for local populations.

Finally, our subsidiary has set up a service dedicated to equity financing for innovative African start-ups. The aim is to identify and finance the best venture capital funds and the best start-ups which share the same development objectives as PROPARCO, with a particular focus on the fintech, energy, education and health sectors.