Kenya: wind, dust and a school

© Lambert Coleman / AFD
Education and Training
Kenya
Wind, dust
and a school
5
schools fully constructed
2,500
pupils will benefit from the new facilities
50
modern classrooms built
On the shores of Lake Victoria, Kenya, the Primary schools of Kisumu city are being reborn from their ashes. This rebirth is thrilling the teachers and bringing hope to the pupils.

At 6.30am on a January morning, blue uniforms are lined up on the dusty roads to Angira Primary Public School, located in a Kisumu suburb, 350 kilometers from Nairobi. Aged between 3 and 16, the pupils walk beside a brand new school, resplendent with colour.

In 2012, AFD started financing an integrated urban development project for the City of Kisumu, the third biggest town of the country, with 600,000 residents. One component of the project consists in constructing new facilities for 5 public primary schools, majority of which are located in the suburbs, and were in a dilapidated state.

Angira Primary School is one of them. Today, everyone in the school is eager to benefit from the spacious and modern school. But the pupils will have to be patient: the construction works are about to be complete. In the meantime, they carry on towards their current classrooms, which are small and dark in comparison. 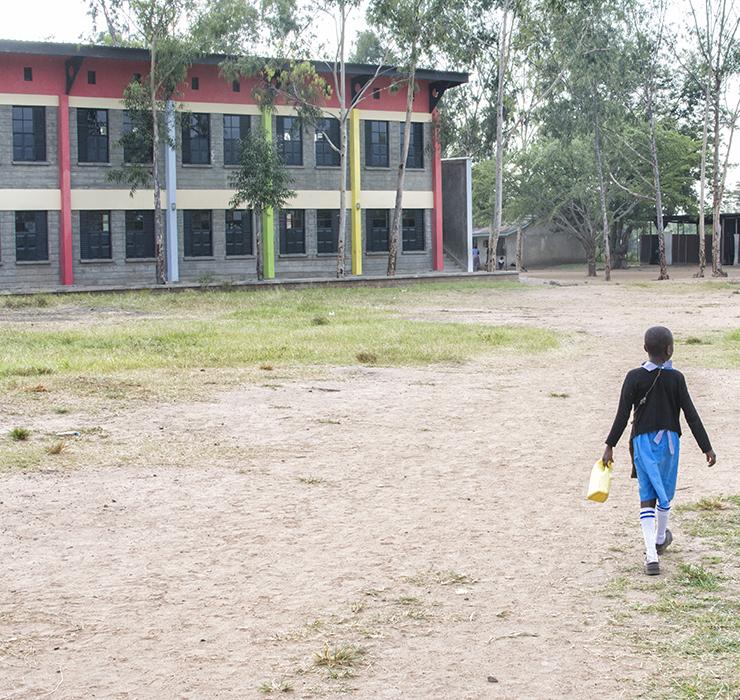 © Lambert Coleman / AFD
Mical, from dilapidation to renewal
According to Mical Akech, Angira Primary’s Headteacher, the state of the facilities in her school no longer met the needs of her pupils or teachers. “The school was built in 1947 by the Catholic Church. It started with mud houses, but they were pulled down. Despite this, the school was very old. It had cracked walls. One day, three classrooms fell down over the night. When we reported to school in the morning, the buildings were no more. Some pupils had to have the lessons outside, but there was a lot of disturbance from people working in and out of the compound. It was windy, it was dusty and very hot. As a result of that, we decided to make a makeshift structure.”

The harsh conditions are now over: “When the project owners were going around to select the schools, they realised Angira was very needy.” Since the renovation works have started, the pupils who had left her school have begun to come back: "The school has actually swollen from a population of 285 pupils in 2013 up to 600 today. We know that, when we will go in the new building, the population will even go higher.”

In her opinion, the presence of a decent school is responding to a genuine need in the area: “The pupils are coming to this school, one, because they are attracted by the beautiful building. Two, there is a big market around which has a big population. Most of the pupils come from there. Now they don’t have to go to a longer distance because of the better infrastructures in the other schools.”

© Lambert Coleman / AFD
Vanessa: “I want to get my own locker”
Vanessa is 12 and in class 7. She lives with her grand-parents, her mother and little brother. She was in Angira since nursery school.

A hard-working girl, she first wished to become a teacher. She now dreams of becoming a doctor. As every other pupil, Vanessa is impatient to move into the new buildings and to get a better learning environment. To her, the main problem in the old school is the lack of space: “Here, we are sitting on desks. Sometimes we are sitting at 4 or 5 people and that can make you not concentrate on the studies. Some people might be talking, laughing. What the teacher is saying in front, you will not even understand. In the new school, I expect to get my own locker, so that I can be seated by myself, and study harder than when we are all seated together.”

Ambitious, she wants to reach 400 marks and above out of 500 in her KCPE (Kenyan Certificate of Primary Education), so as to access a good secondary school. Her mother, Marygoretti, is confident. She has no doubt that the new buildings will help her daughter to benefit from a better education.

© Lambert Coleman / AFD
Ham, the beautiful things, the morale and the motivation
Ham is the Deputy head-teacher at Angira Primary school. Besides teaching Mathematics and social sciences, he is involved in the everyday management of the school. Ham joined the teaching team of the school in 2014, when the construction was still at a planning stage.

When he arrived, the buildings were in a dilapidated state and the KCPE results (Kenya Certificate of Primary Education) were constantly dropping. Today, hope has come back: "The children are coming to a better school. It‘s even improving their morale. You know when you are associating yourself with good things, your morale is boosted and then you get motivated. You even work harder. You can’t associate lower performance with a good school.”

There has already been a substantial improvement in the final exams results. According to the Deputy Headteacher, this will have a beneficial effect on the area: “One: it is the performance which is bringing them back. When we have many pupils, we are better because we are teaching a bigger part of the population of this area, and this is going to improve its economy.

The virtuous cycle doesn’t stop there : “Two: when you come to a new school, you have to dress smart. You have to behave well, in Ham’s opinion. That is it, you have to come out a better person. This school is going to bring a very big change in this community.” 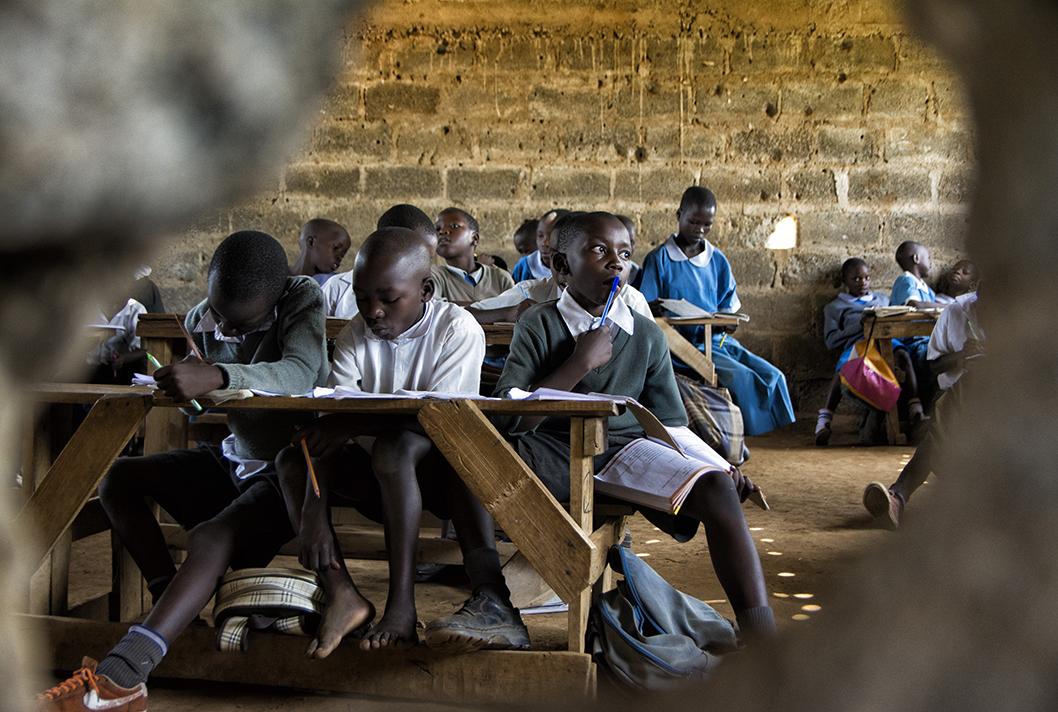 In Kenya, the pupil to teacher ratio is 45:1. In Angira, this ratio has been largely exceeded and it is not uncommon for a pupil to share a class with 90 other pupils.

The new facility will double the number of available classrooms and will provide a desk for each pupil. This should have a direct impact on improving the comfort and concentration of the children.

The doubling of the classrooms will call for more teachers. The school’s Headteacher is ready to request additional teachers from the Teachers Service Commission, the entity in charge of recruiting teachers in the public sector.

In the old facility, teachers and pupils had to share a small number of latrines, in a really bad state.

The new structure includes a sanitary block, with separate toilets for boys and girls, for the younger and older ones, and outside sinks.

The new facility also respects several norms: the toilets are accessible to people with disabilities.

Kenya : new schools, new hopes
In #Kenya, Primary schools of #Kisumu city are being reborn from their ashes. This rebirth is thrilling the teachers and bringing hope to the pupils!