In Southern Mayotte, at the end of a winding road and a stone’s throw from the sea, the first social homeownership apartment building has been built in the territory of Mangua Bé. This pioneering high-rise building in the 101st French Department, where residents in Mayotte are used to being owners of detached ground floor houses, is home to low-income families or elderly and unemployed people who have benefited from loans to buy an apartment thanks to an AFD guarantee.

This project has been designed by the Municipality of Chirongui which, with AFD’s support, has developed plots of land. It is located in Poroani village and has required considerable mediation with the population to ensure that it takes ownership of these spaces which are different from their usual way of life.

But the residents of Mangua Bé, who mainly used to live in completely unregulated corrugated iron huts with no modern equipment, have very quickly taken ownership of the space. The residence combines modernity and tradition. People live as a community, with their doors and windows open. Families help each other, go from home to home, chat inside where it is cool, or share a mat by the pathway so that they can watch over the children playing. 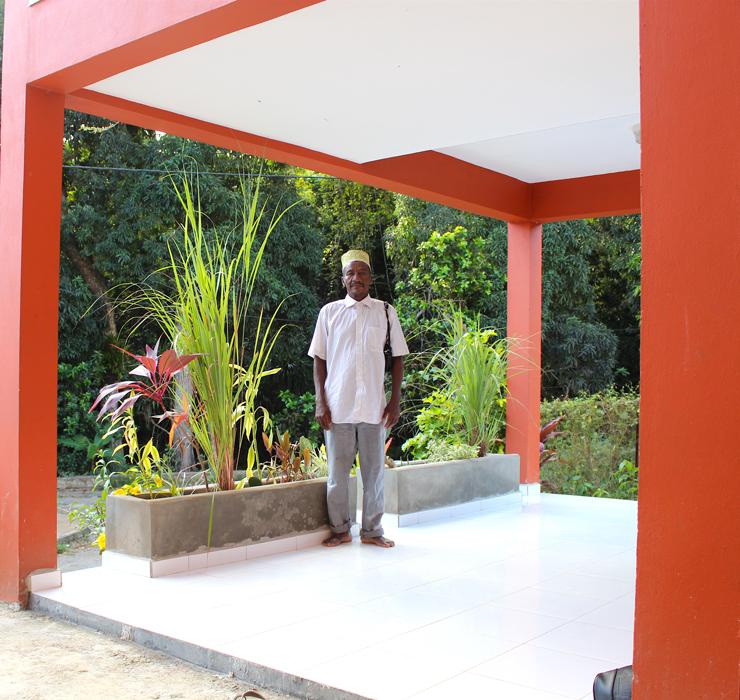 © Ornella Lamberti / AFD
Zalihata, a sheltered old age
On the ground floor, the door of the apartment of Zalihata Ali and her husband is always open to anyone who wants to have a cold drink during one of these hot days in Mayotte. This elegant lady in her sixties, with a beaming smile, is proud to show her neat and tidy home. She and her husband used to live in a “banga” – a corrugated iron hut – near the sea, where they raised their children. This grandmother is really happy to have swapped it for a modern apartment in the Mangua Bé apartment building. She explains that she was able to benefit from housing thanks to a survey conducted by the Municipality of Chirongui to identify families with the most urgent needs.

By being identified, Zalihata was able to benefit from the Mayotte Guarantee Fund (FGM), managed by AFD. This guarantee applies to loans allocated to private individuals in the context of access to social or first-level social housing. In Chirongui, the municipality where Zalihata lives, some sixty households have been assisted thanks to FGM since 2014, including nine of the eleven families which live in the Mangua Bé residence – as two apartments are still vacant.

Between 2011 and 2017, over 220 applications benefited from this guarantee in Mayotte, for a total gross amount of over EUR 5.5m of guarantees. Since 2014 and the gradual increase in social welfare benefits – as Mayotte is not yet aligned with the common law Social Security Code –, the number of beneficiaries has been constantly rising, with some 170 applications dealt with between 2014 and 2017.

© Ornella Lamberti / AFD
Boina Hamada, from the “banga” to a terraced garden
Visitors are received at the entrance to Boina Hamada Nakibou’s apartment through a small piece of land on this terrace on the first floor, where lemongrass and porovi – a local plant with medicinal virtues – are grown. This surprising micro-garden, where residents can help themselves, is grown by Boina Hamada Nakibou, an unemployed man in his forties, who has owned an apartment in Mangua Bé for a year.

“I’m really happy”, he tells us, as he shows us round the three rooms of his apartment where he lives with his wife and four children. This is real luxury for this family which used to live in a 2-room “banga” with an outside toilet.

Boina Hamada Nakibou heard about the Mangua Bé project during a public meeting and was able to meet the city’s Deputy Mayor. Thanks to the Mayotte Guarantee Fund and the housing allowances from the Family Allowance Fund, this father was able to become the owner of his pretty 4-room apartment. An apartment he shares part of – this garden which delights his neighbors.

Mangua Bé is surrounded by green spaces and has 2 m² private gardens. It has been designed based on the well-being of its occupants. The property developer, Jolland Khaldi, Director of the Cost Price Social Housing Company (HSPC), explained that he wanted to preserve the comfort and privacy of residents, while “creating density”. His gamble has paid off, as 13 families can be housed in 800 m2 – an advantageous use of land in this territory where there is strong demographic pressure and land is valuable.

© Ornella Lamberti / AFD
Madi: solidarity and work
The story of Madi Saidina’s move to Mangua Bé is a story of work and solidarity. Madi’s wife found that her house was “too small” for her couple and their four children. She made an application at Chirongui City Hall and took out a loan to buy a property in the Poroani residence.

As the city gives priority to hiring – through Single Inclusion Contracts (CUI) – its constituents who are in need and have loans to repay, Madi Saidina’s family was able to find a job. The remainder of the loan is financed by a “chicoa”, Mayotte’s version of “tontines”, these collective savings associations which gather savers together to get them to invest in property together. “We didn’t think we would be entitled to such a spacious area”, Madi Saidina is pleased to say. “We live in a community, we don’t need to worry about our children, we feel good here”, he says enthusiastically.

As with the other social housing on the island, the apartments in Mangua Bé are not all handed over as turn-key projects, because the residents take part in their finishing works. “We did the tiling here”, Madi Saidina is proud to show. Mangua Bé is indeed really all about collective work. There is no shortage of other projects for housing and to improve living conditions in this municipality, with AFD’s support. For example, the sustainable development project for the “Chirongui Stadium” allotment aims to create major road connections, develop soft modes of transport and promote the quality of social life and activities in the neighborhood. 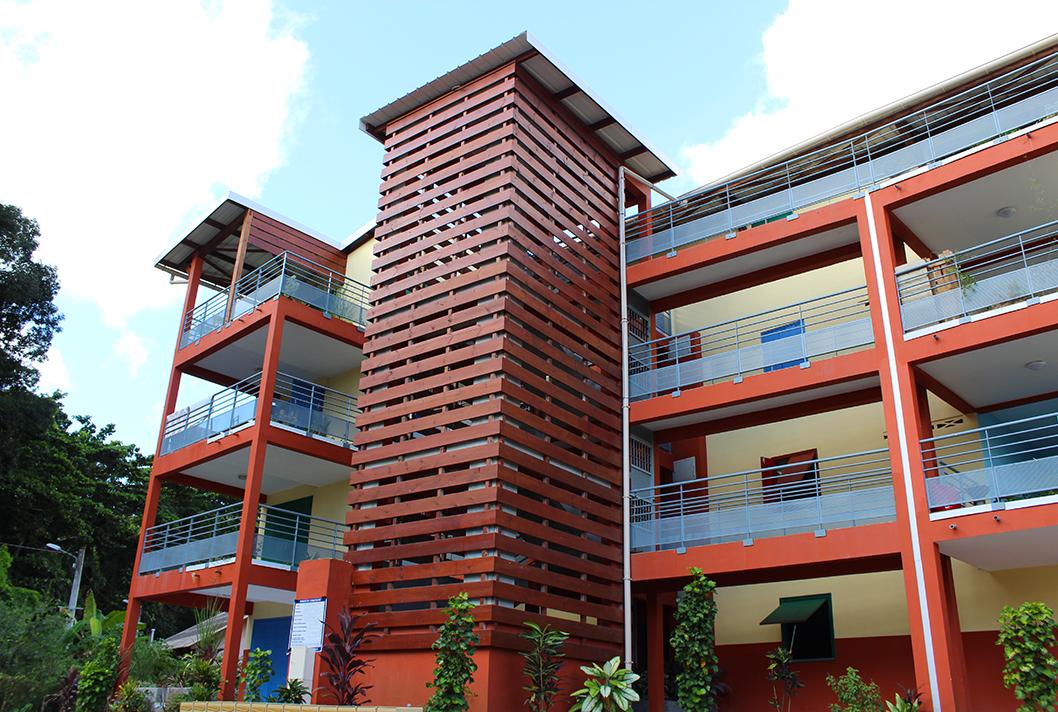 In May 2018, in response to a major social movement which paralyzed the island for several months, the Minister for Overseas France presented a EUR 1.3bn catch-up plan called “The State’s Action for your Daily Lives”, comprising 53 measures, including 5 for housing. The first of these measures establishes the creation of an Operation of National Interest (OIN) “in order to accelerate housing production and organize the structuring of business areas in an optimal manner”, with increased means for the Public Land and Development Establishment. The second commitment increases the number of social housing units to be built in 2018 to 400. This objective is supported by a 50% increase in housing policy loans.

The third measure: support for two municipalities and an inter-municipality in the context of projects to revitalize their city centers. The fourth measure concerns financial support from the National Urban Renewal Agency (ANRU) for operations to modernize neighborhoods in the administrative capitals of Dzaoudzi, Nord and Petite-Terre. Finally, the fifth point provides for greater policing powers for the Prefect in order to fight against illegal and substandard housing.

In Mayotte, 37% of residents live in corrugated iron huts

“Housing in Mayotte is marked by precariousness”, warns INSEE in the preamble to its study on housing in Mayotte, based on the latest available data from 2013. Indeed, the results of the institute’s major survey show that the housing conditions of residents in France’s 101st Department “are very far from national standards”.

In 2013, 37% of the some 50,000 main residences in Mayotte were detached corrugated huts. Another dramatic figure: “Over six homes in ten have no basic sanitary comfort, meaning that they do not have at least one of the three following elements: water, bath or shower, toilet”. Furthermore, 28% of households did not have running water in their homes.

This situation is comparable to Réunion thirty years ago, or French Guiana twenty years ago, notes INSEE, which does, however, moderate the situation: “There has been significant progress in ten years: in 2002, 75% of households did not have running water”. In contrast, there is widespread access to electricity, with 94% of households – legally or illegally – connected. However, in 55% of cases, “the electrical installation is potentially dangerous”. Another characteristic of housing in Mayotte: the overcrowded houses. In 63% of cases, “there is a room lacking compared to the composition of the household”, notes INSEE.

For all these reasons, a third of households in Mayotte state that they are “dissatisfied” with their living conditions, considering them to be “insufficient” or “highly insufficient”. This proportion is three times higher than in Réunion and five times higher than in the provinces. These figures give legitimacy to the action of the State, local authorities and their partners for housing in Mayotte.

The new Public Land and Development Establishment of Mayotte (EPFAM) was set up in June 2017. Its aim is to conduct operations to promote land development, urban renewal and economic and agricultural development on the island. Among its partners (local authorities, public and private decision-makers), EPFAM can rely on support from AFD, which is assisting it in the definition of its land acquisition strategy.