© Chiara-Maria Frisone / AFD
Education and Training
Mozambique
In Mozambique,
students dare
to dream big
750
registered students by 2026
50%
students on bursary
US$ 25 million
invested in this project
The civil war that devastated Mozambique from 1977 to 1992 left the national education system in shambles. By the end of the war, less than half of the country's children attended primary school, and only 3.1% of them attended secondary school.

In the 2000s, the provision of free textbooks and abolition of school fees, along with investments in classroom construction and teachers, resulted in a surge in net primary and secondary school enrolments, which are now 88% (2015) and 26% (2013) respectively. However, low learning achievement and insufficient number of qualified teachers are still a cause of great concern.

In line with Mozambique’s 2012-2016 Strategic Plan for Education, which prioritises good governance, social inclusion and improved quality of education, AFD is financing the construction of a school of excellence, the Aga Khan Academy, in the outskirts of the capital city Maputo. The Academy – the third in the world after Mombasa, Kenya, and Hyderabad, India – provides high-level primary and secondary education with the goal of training future highly qualified and socially responsible professionals to help Mozambique fulfil its social and economic development ambitions. More importantly, the Academy will actively enroll highly gifted and talented students from disadvantaged backgrounds who will be exempt from paying school fees.

The Aga Khan Academy is one of the 240 learning institutions managed by the Aga Khan Development Network (AKDN), which promotes projects in the area of education, rural development, environment, architecture, economic development and civil society strengthening.

AFD has a long-standing relationship with AKDN, having already worked together on several projects. However, this is the first project between the two organisations in the education sector and the Aga Khan Academy in Maputo is the first one to have received external financing. 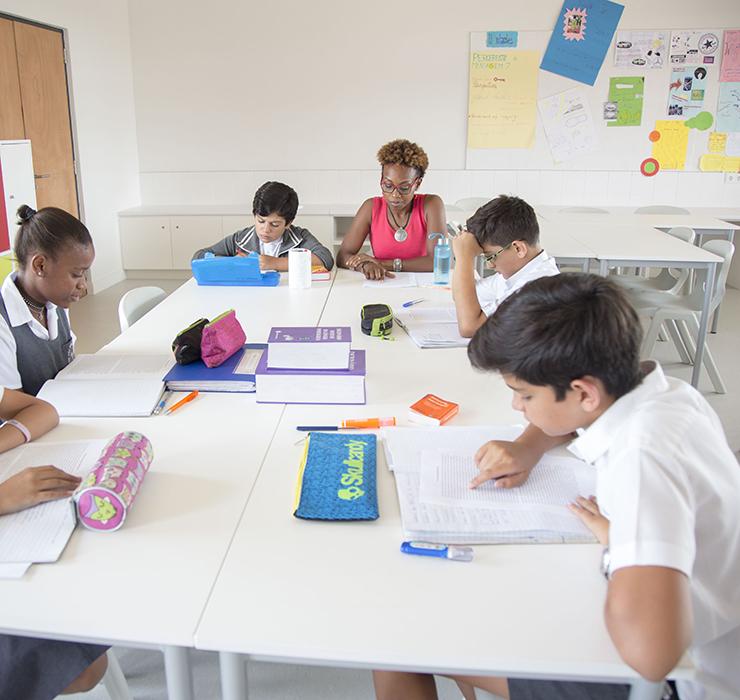 © Chiara-Maria Frisone / AFD
Motivated students, motivated teachers
Portuguese language teacher Adília Cabral cannot contain her enthusiasm when she recalls her first day at the Aga Khan Academy. “The thing that struck teachers and students the most when we entered the new building was the amount of space there was”, says Adília. “The classrooms are big and airy, we have large green gardens, lots of outdoor space for the students to play surrounded by nature”.

For Adília, coming to the Academy is a daily joy. “I come to my classroom early to prepare everything for my class and so every morning I’m excited to come to work because I’m in a space that makes me and the students happy and eager to learn”, she says.

Adília knows that bigger, organised spaces also have a positive impact on the students. “The students are much more motivated now because the quality of the learning environment is very important. The new school building allows students to learn both inside and outside the classroom, through traditional teaching and playing”, she says.

One of the children’s favourite spaces is the library, aptly situated between the classrooms, at the heart of the school. Its high ceilings, colourful walls and playful furniture offer a stimulating and joyful environment that encourages children to read. “This library is huge! It has so many books and the children cannot wait to go there. They sit in big soft bean-bags, read books and comics, tell each other stories, and at the end of the day they can take the books home”, says Adília.
Who would have thought that sitting in a library could be a fun activity for children?

© Chiara-Maria Frisone / AFD
Space to study and….to dream big
The Aga Khan Academy in Maputo has been growing ever since it opened its doors in 2013. The second phase extension was completed in early 2018 and included bigger classrooms – one for each subject – a jungle gym for children of all ages, a library, an art room and a science lab.

“We had seen architectural plans for the new building, but when we saw it in real life, it was much better than anticipated”, says math teacher Manuel Henrique.
For teachers like Manuel, having bigger classrooms makes a world of a difference. “I now have my own classroom with my own equipment and the students can store their projects and tools there. I can walk around the class to help students with their work and I can give them the support they need”, says Manuel.

The school was carefully planned to cater for students both inside and outside the classroom. Large, green gardens, a playground and a sports field allow students to play and interact with one another during breaks and feel re-energised when they go back to the classroom.

Manuel has noticed that the new physical environment has inspired its students to start making plans for the future. “When we were in the old building, the students didn’t talk much about their possible careers after school. But since we’ve moved to the new building, I often hear the students talk about their future professions or the universities they would like to attend. They feel that because they are now in a big school, they can go to this or that university. I see a big change in their attitude: they feel free to dream big”, says Manuel.

© Chiara-Maria Frisone / AFD
Lia, the environment expert and a doctor in the making
Year 7 student Lia Mamade is particularly eager to show her newly acquired knowledge of how the new school buildings were built to be energy efficient: “We did an assessment during our science class that revealed that this building saves a lot of energy. For example, the bathrooms have energy saving light bulbs that only switch on and off thanks to a sensor. We don’t have air conditioning in the classrooms, because they are ventilated naturally or through ceiling fans”, says Lia.

Students are also encouraged to do their part in protecting the environment. “We have three thrash containers: one for paper, one for plastic and one for glass. After lunch, we each put our thrash in the right container. Saving energy and recycling is important to protect our environment”, says Lia.

It is no surprise that Lia is so knowledgeable about the environment, as her dream is to become a doctor. “I’m very curious, I like to learn about everything, so studying to become a doctor means stepping out of my comfort zone and learn new things”. 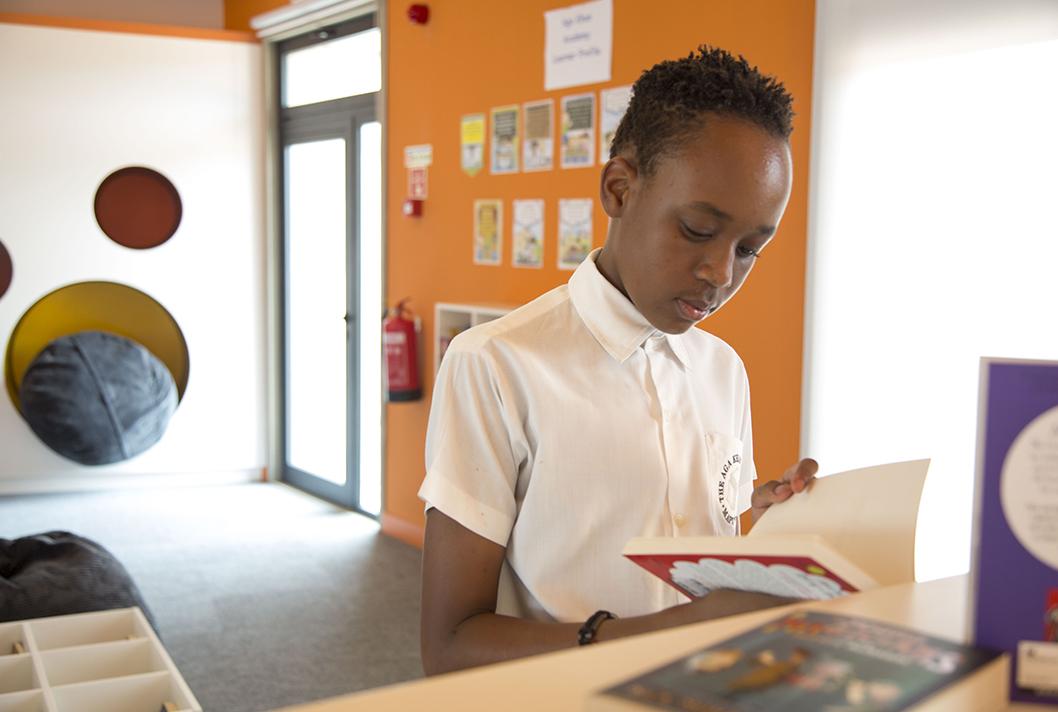 For this ‘pilot’ project, AFD loaned AKDN US$ 25 million to build a campus with a world-class teaching and learning environment. Set on 90,000 square metres of land, the Aga Khan Academy currently has 81 students– an equal number of boys and girls – across kindergarten to grade 12. It plans to accommodate 750 primary and secondary students by 2026, with 75 graduates per year.

Students as young as seven are bilingual in English and Portuguese and are able to follow classes and debate topics in both languages. Their curriculum follows the International Baccalaureate’s, which focuses on thinking critically and independently, and learning to enquire with care and logic. Students not only study traditional subjects such as languages, arts, maths and science, but also subjects such as ‘individuals and society’, which aims at developing their understanding of politics, society, culture, human experience and behaviour.

By focusing on both technical and life skills, the Aga Khan Academy aims at preparing skilled and socially responsible individuals who could one day be Mozambique’s future leaders.  In order to improve access to education for academically gifted students from poorer households, the Academy provides 50% of its students with subsidized tuition fees, while about 10% of students receive full bursaries.

…and excellence in teaching

The level of skills and knowledge among teachers is equally impressive, as local teachers are recruited through a highly competitive national exam and undergo training both in Mozambique and at the Aga Khan Academy in Mombasa, Kenya.

Portuguese language and sports teacher Adília Cabral had been teaching for 13 years before joining the Aga Khan Academy in 2018. After being recruited, she attended a year-long training in Mombasa, which completely changed her approach to teaching: “During the training, we learnt that a child’s mind is not an empty vessel on which to load our knowledge. If I instead recognize that each child already has some knowledge, I can adapt my classes accordingly, and make them much more interactive and dynamic”, says Adília.

She goes on to explain that the Aga Khan Academy stresses the importance of equipping children not only with technical skills, but also with life skills, and encourages them to question the world around them. “We not only teach them, but we also explain to them how what we teach connects to their day-to-day life and we encourage them to ask questions and share their knowledge with us and other students”, she adds.

The future is bright

By the time of its completion in 2026, Aga Khan Academy campus will include additional classrooms, a sports complex, an amphitheatre and extensive green and recreational spaces.

A portion of the land on which the development sits will be used to build 90 rental apartments, whose revenue will be used to ensure the Academy’s long term sustainability and to fund future bursaries to students from poorer households.
In addition, French language courses in partnership with the Mozambican Cultural Centre of Maputo will soon be offered to secondary students.

AFD has also initiated discussion with AKDN to fund the construction of an Academy in  Dhaka, Bangladesh. In addition, there are plans for exchanges between students of the three academies.

With highly qualified, inspiring teachers, state-of-the-art facilities, plenty of room to play and learn, it is no surprise that the Aga Khan Academy’s students dare to dream big. The Academy is without a doubt contributing to train individuals of solid principles and skills to drive Mozambique’s development forward.