© Aizar Raldes for AFD
Agriculture and Rural Development
|
Gender Equality
|
Climate
Bolivia
Organic veggies
on Bolivia’s
Altiplano
150
families have specific material and technical support
16
new greenhouses built in 2017
EUR 4.17 million
Total amount of the project
An isolated greenhouse sits in Bolivia’s arid and barren Altiplano, near the hard-scrabble village of Caluyo. Built in 2014, this modest structure – not more than a dozen meters long – has transformed the lives of the 15 families that collectively grow vegetables within its translucent, water-streaked walls. It is, perhaps, a harbinger of Altiplano’s very own green revolution.

Approaching on dirt roads from La Paz, barely 50 kilometers away, one sees Caluyo’s adobe houses rising in the desert-like landscape.  A column of piglets trot across a dirt road, and a few cows wander nearby.  Life here has its own rhythm.

A greenhouse, constructed with funds from the Agence Française de Développement (AFD), stands alone. Neat, tightly-packed rows of onions, parsley and carrots stand in stark contrast with the surrounding emptiness. Full-bodied heads of lettuce are lined up next to rows of chard.  The air is heavy with the smell of abundance.

The Altiplano lays mainly in Bolivia, but spills into southern Peru, northern Argentina and a sliver of northern Chile at its western edge.  It expansive high plains average 3,750 meters in altitude, and are surpassed in area and height only by the Roof of the World, the Tibetan Plateau. Since time immemorial, the inhabitants of this challenging land have subsisted on potatoes, the mainstay of Andean civilizations reaching back more than a thousand years.  Growing almost anything else has proven difficult at best.  The soil is poor, and the climate – at 4,000 meters above sea level – inhospitable.

Climate change has made things measurably worse in recent years. 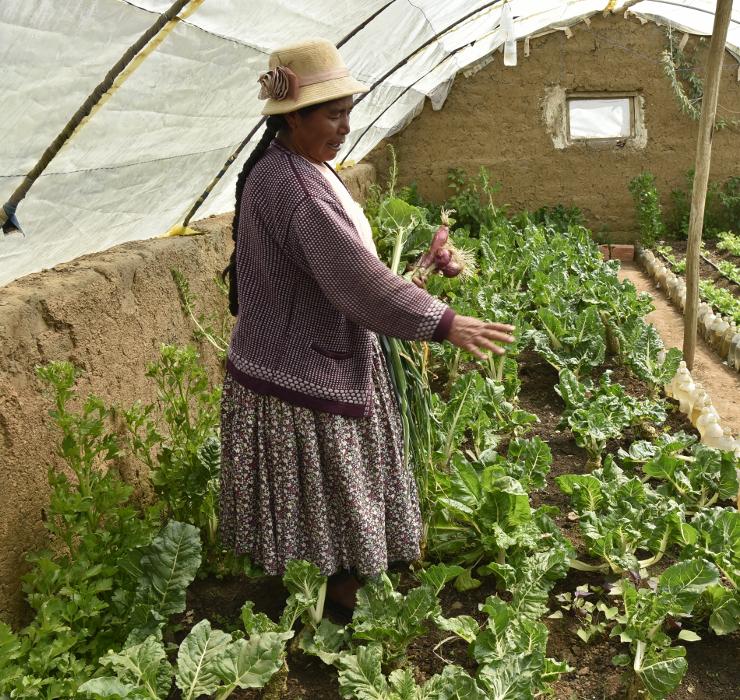 Previous Pause Next
1 of 3
MARIA TALKS ABOUT THE WEATHER
Indeed, life in Caluyo has gone from difficult to daunting, said Maria Laura Mamani, one of the greenhouse association members. “Today, we don’t know any more when it will rain or when the Sun will shine,” she said. “It starts to pour outside the rainy season, and we get sudden, intense periods of frost – this never happened before. All it takes is one frost to wipe out all the vegetables grown outside.”

About 50 years old, Maria is a “pollera”, partial to the multi-layered, colorful skirts and bowler hats typical of the region. She has never left the village, speaks the native Aymara dialect, and has always worked the earth, using the same methods as her ancestors. As global warming takes its toll, she and others are faced with a stark choice: adapt or leave. “My five children are all adults now, and four of them have moved on because life it too hard here,” she said. They opted for a “modern” life in the sprawling town of El Alto, about 40 kilometers away.

But the greenhouse has brought change. “We can plant year-round – it’s a kind of miracle. Over here we had tomatoes, and now there are carrots. And over there, we have replaced the parsley with onions,” Maria said while giving a tour. “We’re so lucky – we no longer have problems with bad weather. Can you imagine?”
JUANA ON THE EMANCIPATION OF WOMEN
The FDA – working with a local organization set up in 1970 by three Jesuit priests, the Center for Research and Promotion of Farmers (CIPCA) –also provides guidance on the best ways to rotate crops, and regularly sends experts to train farmers. CIPCA is known throughout Bolivia for its well-planned and lasting projects, especially in the areas of sustainable development and the peasant empowerment.

The Caluyo association, for example, regularly benefits from workshops conducted by Juana Quispe, a young program officer from CIPCA who advises the villagers four days per week. Recently, Juana briefed them on relevant laws, on how to apply for grants and loans from difference ministries, and on the expanding rights of women. “The members of this community really wanted to work together,” Juana said. “They were already grouped in a small association, and importantly it was composed mainly of women. For us, that’s essential – a project like this really helps them be emancipated.”

Juana’s background, she explained, helps her be effective in her work. “I bring three advantages,” she said matter-of-factly. “First, I speak Aymara.” A lot of people living on the Altiplano do not speak Spanish, she noted, which complicates their interactions with the outside world. “Second, I am from the countryside,” she added. On weekends, Juana, unmarried and 37, goes back to her own village, where she helps her family tend to livestock and cultivate potatoes. “Finally, I’m a woman.”
A NEW LIFE FOR SOFIA
Other experts come to educate the local community about a range of topics, such as what constitutes a healthy diet. “A nutritionist explained to us that lettuce is basically water and not that nourishing,” recalled 31-year-old Sofia, Maria’s daughter and one of the association’s youngest members, breaking into a broad smile. “She advised us on how to vary our diet, especially for the children, so they’ll grow up strong!”

With two kids, four and six, nutrition is in fact a major preoccupation for Sofia. But her children, Juana said reassuringly, are eating well.

Life since the greenhouse, Sofia said with a 100-watt smile framed by pigtails, is easier than it used to be. “Before, the work was really back-breaking, it was really tough. We had to put up with the wind, and dig into soil as hard as wood. The greenhouse has been a salvation.” Besides tending to the vegetables and her kids, Sofia also goes to her husband’s village from time-to-time to help out in the fields.
Sustainable agriculture, preserved water

Part of the FDA’s mission is to also spread the word about sustainable development, and how it can be applied to agriculture in the Altiplano. Exhibit A: a newly installed solar panel that powers the pump that draws the water used for the greenhouse veggies.  Not only is the energy clean, it is cheap and efficient too.  Gravity-fed drip irrigation – “gota-a-gota”, or drop-by-drop in Spanish – ensures that no water is wasted. “We use a reservoir of about 300 liters in three days,” said Maria.

From La Paz to the land

Today, for the 15 families that depend on it, the greenhouse has become the epicenter of their lives. There’s the pump to maintain and operate; weeds need to be pulled; harvesting and divvying up the vegetables; selecting and planting new crops.

There’s enough to do now that at least one young man has returned from the Big City to build a future in his home town. “I went to La Paz, to go to school,” said 27 year-old William. “But the city is very noisy and crowded. I prefer it here.  And with the greenhouse, there is plenty to do.”

In La Paz, William studies agronomy, and worked in construction. He realized very quickly, though, that urban life was not right for him.  Married to Sofia, he has quickly become one of the pillars of Caluyo.  Thanks to CIPCA, he has learned how to design the layout of vegetable gardens, and has training in animal health.

“Up to now, most of what we have produced has been for our own consumption – we don’t have to buy any more vegetables,” he explained. “Now that we have improved our yields, we have a surplus and can sell it at market. We can even make money,” he added. It is the first time that the villages of Caluyo have had enough veggies left over to sell.

Looking to the future, William and the other association members has big plans. The 15 families are eyeing a new market, in La Paz. “We are in the process of obtaining organic certification,” Juana said. “Our vegetables are organic, which is a big plus. Now we just need to expand our production.  But for that, we can count on the community members – they are really motivated.”
Neighboring communities are beginning to take notice, and the concept of sustainable development is starting to take root.  Indeed, other greenhouses may seem be popping up on the horizon.