In Togo, some 94% of school-age children are now in the classroom. This extremely good mark has to a large extent been achieved thanks to the end of enrolment fees in public education. Every year, some 120,000 additional pupils now start the sixth grade.

However, this generalized access to school poses a major challenge for the country’s secondary schools, which lack appropriate facilities, teaching materials and well-trained professional teachers.

In a resource-constrained environment, the Togolese Ministry of Education launched the Secondary School Reform Support Project (PAREC). This project is financed with a EUR 8m AFD grant and has implemented a program to improve access to school, the quality of teaching and equity between boys and girls in secondary school in two densely populated regions in Togo: the Maritime and Les Plateaux regions.

Between 2014 and 2018, PAREC has equipped 30 public secondary schools with permanent classrooms, latrines and water points. Over 4,000 teachers, inspectors and school principals have also benefited from in-service training. 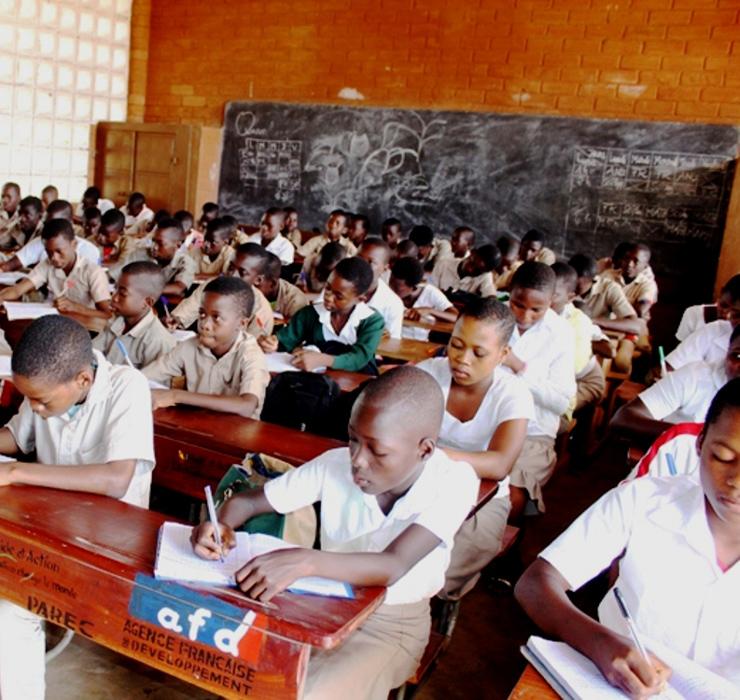 © Kokou Eklou / AFD
KOSSI, THE TEACHER TRAINED IN PERFORMANCE
Kossi Glomatsi has been teaching French for 6 years at the Gbamakopé general education secondary school. “The training I’ve received has helped me correct my shortcomings in the preparation of my sheets in French. I had a lot of difficulties”, he remembers.

A distant memory for him and for the 3,000 French and biology teachers trained nationwide. “I have a different way of seeing the job as a teacher, I discover new things and I have a better supervision of the way in which I give my lessons”, recognizes the 40 year-old.

© Kokou Eklou / AFD
ROSALINE, DETERMINED TO GET GIRLS INTO SCHOOL
Rosaline Mlatawu, who is in her sixties, is a mother of two children in the third grade, Godwin Kossi (13) and Victor (14). While every day she endeavors to give them a perfect education, she did not hesitate to follow the training given to parents by the NGO Aide et Action.

“What interested me the most is the importance given to schooling for young girls. I made a commitment to help the girls in our village go to school”, a commitment she now applies.

“I go and meet other parents to pass on to them what I learnt during my training”, she says. “I focus on certain parents who have girls who go to school. I ask them to ease household work so that they can adapt to the pace of lessons”, continues Rosaline Mlatawu, pointing out that pupils are also part of the target she wants to sensitize: “I tell girls how they need to behave to avoid early pregnancies”.

© Kokou Eklou / AFD
DANIELA, SCHOOL AT ALL COSTS
Daniela Afi Agode, 13, is enrolled in the third grade. For her, there is no question of dropping out of school. If she is determined to continue her studies to the end “It’s thanks to the sessions during community forums on schooling and retention for girls”, she states. “We [secondary school girls] have been trained in how to behave to avoid getting pregnant while we are still in school”.

These meetings are forums for exchanges between NGOs, parents and pupils, with the aim of promoting schooling for young girls, but also of warning these girls about the potential risks which can prevent them from completing their education. 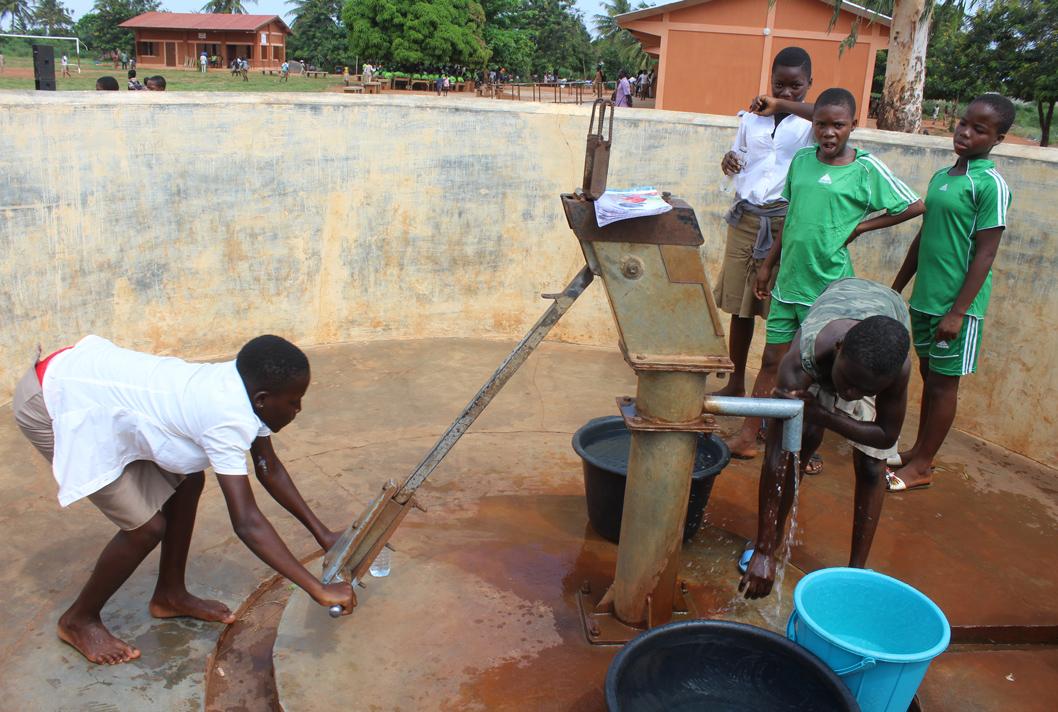 Gbamakopé is a small town in the Maritime region, located 9 km from the capital, Lomé. Four years ago, its general education secondary school was selected to benefit from the PAREC project: at the time, it was a “local initiative school”, created spontaneously by the community to meet the needs of the area. Lessons were given under huts or hangars covered with galvanized sheeting.

The buildings have been transformed. Eight new classrooms have been built and equipped, but also twenty individual latrines, a bore hole (photo opposite), an administrative block, including a library, and the property has been redeveloped. The time when sun, wind and rain prevented lessons from taking place is now a distant memory, much to the satisfaction of the pupils.

“We started off having lessons under the ‘appâtâmes’ [constructions with no walls and straw roofs]”, remembers Farasse Koffi Leguede, a third grade pupil. “Permanent buildings were then built. Now, when it rains, we aren’t drenched any more. We learn in good conditions”.

The new latrines are also a marked improvement for the hygiene of pupils and teachers: “We used to use the bush or fields. We now have four latrine blocks: two for girls and two for boys”, adds Forasse. 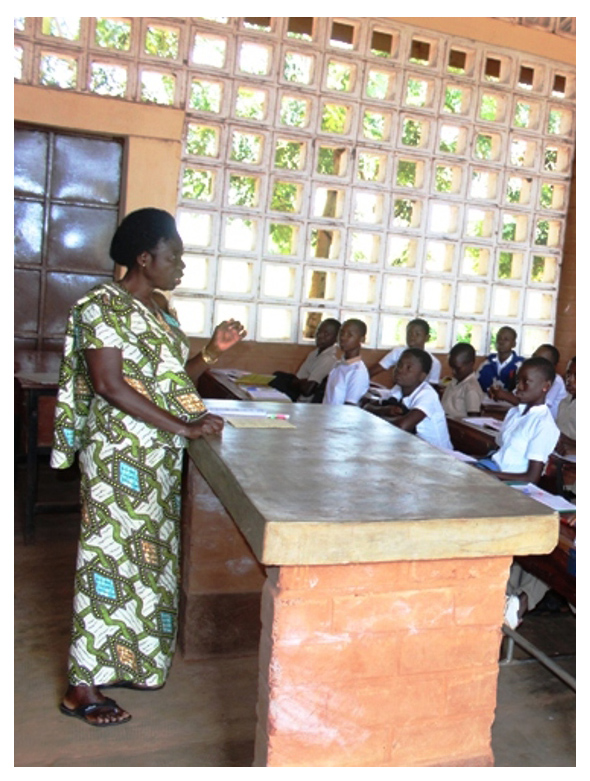 In the context of PAREC, a partnership has also been established with Aide et Action International and Plan International Togo. These NGOs have been working with the Togolese population for education for a long time. Their aim is to involve communities more and promote their action in managing the schools where their children go. It is a model partnership which “really boosts Togo’s education system”, says a clearly pleased Antoine Gizenga, Director of Aide et Action international for Togo and Benin.

Over 300 communities in the two regions have been sensitized to the importance of the education of girls, whose situation continues to give cause for concern. Secondary school girls are vulnerable to social pressures and gender violence which can lead to early dropout. Only 40% of them currently complete lower secondary education.

School actors have also benefited from the sensitization work of Aide et Action International on the thorny issue of schooling for young girls in rural areas. The results of the work can be clearly seen among pupils: “Through PAREC’s awareness-raising sessions, I’ve learnt a lot about how I need to behave so that I don’t get pregnant early while I’m still in school”, says Daniela Agode, a third grade pupil. She has attended community forums on schooling and retention for girls in secondary school.

The secondary school reform also involves supporting staff training. Teachers are the main target. “I have improved my skills. It’s especially helped me in the sub-disciplines in the subject, which are difficult to prepare. It’s also helped me to prepare vocabulary sheets”, explains Nougouma Adjaya, 50, who has been teaching French in this school for six years.

Support for the education system and vocational training in Togo remains a central focus for France’s assistance to the Government of Togo, as has been the case for over fifteen years. Challenges remain in all the territories and the good results of PAREC should soon be built on and extended thanks to a new allocation of funds.