In Vietnam, resilience as seen by young people

© UDJ
Climate
Asia and Pacific Vietnam
IN VIETNAM,
RESILIENCE
AS SEEN BY YOUNG PEOPLE
During a competition organised by the Youth Union and AFD from August 27 to October 14, 2018, Vietnamese youth from 15 to 35 years old were asked to translate the notion of "resilience" in words and images. There were 400 applicants and 11 laureates were awarded. We met them at the awards ceremony early November in Hanoi.

Today, it is the awards ceremony. However, the sky that is normally blue is covered with grey fog. Motorcycle drivers wear masks to avoid breathing gas from the exhaust pipes. The air is unbreathable in comparison with the norm between 0 and 100 (US index): pollution index now is 165 PM 2.5. This situation is far from unusual. The average of the city is twice the standards, four times higher than the level recommended by WHO.

In Hanoi, as in the rest of the country, the population faces a double challenge. They need to reduce pollution but also adapt to the consequences of climate change, to which Vietnam is particularly exposed. The bad weather that is related to climate change has caused an average of 500 deaths per year over the past 30 years. And the economic damage involved represents 1.5% of the country's GDP.

The young laureates we meet are aware of the urgency of climate issues. For Dien, "the impact of climate change is very visible in Vietnam. There are repeated typhoons and bad weather is more and more frequent."

The word "resilience" has no equivalent in Vietnamese. Even in our language, this word has multiple meanings. There is no universal and simple definition. Thus, the competition was an opportunity for participants to reflect on this concept and try to make it more evident. If everyone agrees that resilience is the ability to withstand natural disasters and respond to shocks, each one of us would translate this term differently, which is often difficult to interpret. 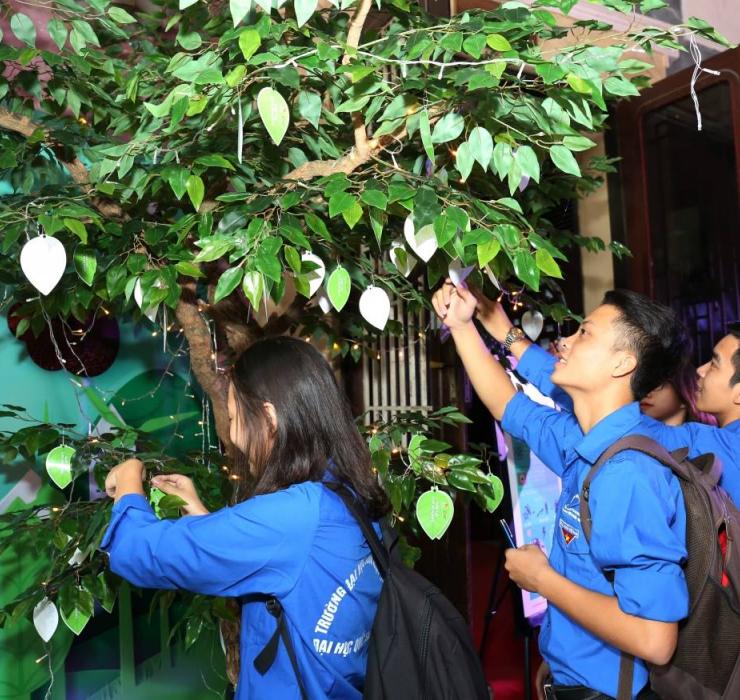 Resilience: a virtuous cycle
Nhat sees resilience as a cycle "which keeps coming back" and that gradually allows "to build the capacity to respond to these multiple shocks and to restore." In his view, this process must be done repeatedly to build a truly sustainable resilience.
► Watch the video

The long way
For Thanh, it is rather a long and winding way. From what she sees as "the state of the environment today": soil pollution caused by rapid industrial development and high urban growth, destroying biodiversity, air pollution... She explains further that people need to come together and take collective action in order to make a difference, including through youth education and environmentally friendly development. At the other end of this path, the environment returns to its original state and it is finally restored.
► Discover the infographic

Solidarity at heart
Hieu herself insists on the fact that the notion of "resilience" must be handled with a human-based approach, by placing it at the centre of all reflections. For her, solidarity is a key factor in strengthening the country's ability to overcome a disaster and rebuild itself.
YOUTH, AN ESSENTIAL ROLE

In facing the challenge of resilience, the laureates are unanimous: young people play a central role. They can, of course, start with small actions e.g. "use less water and electricity, plant trees, recycle household waste," Dien explains and then apologises: "It's not so much, but as a student we have to focus primarily on our studies.” Yet for Thanh, these same studies will allow them to acquire the necessary knowledge to support the climate issue among their loved ones: "Thanks to that, I can inspire others and help them to take action," she says.

A strengthened role for these digital natives who browse for information continuously. "For young people like us, it is easy to collect information on social networks and on the internet. We have a central role to play in spreading this information within communities and across the country," says Nhat.

For Hieu, by understanding the phenomena related to climate change, it is possible to popularise and make these issues accessible to all: "I am committed to fighting climate change by finding out how our world works and understanding the different variables. This is very important to be able to act. If we meet someone who has a negative behaviour for the environment, we can go and explain to that person, so the person can change his/her habits."

AFD, VIETNAM AND THE YOUTH

AFD's strategy in Vietnam is to support the country's "green and resilient" development path around three core priorities, namely the energy transition, resilience of cities and territories, and youth.

AFD goes into action alongside young people through skill development projects in employment-promising sectors as well as projects to support socio-economic integration of the most vulnerable young people, awareness-raising operation and mobilisation with the Youth Union.

It was in this context that the conference "Youth and climate change: challenges of today, what resilience tomorrow?" introduced by Mr. Gérald Darmanin, French Minister of Action and Public Accounts and Mr. Rémy Rioux, Managing Director of AFD, who also awarded the competition's prizes. This awards ceremony took place as part of the celebration of a 45-year cooperation between France and Vietnam and the visit of Mr. Édouard Philippe, French Prime Minister.