© Charlotte Le Layo / AFD
To mark International Migrants Day on 18 December, Khin Mae Soe, a woman from Myanmar who left to build a better life in Thailand, tells us about her emotional journey and her meeting with the Foundation for Education and Development, which is supported by Terre des Hommes France and Agence Française de Développement.

Her energy spreads immediately as she enters the room. She is initially intimidated, but quickly relaxes to tell us her story, an account punctuated by her waving her arms, laughing and showing her sense of humor. Khin Mae Soe is 45. She grew up in Myanmar in a modest family. She had several jobs with her husband in agriculture and fishing. But in 1997, just after their son was born, they both found themselves out of work. Months went by and problems piled up.

At the time, Myanmar was one of the poorest countries in Southeast Asia and faced major political difficulties. Many people tried their luck in the Eldorado of Thailand, which experienced an unprecedented economic boom between 1987 and 1996. This was the case for her mother, who emigrated to Thailand and worked illegally on a shrimp farm. Khin Mae Soe decided to take the chance of offering her son a better life: she borrowed money from her mother and left the country with her husband and their child.

Like most migrants, she used a smuggler to cross the border. He asked for a huge amount of money, 16,500 baht, i.e. 490 euros, but out of sheer desperation they accepted. With a sad smile, she remembers: “Everything went well during the crossing… It was when we arrived that things got difficult.”

In July 1997, Thailand experienced a major economic crisis, which completely broke down the country’s economy. The baht, the Thai currency, was strongly devalued and the country’s financial markets collapsed. The crisis dragged on and the economy was weakened in the long term. When Khin Mae Soe arrived in 1998, she quickly became disillusioned.

She and her family went to live with friends, who were also migrants. Weeks went by without them finding work. They had nothing: no electricity, no telephone, no means of transport… As illegal migrants, they had to hide at home and feared police raids. “We were not allowed to go out”, says Khin Mae Soe with a shudder. “Neither to go shopping, nor to look for work… We lived confined and in fear.”

They rapidly became a financial burden for their friends: “We weren’t welcome anywhere. But we could do nothing, apart from hope.” With a young child, the family added to their difficulties, as employers absolutely refused to hire a young mother. They started to lose hope and thought about returning to Myanmar.

After four months, they finally got some luck: there was a vacancy on the rubber plantation where their friends worked. The owner hired her husband, then Khin Mae Soe. The family lived hidden in the woods for four years, just a few kilometers from the paradise beaches that already attracted thousands of tourists at the time.

In 2002, the Thai government took measures to regularize the situation of migrants in the country: signing of an agreement with Myanmar, introduction of a residence and work permit system… Khin Mae Soe and her family benefited from this. After an ordeal that had lasted four long years, their situation was finally regularized. They began to pull through and save some money.

This respite only lasted a few years. In 2005, misfortune struck them again. When she looks back at this period, Khin Mae Soe is filled with emotion again. Her hands start to tremble. She pulls herself together and tells what happened.

Starting all over again

On a day in March, the couple went home after working long hours. They were horrified to discover that their house had been burgled, emptied and ransacked. The thieves took everything: jewelry, money, and especially all the family’s papers. Their world collapsed around them.

They were at a total loss and returned to Myanmar. They spent four months there, during which they did not find work and lived in extremely precarious conditions. They decided to return to Thailand to try to renew their residence permits. But to do so, they needed to provide the old document… “We didn’t know what to do, we didn’t speak Thai and we didn’t know how the administration worked. We were entirely on our own”, explains Khin Mae Soe.

At the time, the Foundation for Education and Development (FED) had just been relocated to Phang Nga in Thailand. “Other migrants told us that people from FED could help us with the procedures”, says the young woman. The Director of FED, Htoo Chit, took things in hand: he sent a courier to get their file from the immigration office and help them carry out their procedures.

The couple rapidly got their legal documents and everything became easier: Khin Mae Soe and her husband found work on a rubber plantation and moved into a house. They could finally get their life back on track.

This meeting with Htoo Chit and FED was a turning point for Khin Mae Soe. She realized that she had rights and began to understand how to progress in this environment. She attended many training courses: “I went as soon as I could. Even on days when I was busy, I cancelled everything so I could go there! It was a new world opening up to me. I attended training sessions on our rights as migrant workers, but also on human rights, domestic violence… They helped me liberate myself, gain self-confidence.”

In 2014, the migrant from Myanmar reached a new stage and became a Community Leader, a position whose role involves circulating the information provided by FED during training for communities. Her peers flocked to her door to get advice: Where do you go when you fall ill? How can you report the illegal actions of an employer? She very rapidly built a strong relationship of trust with them.

They know that they can count on me to help them assert their rights.

The programs implemented by FED, with support from the NGO Terre des Hommes France and Agence Française de Développement (AFD), also include specific assistance for women: the fight for equality and against sexual violence. Khin Mae Soe gives our interpreter a mischievous look and bursts out laughing as she says: “When I told my husband I was going to these training sessions, he disapproved. I told him that I did what I liked, that we were equal!”

Khin Mae Soe relaxed as she told her story, but that is not all. Her hands stopped trembling and she looked more sure of herself. She confidently concludes: “At 55, it’s the law, I have to go back to Myanmar. But this time, I don’t want to do casual work: I want to work for an association and help people.” To prevent others from having the painful memories of a difficult life. 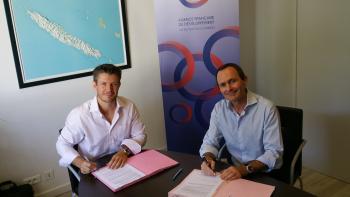