Installation of mirrors at the NOOR II solar power plant in Ouarzazate (Morocco) © Francesco Zizola / AFD
Morocco is reflecting on its development model with a view to meeting the Sustainable Development Goals by 2030. Mounssif Aderkaoui, Director of Studies at the Ministry for the Economy and Finance of the Kingdom of Morocco, sets out some of the central themes of the dialogue with AFD, from the impact of climate change to reducing inequalities. 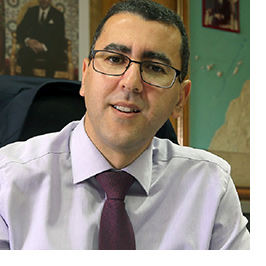 How does this approach fit into the strategy of the Moroccan Ministry for the Economy and Finance?

This cooperation, which has now been elevated to the level of strategic dialogue, consists of three parts corresponding to the priority areas of the Ministry for the Economy, Finance and Administrative Reform (MEFRA). The aim is to measure the impact of climate change on our economy, to study the redistributive effects of Moroccan fiscal policy and to deepen the regional integration process, in particular by measuring the impacts of the African Continental Free Trade Area (AfCFTA) on our economy.

These questions are central to the transformation of Morocco’s national development model. The aim of this partnership is to identify the progress already made in many areas but also the shortcomings to be addressed in order to broaden development prospects.

The objective is to build the foundations for an inclusive economy that is resilient to climate change. Strengthening the regional anchoring of the Moroccan economy is also crucial, particularly in such a complex geopolitical context marked by frequent crises.

This partnership has already enabled a joint study measuring the impact of Moroccan fiscal policy on reducing inequalities. What are the main conclusions and what levers for improvement have already been identified?

This study came at just the right time as it addresses a problem that is central to Morocco’s project to redefine its development model. The role of the State, through its fiscal policy, remains fundamental in reducing the social and spatial inequalities that persist in our country.

It revealed that, with the exception of the two highest deciles of the Moroccan population, for which the amount of taxes paid exceeds the profits they derive from redistribution, all the others are net beneficiaries of our fiscal policy. The poorest decile benefits the most from redistribution. This category of the population benefits, in particular, from free public services in education and health, as well as from transfers and subsidies on consumer products.

First priority: measure the impact of climate change on the Moroccan economy. How will you proceed? What tools can be used?

GEMMES, a new modelling tool developed by AFD, will enable us to analyze the impacts of the various possible climate scenarios on the Moroccan economy. In particular, we will be able to carry out simulations of agricultural production and necessary surface water resources by 2050 and compare these figures with the resources that will actually be available.

This partnership also aims to reflect on the conditions for successful African economic integration, including by establishing a continental free trade area. Can you tell us more about it?

This is an important issue for our country, which has been working actively since its return to the African Union in favor of boosting cooperation mechanisms at the continental level. This free trade area is fundamental if we want to accelerate Africa's development and strengthen its position in the globalizing world.

With intra-African trade expected to grow by 52% in the short term, establishing this area would also allow Africa to have the largest internal market in the world. This is a real development opportunity for a continent whose potential is not fully mobilized, precisely because of the tariff and non-tariff distortions that weigh on trade relations between African countries.

The path towards this free trade area requires an effort to adapt the trade policies of the member countries, but also to overcome the main constraints that have kept intra-African trade at very low levels so far compared to the other regional groupings in Asia and Latin America, to mention only the example of emerging and developing countries.

This partnership should enable us to better prepare the Moroccan economy for this pivotal event. With the support of the IFPRI, the study launched by AFD will make it possible to carry out macroeconomic and sectoral impact simulations based on the various scenarios for the evolution of the AfCFTA.