© Jeanne Vanuxem-Milleliri / AFD
In Okpoma, in the south-east of the country, a new drinking water treatment plant was commissioned in early December 2017. Water is central to AFD’s action in a country where 4 inhabitants in 5 do not have secure access to drinking water.

Refreshing news for the residents of the city of Okpoma: 65,000 of them can now drink high-quality water via 3,000 private connections. AFD, in partnership with the World Bank, has supported the creation of a new water treatment plant and improvements in connections to drinking water. A USD 43.9m loan is contributing to financing the first drinking water network financed by AFD in the country. Okpoma is one of the two secondary cities in Cross River State to benefit from this support in the field of access to water.

The Okpoma facility was commissioned on 1 December 2017 in the presence of AFD’s Director in Abuja, Olivier Delefosse, the French Ambassador to Nigeria, Denys Gauer, and the Deputy Governor of Cross River State, Ivara Esu.

This initiative is part of the National Urban Water Sector Reform Program II. It has also allowed two neighborhoods in Lagos, the largest city in the country, to reinforce their drinking water distribution networks. This plan reached completion in late December 2017. Following on from Cross River State and the city of Lagos, AFD has recently started operating in 5 other States in the country to secure access to the precious resource. It is supporting three other water supply and distribution management projects by suppliers in Enugu, Ondo, Plateau, Kano and Ogun. AFD has consequently made the 6th Sustainable Development Goal (access to water and sanitation) a focus area for its action in Nigeria.

A long way to go

Nigeria has the potential of a regional power, by both its economic and demographic weight. The situation for water gives more cause for concern: less than 19% of the population has secure access to drinking water. This problem of drinking water supply is also related to the infrastructure decaying. Consequently, AFD aims to improve access to water and resource management (quality of services, financial sustainability of water suppliers). A total of some USD 350m has been committed to support the urban water sector reform in Nigeria, making AFD a leading donor in this area. 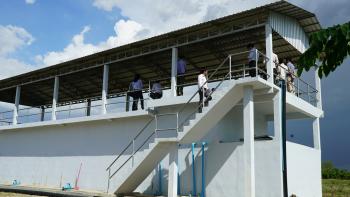