Turkey: A New Hospital on the Syrian Border

© AFD
To address the influx of Syrian refugees in Hatay Province, the European Union and AFD are supporting the construction of a new hospital in Dörtyol. Boasting an increased patient capacity and new services, it will be able to treat more patients, both Turkish and Syrian, under better conditions. The first stone of the building was laid on April 16, 2019.

Because of its geographical position, bordering Syria, Turkey has received more than 3.5 million Syrian refugees since 2011. The country not only grants them temporary protected status, but also provides access to healthcare, education, and means of subsistence. To support these efforts, in 2015 the European Union set up a €3 billion facility for refugees in Turkey. Access to healthcare for refugees is one of the top priorities among the planned assistance measures.

A Region Under Pressure

Via the facility, the European Union allocated €40 million to AFD to improve the accessibility and quality of health services in Hatay Province. With more than 430,000 registered refugees, the region is among those with the highest numbers of Syrians under temporary protection. This growing population has made it a challenge to provide access to basic services.

In response, AFD and the Turkish Ministry of Health signed an agreement to begin building a new public hospital in Dörtyol, in the northern part of the province. It will replace the current building, which dates from 1983 and is now completely full. Construction began on April 16, when the first stone was laid.

The new hospital will be fully operational by March 2021.With its 250 beds and modern equipment, it will be able to treat more patients, both Turkish and Syrian, in essential areas including emergency services, obstetrics, and pediatrics. The establishment will also be home to two new units, palliative care and pediatric intensive care.

This improved offering will help better meet the needs of both refugees and the host population. It will also allow locals to avoid traveling to another hospital a hundred kilometers away, far from friends and family, in case of serious illness.

For me, the biggest relief is that thanks to the new hospital, we’ll be able to keep all the patients who come through our doors rather than having to transfer them to other hospitals that are further away.

AFD’s action also includes developing medical technical cooperation between France and Turkey. In addition to supervising the RFP for building and equipping the new hospital, and then the construction itself, AFD (and Expertise France) is therefore preparing to put Turkish hospital managers in contact with their French counterparts.The aim is for them to collectively consider how to improve the quality of the healthcare system in the province, both ambulatory and hospital care.

Jordan: Water to Smooth Relations Between Locals And Refugees

In Lebanon, Training for A Trade… And for Living Together

Turkey: At the Factory of Gender Equality 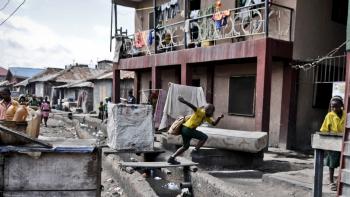