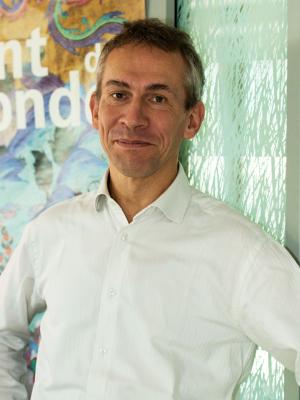 Economist Bertrand Savoye is responsible for research programmes aimed at promoting economic and social information on the French Overseas Territories as well as private sector activity, particularly among SMEs, in the French Overseas Territories and developing countries. He also works on statistical information systems and participates in macroeconomic analyses.

A professor of economic and social science and a graduate of the École Normale Supérieure de Cachan, Bertrand Savoye also holds a degree in banking and finance from Université Paris Nanterre and a PhD in Economics. He began his career in 1989, as a research fellow with the Fondation pour la Recherche Economique et Financière. Then, from 1990 to 1997, he became an economist and statistician with the French National Institute of Statistics and Economic Studies (INSEE) and the European Statistical Office (Eurostat).

He joined AFD for the first time in 1997. There, he has successively served as an economist in the Macroeconomic Analysis section, country manager, and then head of the training division at the Center for Financial, Economic and Banking Research (CEFEB, now AFD Campus).

In 2004, he joined the Instituts d’Emission des Départements et Collectivités d’Outre-Mer (IEDOM and IEOM), where he was in charge of the unit that conducts research into companies and bank monitoring.

In 2008, Bertrand Savoye returned to AFD, first as head of microfinance and mesofinance projects (financing that is slightly bigger than microfinancing and less than major loans, which are meant for medium-sized firms). He later served as an evaluator in the assessment and capitalization division. In 2016, he joined the Economic Diagnostics and Public Policy Department.