Her research focuses on the way in which the commons approach calls development assistance into question. Given the mixed views about the effectiveness of public governance and market dynamics, the commons provide a theoretical framework and proposes a number of operational cases to move away from the public/private dichotomy. The commons approach urges us to understand countries’ and regions’ transitions in a holistic manner (ecological, social, economic) and emphasize issues which otherwise, are likely to be neglected, such as biodiversity, health, education and security.

Stéphanie Leyronas joined AFD in 2000. For nine years, she was responsible for appraising and monitoring water and sanitation programs financed in a number of countries in Africa, Asia and the Middle East, and was subsequently appointed Deputy Director of AFD’s Water and Sanitation Division in 2010. She joined the Research Department in September 2014.

Stéphanie Leyronas studied at the Mines ParisTech school and holds a Master’s Degree in Environmental Science (with a major in developing countries) from the National Institute of Agronomy of Paris-Grignon (INA-PG / AgroParisTech). 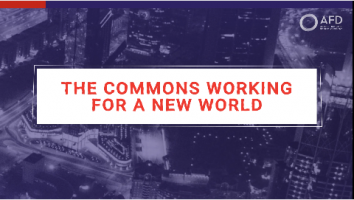 Vidéo
The Commons Working For a New World