At the end of apartheid, in 1994, hopes for political, economic and social renewal are emerging in South Africa. Among the preoccupations of the new ANC government: wipe out inequalities and generalize access to basic services. Realizing the right to water, as it is recognized in the new
Institutional document
Evaluation document
Downloaded 476 times 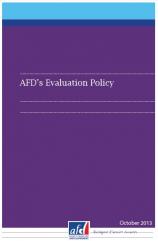 This document constitutes a reference text for AFD staff, at both headquarters and in the field offices, for the supervisory ministries, for AFD’s counterparts, partners and interlocutors, i.e. all the stakeholders who implement AFD’s financing or work with it, including NGOs, consultants and the
Research document
Downloaded 883 times

Since 2008, the countries of the Middle East and North Africa (MENA) have been affected by different kinds of shocks. The international financial crisis and then the euro-zone sovereign debt crisis have brought on a sharp slowdown in the growth of goods and services exports from the MENA countries
Research document
Downloaded 6521 times 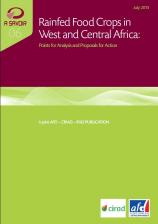 The rise in world agricultural prices in 2008 revealed the fragility of food security in many developing countries. Poor populations in sub-Saharan Africa are the biggest victims of this fragility. Rainfed food crops can play a unique role on the continent bysupplying regional markets, increasing
Research document
Downloaded 3019 times

The aim of this study is to better understand, from the information collected on missions undertaken in Senegal, Benin, Ghana, Mozambique, and Brazil, the scope and methods of Chinese and Brazilian cooperation interventions in western and southern Africa’s agricultural sector
Research document
Downloaded 7492 times 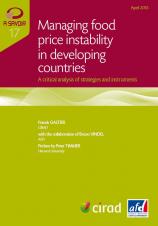 Based on a comprehensive review of the theoretical and empirical literature, this book identifies and analyzes four "pure" strategies that can be employed to manage food price instability. It is intended for policy-makers, researchers, teachers, students, and all those interested in price
Research document
Downloaded 1348 times

PEFA Methodology and Sub-National Governments: What Lessons for AFD? 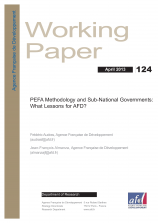 The analysis of the application of the PEFA framework methodology to sub-national entities, developed here through the examination of 56 evaluation reports, and based on the practical experience of team-led projects at AFD, shows that it is globally adapted to decentralized governments. Nonetheless
Research document
Downloaded 5902 times