Based in Nairobi, the Eastern Africa Regional Office covers eleven countries: Burundi, Djibouti, Eritrea, Ethiopia, Kenya, Uganda, Rwanda, Somalia, Sudan, South Sudan and Tanzania. This regional strategy is a vector for the diversification and growth of AFD Group’s activity in the region and is
Institutional document
Downloaded 4 times 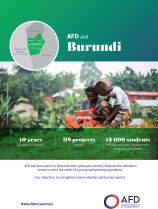 AFD has been active in Burundi since 1978 and currently finances the education sector to meet the needs of a young and growing population. Our objective: to strengthen social cohesion and human capital
Video
Viewed 525 times

The city of Djibouti is home to 75 % of the total population of the eponymous country. Increasing urbanization has led to the explosion of the Balbala district.  The result is a disorganized urban fabric, where water and sanitation networks are almost non-existent. Its disadvantaged population thus
Video
Viewed 730 times

This eight-country evaluation seeks to measure how the ELAN Program methods of written language acquisition have an impact, during the first two years of primary school (Grade 1 and Grade 2), on oral and written language performance in African languages (one language per country) and in French. A
Research document
Downloaded 1304 times

The current development of African education systems focuses on the perspective of universal completion of six years of schooling. This perspective, targeted by the international community for the year 2015 (Dakar declaration, Millennium Development Goals), will no doubt be reached by a number of
Evaluation document
Downloaded 1081 times