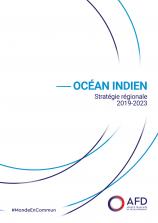 At the Interministerial Committee for International Cooperation and Development (CICID) on February 8, 2018, the government made a commitment to strengthen the integration of overseas territories into their regional ocean basins by supporting cooperation projects with neighboring states. Measure
Institutional document
Downloaded 141 times

Present in the Atlantic, Pacific and Indian Oceans, France has five departments and regions and seven overseas collectivities which are home to 2.7 million French citizens. Scattered across the globe, the overseas territories concentrate 97% of France’s exclusive economic zone (EEZ) – the second
Institutional document
Downloaded 222 times

In the context of COP21 and the Paris Agreement, countries have made voluntary commitments to fight against climate change and adapt to its impacts. The challenge now lies in making the Paris Agreement operational by implementing these commitments – called Nationally Determined Contributions (NDCs
Research document
Downloaded 2546 times

It is now a widely recognised fact in the economic literature that the level of per capita income and the degree of sectoral concentration of economic activity evolve together over the long term. The empirical research of Imbs and Wacziarg (2003) has notably shown that production diversification
Research document
Downloaded 1304 times