136 result(s) for your search
FiltresX

The urban fabric initiative brings out and supports small or temporary micro-projects, carried by the inhabitants and quickly implemented, on the sites of urban projects financed in parallel by the Agency. ©AFD2020
Video
Viewed 201 times

As the Aichi 2010 targets come up for revision by the international community, the evaluation results outline potential answers to what works and does not work in the area of biodiversity protection, and solutions to be implemented. Many points to ponder in the reflections underway and the
Video
Viewed 154 times

The city of Djibouti is home to 75 % of the total population of the eponymous country. Increasing urbanization has led to the explosion of the Balbala district.  The result is a disorganized urban fabric, where water and sanitation networks are almost non-existent. Its disadvantaged population thus
Research document
Downloaded 241 times

Citizen participation could leverage public action to improve access to water in remote areas and address second-string subjects such as sanitation. However, this still very incantatory notion with its variable configurations first needs to be empirically explored and defined if it is to have the
Institutional document
Downloaded 37 times

Since 2017, the Inter-American Development Bank (IDB) and AFD, in partnership with the Institute for Sustainable Development and International Relations (IDDRI), have been supporting the Deep Decarbonization Pathways (DDP-LAC) project. The aim of this project is to build the capacities of six Latin
Institutional document
Downloaded 33 times

The “Energy Access in the G5 Sahel Countries” Conference is the first edition of an annual meeting organized by the Energy Group of the Sahel Alliance, which aimed at strengthening the coordination of the various actors and contributing to experience sharing and innovation. Coordinated by AFD in
Institutional document
Downloaded 30 times

The Central African Republic (CAR) is experiencing a situation of chronic conflict, with militant activity by armed groups spreading over a large swath of the country, including violent attacks against civilian populations. The situation is volatile and made further complex by institutional and
Research document
Downloaded 16 times

Latin America and the Caribbean (LAC) has the least carbon-intensive electricity sector of any region in the world, as hydropower remains the largest source of electricity. But are existing plans consistent with the climate change goals laid out in the Paris Agreement? In this paper, we assess
Video
Viewed 308 times 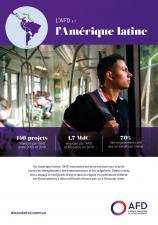 In Latin America, AFD focuses on projects which combat climate change and inequalities. It has committed 8.7 billion euros in the region since 2009, and aims to increase financing to 2 billion euros per year by 2020