The project aims to contribute to the strengthening of the cashew nut sector in order to allow a sustainable improvement of farmers' incomes while preserving natural resources. ©AFD2020
Video
Viewed 1 time

This project, financed by AFD and the European Union, aims to reduce poverty among rural populations in Cambodia while reducing the country's vulnerability to climate change by rehabilitating around 20,000 ha of irrigated perimeters, building the capacities of the actors involved and developing
Institutional document
Downloaded 5 times

Covid-19: Resources for the Water and Sanitation sector 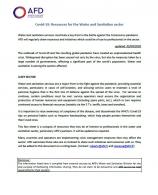 The outbreak of Covid-19 and the resulting global pandemic have created an unprecedented health crisis. Widespread disruption has been caused not only by the virus, but also by measures taken by a large number of governments, affecting a significant part of the world's population. Water and
Video
Viewed 1 time

Like many other Protected Areas in the country, the Gilé National Reserve has suffered greatly from 25 years of conflict, war of independence and civil war. She was also very affected by the recurrent lack of human and financial resources during the post-war period. Today, it continues to face
Institutional document
Downloaded 6 times

A partner of India since 2008, AFD works in agreement with Indian authorities to promote green and inclusive growth. It operates through soft loans to the state and public enterprises, as well as technical assistance programs. Our goal: to contribute to a cleaner and more efficient energy sector
Research document
Downloaded 2 times

This paper conducts a detailed analysis of the trends and patterns of women’s role in household non-agricultural enterprises in Egypt. The paper uses the Egypt Labor Market Panel Survey (ELMPS) waves of 1998, 2006, 2012 and 2018. First, the paper examines whether households have enterprises and how
Institutional document
Downloaded 93 times 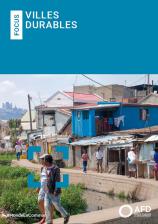 This paper examines the relationship between internal, international, and return migration in Egypt. Using the Egypt Labor Market Panel Survey (ELMPS), this paper documents the evolution and patterns of internal migration over time. We examine patterns and trends of international and return
Video
Viewed 12 times

The Copperbelt Province, Northern Zambia, is the second most populous province in the country with some 2 million inhabitants, 60% of which live in underserved urban areas where access to drinking water and sanitation stands at 25% compared to national average of 38%. The existing water and