The largest archipelago in the world with nearly 17,000 islands and the 6th Exclusive Economic Zone of the world (sea surface of 6 million km²), Indonesia is a country that conceives its development and international integration through its unique relationship with the oceans. More than 6 million
Vidéo
Downloaded 0 times

The city centre of Johannesburg, historically the heart of the city's economic activity, has seen a sharp decline since the 1970s: many buildings were abandoned, public spaces were left in decline and the crime rate rose sharply. This is particularly visible in public parks. Since the 2000s, the
Vidéo
Downloaded 0 times

In the heart of the new city of Zenata, the first ground of the partnership between AFD and the famous NBA (National Basketball Association) was born. Adorned with the colors of the Sustainable Development Goals (SDGs), this brand new sports facility is designed to accommodate for several years
Document de recherche
Downloaded 6 times

This paper analyzes the impact of large scale investments on transport infrastructure on the spatial evolution of the productive structure in Brazil, in particular the industry/service mix. It does so using municipal-level data from the census between 1970 and 2010, a period over which the road
Publication institutionnelle
Downloaded 48 times

Luang Prabang is an ancient royal capital in northern Laos. It is located on an exceptional site along the Mekong and is home to an extremely rich architectural heritage comprising temples, traditional Lao houses and colonial constructions, for which it was inscribed on the UNESCO World Heritage
Document d'évaluation
Downloaded 119 times 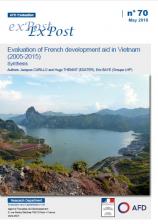 The Ministry of Europe and Foreign Affairs (MEAE), the Directorate General of the Treasury (DG Trésor) and the French Development Agency (AFD) have requested an evaluation of French development aid to Vietnam between 2005 and 2015. The objective of this study was to determine the French
Publication institutionnelle
Downloaded 30 times

Containing crime without affecting the livability of the urban environment is a major challenge in our society. Traditionally, researchers relate crime to socio-economic disorganization and people’s routine activity, as it influences effective control and suitable targets. An important open
Document de recherche
Downloaded 15 times

This study focuses on the local and regional impact of large-scale gold mining in Africa in the context of a mineral boom in the region since 2000. It contributes to filling a gap in the literature on the welfare effects of mineral resources, which, until now, has concentrated more on the national