The surge in Chinese investments in Africa has brought about a flurry of questions expressing concern over their ecological impact in the host countries. Still, the principles and implementation of environmental management by Chinese firms remains largely unknown.This work, born of a unique
Research document
Downloaded 17850 times

Today, development actors see urban heritage as a resource for their territory, which is why they need to define its economic value. This evaluation is a delicate exercise as such patrimony is generally a complex reality, consisting of four interdependent economic, cultural, social and
Research document
Downloaded 5799 times

Climate change has become the most important global issue of our time and now occupies a key place on the global governance agenda. Recent attempts to create a concrete framework for mitigation have fallen short. This failure has been explored in a number of studies. These have mostly focused on
Evaluation document
Downloaded 1946 times 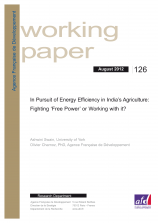