The largest archipelago in the world with nearly 17,000 islands and the 6th Exclusive Economic Zone of the world (sea surface of 6 million km²), Indonesia is a country that conceives its development and international integration through its unique relationship with the oceans. More than 6 million
Publication institutionnelle
Downloaded 21 times

Despite its low contribution to global warming, Cambodia is one of the most vulnerable countries to climate change in the world, which directly threatens the country’s prodigious biodiversity. AFD is fully committed to protecting the ecosystem and biodiversity in Cambodia. It is also active in the
Vidéo
Downloaded 0 times

Cities have an absolutely essential role to play in the fight against climate change. Anne Odic, Head of cities division at AFD explains it in a few minutes
Vidéo
Downloaded 0 times 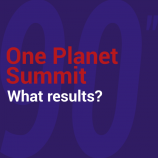 Luang Prabang is an ancient royal capital in northern Laos. It is located on an exceptional site along the Mekong and is home to an extremely rich architectural heritage comprising temples, traditional Lao houses and colonial constructions, for which it was inscribed on the UNESCO World Heritage
Document d'évaluation
Downloaded 12 times 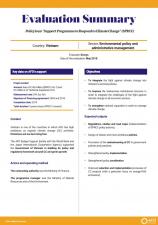 In Vietnam, the climate policy loan “Support Programme to Respond to Climate Change” (SPRCC) was subject to an evaluation in May 2018. Although CO2 emissions are still low in Vietnam, they are rising quickly. This is why the AFD has developed high ambitions as regards climate change activities and
Publication institutionnelle
Downloaded 30 times

A comparative analysis of agroecology network led to a classification based on their conditions of emergence, their structure and governance mechanisms. The study points the strengths and weaknesses of the existing networks at the different scales. It shows that the different agroecology schools
Document d'évaluation
Downloaded 1067 times

In close partnership in 2008, 2009 and 2010, JICA and AFD approved a series of “climate” budget loans to the Indonesian Government in order to facilitate the design and implementation of an ambitious national policy to combat climate change (CC), supported by a high-level policy dialogue. This ex