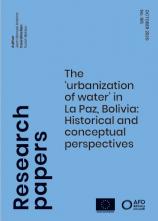 This essay analyzes the historical production of water inequities in the city of La Paz, Bolivia. It relies on the concept of ‘urbanization of water’ to present historical evidence and conceptual reflections about the justifications of actions and naturalization of outcomes regarding water
Research document
Downloaded 0 times 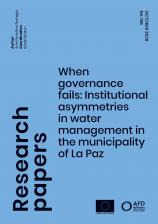 This article reflects on the emergence of asymmetries in the institutionality of the water and sanitation sector, primarily caused by the presence of political, social and economic forces that catalyze a process of liquefaction of sectoral and competence-driven regulations by the main actors. In
Research document
Downloaded 230 times

Containing crime without affecting the livability of the urban environment is a major challenge in our society. Traditionally, researchers relate crime to socio-economic disorganization and people’s routine activity, as it influences effective control and suitable targets. An important open
Evaluation document
Downloaded 369 times

AFD is regularly called upon to support urban development projects in areas recovering from crises, be they natural or political. Above and beyond the simple reconstruction of buildings, such requests bring us to question issues regarding the sustainable regeneration of social and economic dynamics
Evaluation document
Downloaded 1073 times