In South Africa, for the “Urban development” sector, the partial financing of the City of Johannesburg’s medium-term budget was subject to an evaluation in May 2018. This budget support operation was implemented in the context of AFD’s strategic priorities for urban development. It aimed at
Institutional document
Downloaded 75 times

Southern Africa has some of the most developed infrastructure in the continent. However, the region still faces numerous challenges, such as insufficient energy supply, highly priced and unpredictable transport, lack of low-cost access to information and communication technologies, and high numbers
Research document
Downloaded 72 times 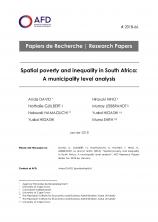 In South Africa, for the “Low-cost housing” sector, the credit lines to Rand merchant bank (RMB), Nedbank and Amalgamated banks of South Africa (ABSA) were subject to an evaluation in July 2017. The lack of access to affordable mortgage finance was identified in 2003 as a key constraint facing low
Research document
Downloaded 1150 times

For cities to protect themselves against climate change, strong political commitment is of course necessary. But just this is not enough: A panoply of institutional, strategic and social factors is also required. This article presents the conditions—as identified by three AFD-commissioned research
Research document
Downloaded 3766 times