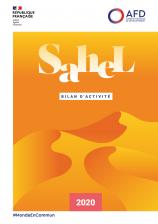 The Greater Sahel region was once a prosperous region in Africa. The region is clearly defined by its geography and climate. It also has the lowest GDP per capita of all the six African regions identified by AFD. Over the past decade, the deterioration of the security situation has profoundly
Institutional document
Downloaded 58 times

Despite their diversity, the territories around the Atlantic Ocean share common issues that call for a regional approach to development. This can consist in encouraging dialogue among stakeholders, finding sustainable solutions on a regional scale, and helping to improve living conditions for the
Research document
Downloaded 53 times

Despite their diversity, the States and territories of the Atlantic Basin share common issues that call for regional development. This approach can be used to encourage dialogue among stakeholders, find sustainable solutions on a regional scale, and ensure decent living conditions for local
Institutional document
Downloaded 141 times

Present in the Atlantic, Pacific and Indian Oceans, France has five departments and regions and seven overseas collectivities which are home to 2.7 million French citizens. Scattered across the globe, the overseas territories concentrate 97% of France’s exclusive economic zone (EEZ) – the second
Research document
Downloaded 1304 times