Despite their diversity, the territories around the Atlantic Ocean share common issues that call for a regional approach to development. This can consist in encouraging dialogue among stakeholders, finding sustainable solutions on a regional scale, and helping to improve living conditions for the
Video
Viewed 12 times 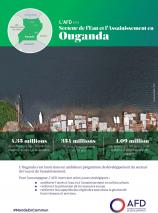 Based in Nairobi, the Eastern Africa Regional Office covers eleven countries: Burundi, Djibouti, Eritrea, Ethiopia, Kenya, Uganda, Rwanda, Somalia, Sudan, South Sudan and Tanzania. This regional strategy is a vector for the diversification and growth of AFD Group’s activity in the region and is
Research document
Downloaded 51 times

Despite their diversity, the States and territories of the Atlantic Basin share common issues that call for regional development. This approach can be used to encourage dialogue among stakeholders, find sustainable solutions on a regional scale, and ensure decent living conditions for local
Research document
Downloaded 20 times

Present in the Atlantic, Pacific and Indian Oceans, France has five departments and regions and seven overseas collectivities which are home to 2.7 million French citizens. Scattered across the globe, the overseas territories concentrate 97% of France’s exclusive economic zone (EEZ) – the second
Evaluation document
Downloaded 369 times

AFD is regularly called upon to support urban development projects in areas recovering from crises, be they natural or political. Above and beyond the simple reconstruction of buildings, such requests bring us to question issues regarding the sustainable regeneration of social and economic dynamics
Research document
Downloaded 1806 times