Weather and seasonal forecasts give African farmers the information they need to prepare for climate shocks and change their practices.These changes are generally economically beneficial. Yet consideration of the business model, forecast dissemination institutions and target users is key to service
Research document
Downloaded 11 times

Latin America and the Caribbean (LAC) has the least carbon-intensive electricity sector of any region in the world, as hydropower remains the largest source of electricity. But are existing plans consistent with the climate change goals laid out in the Paris Agreement? In this paper, we assess
Evaluation document
Downloaded 17 times

Southern Africa has a rich natural heritage of global significance to the world’s climate and biological diversity. Unfortunately, the capacity of nature to maintain this biological wealth is rapidly diminishing due to habitat loss and degradation resulting from unsustainable development, pollution
Institutional document
Downloaded 49 times

Southern Africa has some of the most developed infrastructure in the continent. However, the region still faces numerous challenges, such as insufficient energy supply, highly priced and unpredictable transport, lack of low-cost access to information and communication technologies, and high numbers
Evaluation document
Downloaded 6 times

Each year thousands of people and millions of dollars in assets are affected by flooding in Senegal; over the next decade, the frequency of such extreme events is expected to increase.  However, no publicly available digital flood maps, except for a few aerial photos or post - disaster assessments
Evaluation document
Downloaded 9 times 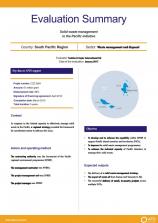 In the South Pacific region, for the “Waste management and disposal” sector, Solid waste management in the Pacific initiative was subject to an evaluation in January 2017. The project was implemented to respond to the limited capacity demonstrated to effectively address the issue of waste disposal
Evaluation document
Downloaded 0 times

In Ghana, the District development facility project (DDF) was subject to an evaluation in September 2015. Access to funds by the Metropolitan, municipal and district assemblies (MMDAs) for implementation of local socioeconomic development projects was limited. The government of Ghana partnered
Research document
Downloaded 1770 times