Across the world, flooding remains the most frequent and most damaging natural risk. This technical report begins by exploring the reasons for this state of affairs: hydrological regimes, the existence of extreme events as part of a continuous distribution of possibilities, and the concepts of
Institutional document
Downloaded 13 times 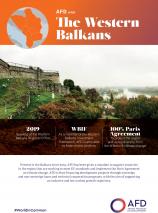 Present in the Balkans since 2019, AFD has been given a mandate to support countries in the region that are working to meet EU standards and implement the Paris Agreement on climate change. AFD is thus financing development projects through sovereign and non-sovereign loans and technical
Institutional document
Downloaded 243 times

The security, humanitarian, and sociopolitical situation in the Sahel has continued to deteriorate since the 2012 crisis in Mali, with a significant increase in conflict hotspots. More than one million people, according to OCHA reports, have been forcibly displaced in the G5 Sahel countries, due to
Video
Viewed 578 times

Inclusive economic and social recovery around Lake Chad (RESILAC) Like Arafa, 3 million people had to flee their homes because of the security crisis in the Lake Chad region. As part of the Sahel Alliance, we provide psychological and professional assistance to these refugees, so that they can
Research document
Downloaded 634 times

From 2009, insecurity linked to the insurgency of the Boko Haram group and its repression spreads from the heart of Nigerian Borno to the north-east of the country and then to the border areas of neighboring countries, Cameroon, Niger and Chad. The crisis has progressively affected the entire
Research document
Downloaded 240 times

For twenty years now, the Sahel region has been marked by rising insecurity, political crises, and poorly controlled flows of people, arms and illegal goods, with a major risk of States becoming destabilized. In the wake of the war in Libya and the Malian crisis, causes, arms, and combatants have
Research document
Downloaded 1324 times

Self-produced food amounts to less than half of the total food that people consume, and the provision of food is therefore largely reliant on market supply, in urban and rural areas alike; domestic food market are considerably more important than export markets for agriculture production; urban and