Weather and seasonal forecasts give African farmers the information they need to prepare for climate shocks and change their practices.These changes are generally economically beneficial. Yet consideration of the business model, forecast dissemination institutions and target users is key to service
Institutional document
Downloaded 22 times

Despite its low contribution to global warming, Cambodia is one of the most vulnerable countries to climate change in the world, which directly threatens the country’s prodigious biodiversity. AFD is fully committed to protecting the ecosystem and biodiversity in Cambodia. It is also active in the
Institutional document
Downloaded 17 times

Southern Africa has a rich natural heritage of global significance to the world’s climate and biological diversity. Unfortunately, the capacity of nature to maintain this biological wealth is rapidly diminishing due to habitat loss and degradation resulting from unsustainable development, pollution
Institutional document
Downloaded 29 times 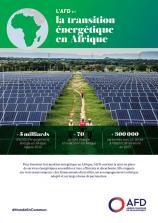 To promote the energy transition in Africa, AFD is supporting the development of efficient and low-carbon energy services that are accessible to all. It draws on three key strengths: diversified financing, customized technical assistance and an extensive network of partners
Research document
Downloaded 690 times

Each year thousands of people and millions of dollars in assets are affected by flooding in Senegal; over the next decade, the frequency of such extreme events is expected to increase.  However, no publicly available digital flood maps, except for a few aerial photos or post - disaster assessments
Research document
Downloaded 1113 times

A comparative analysis of agroecology network led to a classification based on their conditions of emergence, their structure and governance mechanisms. The study points the strengths and weaknesses of the existing networks at the different scales. It shows that the different agroecology schools
Research document
Downloaded 1772 times

In close partnership in 2008, 2009 and 2010, JICA and AFD approved a series of “climate” budget loans to the Indonesian Government in order to facilitate the design and implementation of an ambitious national policy to combat climate change (CC), supported by a high-level policy dialogue. This ex
Research document
Downloaded 3759 times