AFD’s field of intervention in Southeast Asia covers seven ASEAN member countries: we’ve had a long-standing presence in Cambodia, Laos and Vietnam going back to 1993. We’ve subsequently extended our operations to Thailand in 2003, then to the Philippines and Indonesia, and finally to Myanmar in
Exhibition
Downloaded 48 times

Laos is a resource-rich country. But these resources are regularly threatened by various factors, such as pollution, overexploitation and tourism. In addition, the management of resources often crystallizes tensions, and it is difficult to find common ground between the State, the private sector
Institutional document
Downloaded 44 times

80% of the Cambodian population live in rural areas and 45% of the working population are engaged in agriculture. The primary sector still accounts for 23% of Cambodia’s GDP, despite a steady decrease exacerbated by the effects of climate change. AFD supports the rice sector and other traditional
Institutional document
Downloaded 43 times

Cambodia’s financial sector has developed recently, particularly through microfinance institutions. Many banks have also opened in the country in recent years, which is a proof of its economic strength. AFD works with private and public institutions in this sector and supports development projects
Institutional document
Downloaded 29 times

Cambodia’s growth is one of the most robust in the region. However, the dynamism of the economy faces a number of structural weaknesses, notably related to the lack of qualifications among the workforce. AFD invests in vocational training through several avenues, ranging from support to public
Institutional document
Downloaded 35 times

Despite its low contribution to global warming, Cambodia is one of the most vulnerable countries to climate change in the world, which directly threatens the country’s prodigious biodiversity. AFD is fully committed to protecting the ecosystem and biodiversity in Cambodia. It is also active in the
Institutional document
Downloaded 51 times

In Phnom Penh, the drinking water system is of good quality. But in the provinces, the sanitation services are still largely undeveloped. AFD has been engaged in this sector in Cambodia since 2004. Therefore, it is positioned as a privileged partner of the public authorities, private operators and
Institutional document
Downloaded 93 times 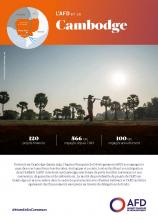 The French Development Agency or Agence Française de Développement (AFD) has been present in Cambodia since 1993. The Agency supports Cambodia in territorial, ecological and social transitions while facilitating its integration into ASEAN. AFD’s interventions in Cambodia take the form of providing