With 1.9 billion inhabitants – almost a quarter of the global population – South Asia is the world’s most populous region. Over the past few decades, South Asian countries have experienced rapid growth, enabling 320 million people to rise out of extreme poverty between 1990 and 2015. As defined in
Institutional document
Downloaded 140 times

In accordance with its intervention strategy for Asia,15 the Group sets itself three objectives in Pakistan consistent with 100% Paris Agreement commitment to low-carbon and resilient development and 100% social link: Objective 1 : support resolution of the energy crisis Objective 2 : improve
Institutional document
Downloaded 104 times 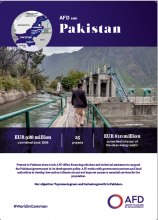 Present in Pakistan since 2006, AFD offers financing solutions and technical assistance to support the Pakistani government in its development policy. AFD works with government partners and local authorities to develop low-carbon infrastructures and improve access to essential services for the
Research document
Downloaded 1793 times

The current development of African education systems focuses on the perspective of universal completion of six years of schooling. This perspective, targeted by the international community for the year 2015 (Dakar declaration, Millennium Development Goals), will no doubt be reached by a number of
Research document
Downloaded 10035 times

This study examines the conditions for effective skills development to reduce rural poverty in Uganda. It is shown that the capacity of the vocational education and training system, despite its ongoing reform, is inadequate to reach the rural poor. An assessment of the relevant policies calls for a