The largest archipelago in the world with nearly 17,000 islands and the 6th Exclusive Economic Zone of the world (sea surface of 6 million km²), Indonesia is a country that conceives its development and international integration through its unique relationship with the oceans. More than 6 million
Institutional document
Downloaded 10 times 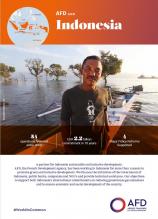 AFD’s field of intervention in Southeast Asia covers seven ASEAN member countries: we’ve had a long-standing presence in Cambodia, Laos and Vietnam going back to 1993. We’ve subsequently extended our operations to Thailand in 2003, then to the Philippines and Indonesia, and finally to Myanmar in
Institutional document
Downloaded 24 times

The “Energy Access in the G5 Sahel Countries” Conference is the first edition of an annual meeting organized by the Energy Group of the Sahel Alliance, which aimed at strengthening the coordination of the various actors and contributing to experience sharing and innovation. Coordinated by AFD in
Institutional document
Downloaded 16 times

The violence linked to the Boko Haram crisis has had an impact far beyond the birthplace of the movement in northeast Nigeria, its combat zones and the areas to which its fighters have withdrawn. The multidimensional consequences of this crisis have affected the entire sub-region of the countries
Institutional document
Downloaded 34 times

The security, humanitarian, and sociopolitical situation in the Sahel has continued to deteriorate since the 2012 crisis in Mali, with a significant increase in conflict hotspots. More than one million people, according to OCHA reports, have been forcibly displaced in the G5 Sahel countries, due to
Institutional document
Downloaded 20 times

The Central African Republic (CAR) is experiencing a situation of chronic conflict, with militant activity by armed groups spreading over a large swath of the country, including violent attacks against civilian populations. The situation is volatile and made further complex by institutional and
Institutional document
Downloaded 29 times

Cambodia’s financial sector has developed recently, particularly through microfinance institutions. Many banks have also opened in the country in recent years, which is a proof of its economic strength. AFD works with private and public institutions in this sector and supports development projects
Institutional document
Downloaded 33 times

80% of the Cambodian population live in rural areas and 45% of the working population are engaged in agriculture. The primary sector still accounts for 23% of Cambodia’s GDP, despite a steady decrease exacerbated by the effects of climate change. AFD supports the rice sector and other traditional