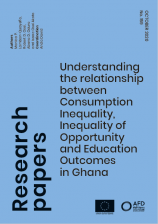 There have been calls for a shift in policy focus towards economic inequality given that it can potentially generate social instability and be harmful to economic growth in the long run. The current study examines the contribution of inequality of opportunity in consumption inequality, schooling
Research document
Downloaded 3472 times

The current development of African education systems focuses on the perspective of universal completion of six years of schooling. This perspective, targeted by the international community for the year 2015 (Dakar declaration, Millennium Development Goals), will no doubt be reached by a number of
Research document
Downloaded 3746 times

This report is an integral part of the survey and analysis work launched by the Research Department of the French Development Agency (Agence Française de Développement, AFD) on training in the informal sector in five African countries (South Africa, Benin, Cameroon, Morocco and Senegal). It was