AFD supports open data in order to share knowledge enriched by the multitude of contributors and to create digital commons that benefit everyone. The Internet and browsers constitute the most advanced library, available to all without restriction but connectivity. This hackathon illustrates the
Institutional document
Downloaded 5 times

AFD supports open data in order to share knowledge enriched by the multitude of contributors and to create digital commons that benefit everyone. The Internet and browsers constitute the most advanced library, available to all without restriction but connectivity. This hackathon illustrates the
Research document
Downloaded 146 times

The end of apartheid and Nelson Mandela’s election as President of the Republic turned a page in the history of South Africa. In 1994, some 60,000 (white) farmers held around 87 million hectares of land, while 14 million (Black) South Africans confined to the homelands shared the remaining 13
Exhibition
Research document
Downloaded 224 times

This document is a summary of the final report of the external evaluation of 15 years of AFD and FFEM interventions related to “the development of rural territories or landscapes”3 in sub-Saharan Africa. This evaluation was commissioned by AFD and conducted between June 2016 and December 2017 by
Video
Viewed 542 times

Marsabit forest, a natural space surrounded by desert, covers an area of over 16,000 hectares. This region in the North of Kenya hosts a core resource for neighboring communities and significant biodiversity. Rare species like elephants or Grévy zebras can be found there. Kenyans have growing needs
Evaluation document
Downloaded 15 times 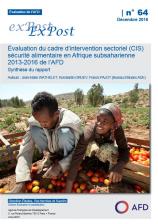 Enhancing the productivity of agriculture is vital for Sub-Saharan Africa's economic future and is one of the most important tools to end extreme poverty and boost shared prosperity in the region. How governments elect to spend public resources has significant development impact in this regard
Research document
Downloaded 1252 times