Present in the East Africa region for more than 20 years, AFD has been working with the cities bordering Lake Victoria to improve access to clean water and sanitations for the population. A long term partnership that raised concerns about the preservation of this Ecosystem, sustaining more than 40
Institutional document
Downloaded 116 times

Based in Nairobi, the Eastern Africa Regional Office covers eleven countries: Burundi, Djibouti, Eritrea, Ethiopia, Kenya, Uganda, Rwanda, Somalia, Sudan, South Sudan and Tanzania. This regional strategy is a vector for the diversification and growth of AFD Group’s activity in the region and is
Institutional document
Downloaded 18 times

AFD and the energy sector in Tanzania 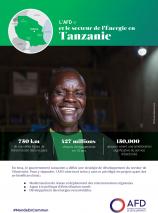 In 2014, the Tanzanian government defined a strategy for the development of the electricity sector. To meet its objectives, AFD operates according to 3 strategic lines of action, with a focus on projects with climate co-benefits: Modernization of the grid and roll-out of regional
Institutional document
Downloaded 21 times

AFD and the water and sanitation sector in Tanzania 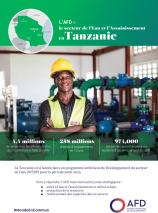 Tanzania has embarked on an ambitious Water Sector Development Program (WSDP) for the period 2006-2025. To meet its objectives, AFD operates according to 3 strategic lines of action: Access to water and sanitation in urban areas Protection of the resource Capacity building in the sector
Institutional document
Downloaded 11 times 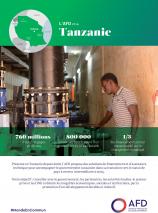 Present in Tanzania since 2008, AFD – the French Development Agency – offers financing solutions and technical assistance to support the Tanzanian government in achieving middle-income status by 2025. Our objective: to work together with the government, partners, local authorities, private sector
Video
Viewed 99 times

Dona Mena is a cashew producer in the Gilé reserve in Mozambique. AFD is funding a project there which aims to contribute to strengthening the cashew nut sector in order to allow a sustainable improvement of farmers' incomes while preserving natural resources. ©AFD2020
Video
Viewed 237 times

The project aims to contribute to the strengthening of the cashew nut sector in order to allow a sustainable improvement of farmers' incomes while preserving natural resources. ©AFD2020
Video
Viewed 203 times

Like many other Protected Areas in the country, the Gilé National Reserve has suffered greatly from 25 years of conflict, war of independence and civil war. She was also very affected by the recurrent lack of human and financial resources during the post-war period. Today, it continues to face
Institutional document
Downloaded 45 times

Research is a fundamental first step toward designing successful development projects, as it gives important insights into the political, socio-economic and environmental context in which projects will be implemented. Research helps fine-tune development projects to the realities on the ground, as