The political will to promote industry in Egypt has thus been affirmed for many years, under a variety of strategies. To what extent has Egypt’s industrial performance matched the effort invested? Has not the country’s political commitment to industrialisation run afoul of economic reality? This
Research document
Downloaded 3027 times 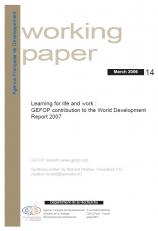 GEFOP is a group of vocational training experts set up by the AFD. It brings together vocational training researchers, managers and practitioners from Europe, Africa and Asia, as well as training specialists from international organisations. The contribution to the 2007 World Development Report
Research document
Downloaded 985 times 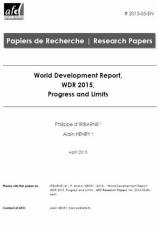 The innovative World Bank Report Mind, Society, and Behavior (WDR 2015) offers great prospects, focusing on the way in which human beings act according to the meaning they give to situations in which they find themselves. It does consider this way of acting as obeying forms of rationality that
Research document
Downloaded 882 times

Since 2008, the countries of the Middle East and North Africa (MENA) have been affected by different kinds of shocks. The international financial crisis and then the euro-zone sovereign debt crisis have brought on a sharp slowdown in the growth of goods and services exports from the MENA countries
Research document
Downloaded 1597 times 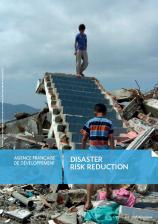 Every year, disasters related to natural hazards have huge human and economic repercussions. This is particularly the case in countries where AFD operates. A key reason for this is that these countries often do not have the capacity to prevent or respond effectively to natural hazards. Without
Research document
Downloaded 5784 times

Climate change has become the most important global issue of our time and now occupies a key place on the global governance agenda. Recent attempts to create a concrete framework for mitigation have fallen short. This failure has been explored in a number of studies. These have mostly focused on
Research document
Downloaded 2757 times

Decentralisation and the Free Basic Water Policy in South Africa: What Role for the Private Sector?

Within the debate on the private sector‘s role in SubSaharan Africa, the authors were prompted to undertake a more detailed examination of South Africa as a country that is prioritising service access for the very poor. More specifically, they concentrate on three lines of inquiry: (i) How can
Evaluation document
Downloaded 865 times