The city of Djibouti is home to 75 % of the total population of the eponymous country. Increasing urbanization has led to the explosion of the Balbala district.  The result is a disorganized urban fabric, where water and sanitation networks are almost non-existent. Its disadvantaged population thus
Research document
Downloaded 0 times 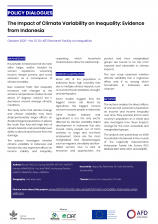 Households in Indonesia that are rural, older, larger, and/or headed by women experience worsening income, deeper poverty, and social exclusion as a consequence of climate instability.  New research finds that inequality increases with changes at the extreme temperatures (below 18 and above 27
Research document
Downloaded 33 times 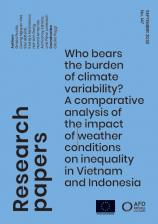 Is climate variability regressive? One argument could be as follows: People living in areas with high risk of climate hazards usually correspond to the most disadvantaged populations. Due to existing structural inequalities, they have limited opportunities to cope with climate hazards and often
Institutional document
Downloaded 45 times

AFD has been working in Indonesia for more than 10 years to promote green and inclusive development. We finance the initiatives of the Government of Indonesia, public banks, companies and NGO’s and provide technical assistance. Our objectives: to support both Indonesia’s international commitments
Research document
Downloaded 0 times

Climate Variability and Inequality: Comparing the Experiences of Indonesia and Vietnam 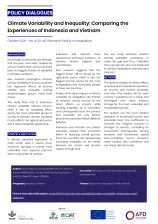 Households in Indonesia and Vietnam that are poor, rural, older, headed by women, and/or from ethnic minorities bear the biggest burden of variability in climatic conditions. New research investigates whether climate variability in the two countries has regressive effects on income stability and
Research document
Downloaded 103 times

Ecuador adopted the U.S. dollar as its legal tender in January 2000, in a context of deep economic and political crisis. Almost two decades later in December 2019, the Executive Board of the International Monetary Fund (IMF) approved a total disbursement of US$498 million after the completion of
Institutional document
Downloaded 44 times

AFD is the first agency to be 100% in line with the Paris Agreement and to make strong commitments on climate financing by supporting the transformation of financial actors' practices and promoting sustainable financing. This leaflet aims at presenting AFD’s offer to public banks, particularly in