The Mekong River is a common good and its fairly-shared management can be a source of peace and development. This delta is one the biggest water reservoirs in the world along with Amazonia. 80 million people directly or indirectly rely on this delta for their living. The Mekong’s efficient
Research document
Downloaded 1113 times

A comparative analysis of agroecology network led to a classification based on their conditions of emergence, their structure and governance mechanisms. The study points the strengths and weaknesses of the existing networks at the different scales. It shows that the different agroecology schools
Institutional document
Downloaded 5 times

The largest archipelago in the world with nearly 17,000 islands and the 6th Exclusive Economic Zone of the world (sea surface of 6 million km²), Indonesia is a country that conceives its development and international integration through its unique relationship with the oceans. More than 6 million
Research document
Downloaded 3 times 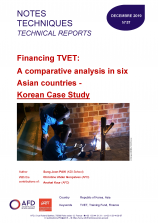 Thailand is currently the world‘s leading exporter of natural rubber, accounting for 33% of the annual volume traded. In addition to its quantitative performance, the case of Thailand is noteworthy in that this output is driven by smallholders, who own 95% of the total area planted with rubber
Institutional document
Downloaded 22 times

Despite its low contribution to global warming, Cambodia is one of the most vulnerable countries to climate change in the world, which directly threatens the country’s prodigious biodiversity. AFD is fully committed to protecting the ecosystem and biodiversity in Cambodia. It is also active in the
Institutional document
Downloaded 19 times

Cambodia’s growth is one of the most robust in the region. However, the dynamism of the economy faces a number of structural weaknesses, notably related to the lack of qualifications among the workforce. AFD invests in vocational training through several avenues, ranging from support to public