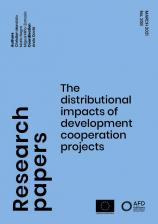 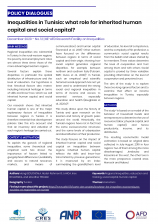 Regional inequalities are substantial in Tunisia. In the rural western regions, the poverty and unemployment rates are almost three times those of the more advantaged eastern regions. Several factors explain these disparities, in particular the spatial distribution of infrastructure and the level
Research document
Downloaded 26 times

This paper explores trends in wage and income levels and inequality and mobility in Egypt, especially since 2012. Data are from the 1998, 2006, 2012, and 2018 waves of the Egypt Labor Market Panel Survey (ELMPS). The findings point to declining real wages and incomes and a rise in inequality
Research document
Downloaded 26 times

This paper conducts a detailed analysis of the trends and patterns of women’s role in household non-agricultural enterprises in Egypt. The paper uses the Egypt Labor Market Panel Survey (ELMPS) waves of 1998, 2006, 2012 and 2018. First, the paper examines whether households have enterprises and how
Research document
Downloaded 11 times

This paper examines the relationship between internal, international, and return migration in Egypt. Using the Egypt Labor Market Panel Survey (ELMPS), this paper documents the evolution and patterns of internal migration over time. We examine patterns and trends of international and return
Video
Viewed 1049 times